Tata H7X, as it has been known as of today, is christened Buzzard. It will enter markets later this year. All the while, Tata Motors has been releasing teaser images at regular intervals detailed various design aspects of the Buzzard 7 seater SUV. 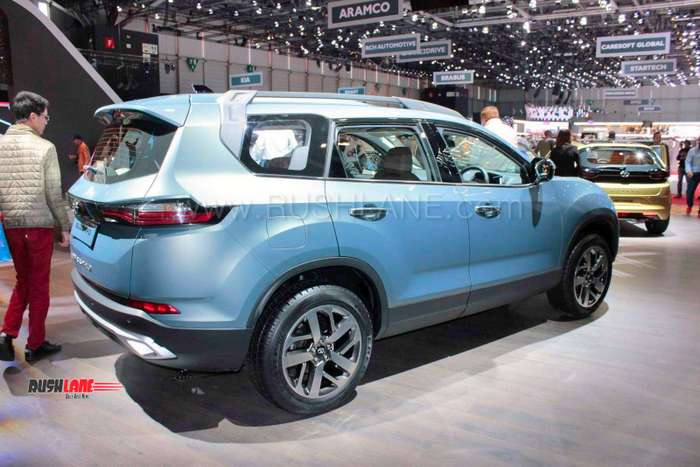 Tata Buzzard 7 seater Harrier SUV will sport Impact 2.0 design language. It will get underpinned by the OMEGA platform, which is based on the D8 Architecture on which Land Rover Freelander and Discovery Sport are built. It will get roof rails, 18″ wheels, an upright tailgate, large rear quarter glass and increased cabin space with foldable seats in second and third row. To offer better head room to passengers in the third row, the roofline is not sloping towards the rear, as is the case of Harrier’s roofline. Buzzard is also a good 62mm longer than the Harrier.

Cabin commands several driver and passenger comforts. They include a large 8.8″ touchscreen infotainment system offering Apple CarPlay, Android Auto and MirrorLink along with a 7.1” color screen on instrument cluster for MID. AC vents are seen at the rear along with separate charging points, while in terms of safety features, H7X gets hill hold assist, rear parking camera with sensors, brake assist, airbags, traction control along with ABS and EBD as standard.

Tata Buzzard will also share its engine specifications with Harrier. This 2.0L Kryotec diesel engine on the Harrier offers 140 bhp power and 350 Nm torque which will be increased to 170 hp on the Buzzard. The engine will get mated to a 6 speed manual gearbox and a Hyundai sourced 6-speed torque converter automatic.

Tata Buzzard could carry a premium price tag starting from around Rs.15 lakhs, while in terms of competition it will take on the Mahindra XUV500 in the segment. More details will be revealed when the SUV is launched in India later this year, or at 2020 Auto Expo. Until then, take a look at the image gallery below.