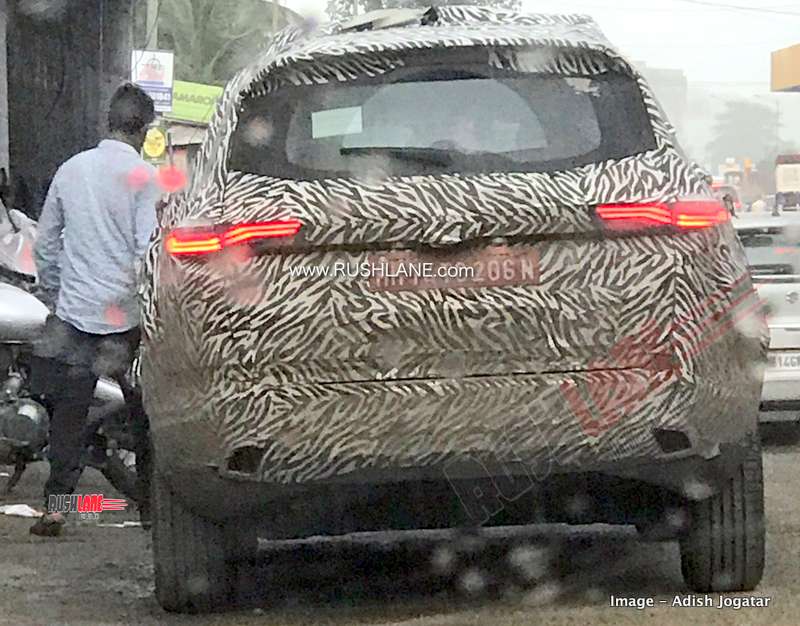 What was showcased as Tata Buzzard at the Geneva Motor Show, is currently undergoing testing in India. The larger variant of Harrier 5 seater, Buzzard is a 7 seater SUV, which will launch in India in the coming months.

Automotive enthusiast Adish Jogatar has managed to spot the on test Tata SUV, where it reveals its new LED tail lights, which are different than the Harrier. The Buzzard was testing along side the Harrier 5 seater, which was not camouflaged, but was seen with red number plates. Probably undergoing BS6 testing.

Speaking about the Buzzard, it will be offered in same 4 variants, as Harrier. These are -XE, XM, XT and top-spec XZ. As compared to the 5 seater Harrier, the Buzzard will sit on large 18” alloy wheels with all four disc brakes, get a larger rear quarter glass and extended overhangs so as to accommodate third row seating, and differently designed boot lid and tail lamps. 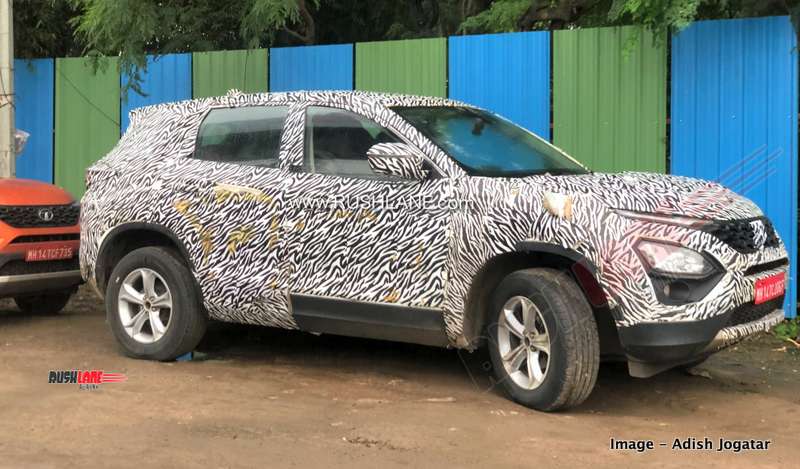 In terms of dimensions, the Tata Buzzard, though positioned on the same OMEGA-ARC platform as seen on the Harrier, it gets longer by 63mm to 4,661mm and taller by 80 mm to now stand 1,786mm. Spy shots also captured protrusions on the roof, which could imply that it will get sunroof from launch, and not as accessory that is offered with Harrier currently.

Interiors of the 7 seater Buzzard will be shared with the 5 seater Harrier. It could get an 8.8” touchscreen infotainment system supporting Apple CarPlay and Android Auto, a 9 speaker JBL audio system, 7” color MID on the instrument cluster. It will get a total of 6 airbags, hill hold assist, hill descent control, traction control and ESP while ABS, EBD and rear parking sensors are offered as standard.

Launch name of the SUV for India will not be Buzzard. It is expected to be named Tata Cassini. The company has already registered the name. Name Cassini is inspired by the Casini-Huygens mission, a joint venture between NASA, the European Space Agency and the Italian Space Agency.

Engine specifications on the Tata Buzzard will include a 2.0 liter Kryotec BS VI compliant engine offering 170 bhp power and 350 Nm torque mated to a 6 speed manual gearbox and a Hyundai sourced 6 speed torque converter automatic. It is expected to be BS6 ready from day 1. Launch price is expected in the Rs 14-18 lakh, ex-sh, range. Once launched, it will take on the likes of Mahindra XUV500 and the upcoming MG Hector 7 seater.