Aiming to capitalize on positive consumer sentiments during the festive season, Tata Motors has launched attractive discounts and benefits on most of its cars. The company needs to gain traction this month, as sales have dived to their lowest point in the last two months. YoY sales had dropped -56.06% in September and about 60% in Aug, the biggest loss for the company in recent past.

However, the good thing is that most carmakers including Tata Motors have reported positive MoM growth in September. Tata Motors sold 8,091 units in September as compared to 7,316 in August, which is MoM growth of 10.68%. Discounts and benefits being offered by Tata Motors seem to be working in its favour. MoM sales are likely to improve further, as the company has launched special Navratri and Diwali offers in October.

Tata Tiago was once among the bestselling Tata cars in the country. However sales were down -67.26% YoY in August. To revive sales, the company has launched a limited edition called Tiago Wizz, which comes with new features and upgrades. Existing Tiago model is available with cash discount of Rs 25k, exchange bonus worth 15k and 5k corporate discount. 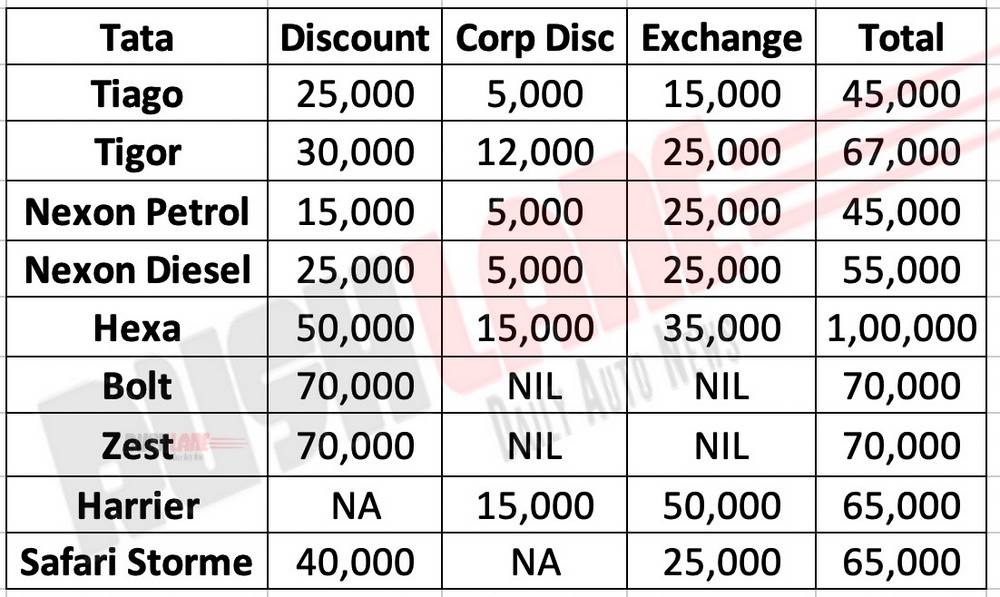 Tata Tigor sales have been affected due to slowdown, but it remains a popular choice in compact sedan segment. In August, Tigor was ranked at fourth spot with sales of 833 units. Tigor is currently available with 30k cash discount, 25k exchange bonus and 12k corporate discount.

Tata Bolt and Zest have witnessed sharp fall in sales in recent times. In August, Bolt registered -81.89% YoY loss in sales whereas Zest was at -69.50%. Both Zest and Bolt are available with cash discount of Rs 70k.

Tata Nexon once used to be ranked second bestselling compact SUV, next only to Maruti Suzuki Brezza. However, sales have been hit due to slowdown and launch of rival products such as Hyundai Venue and Mahindra XUV300. Nexon is currently available with 15k cash discount (petrol variant), 25k cash discount (diesel variant), 25k exchange bonus and 5k corporate discount.

Tata Hexa had lost more than 80% sales in August 2019. It is being offered with 50k cash discount, 35k exchange bonus and 15k corporate discount.

Tata Harrier had got off to a great start, but launch of new products such as Kia Seltos and MG Hector have adversely affected its sales. Customers buying Harrier in Oct 2019 can benefit from 15k corporate discount and 50k exchange bonus. Hat tip to Motor Arena India for sharing the details.

Tata Safari Storme – Tata has about 300 units of the SUV in stock at their company plant. These are being sold at discounts of 40k and exchange offer of 25k.

Disclaimer – Discounts are offered by dealers, and they vary from dealer to dealer, depending on the stock. Please check with Tata Motors authorized dealers in your city for exact amount discount / benefit offered.