Tata Motors has displayed some decent recovery in its sales in the Passenger Vehicle segment. Majorly, it can be attributed to Tata’s strategy to keep its lineup ‘New Forever‘. In the recent past, it has brought in the Altroz, updated its Harrier (diesel) and even the Nexon (facelift for Petrol/Diesel and addition of an electric powertrain).

In the rest of FY20-21 too, Tata intends to continue with multiple product launches. It plans to bring in the Tata Harrier Petrol and the much awaited Tata Gravitas, which is technically a larger version of the Harrier itself. Recently, a new set of spyshots have captured both these SUVs.

The Gravitas had made its global debut at the 2019 Geneva Motor Show and later was displayed at the 2020 Auto Expo. It is based upon the same Omega architecture which also underpins the Tata Harrier. And visibly too, the Gravitas isn’t too different from the standard Harrier. The Gravitas just happens to be a little larger so that it can accommodate the third row of seats. Recently, we have seen a very similar strategy being deployed by MG Motor who now sell both, the Hector and the Hector Plus. 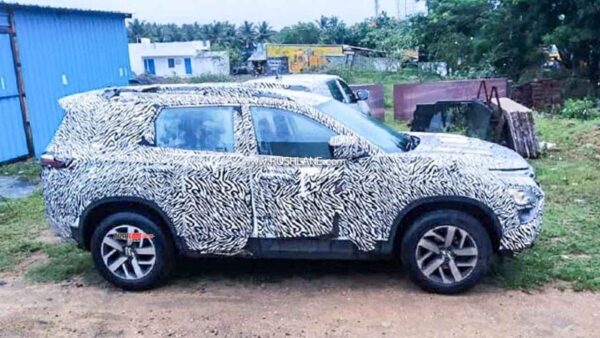 Gravitas will be sold in 2 seat configurations, 6-seater and 7-seater. Compared to the Harrier, it happens to be 80 mm higher, 72 mm wider and 63 mm longer. However, Tata has kept the engine option as well as wheelbase (2,700 mm) same as Harrier.

In case you are wondering as in why we mentioned 1.5 litre petrol as a part of Gravitas’ line-up, it is because the Harrier is scheduled to get this engine added to its powertrain options. While the exact figures haven’t been revealed, it is expected that Tata will be introducing this 168 bhp 4 cylinder petrol motor very soon. This shall ideally dish out somewhere around 250-270 Nm of max torque. Transmission options will mostly include a 6-speed MT & a 6-speed AT.

This petrol-powered Harrier should ideally help Tata Motors to bring down the entry-level price of the Harrier. Currently, the Harrier is available only with a diesel motor and hence is directly dropped off from consideration of buyers who prefer a petrol option. However, with the induction of petrol engine, the Harrier should ideally see some spike in sales. Launch of the petrol Harrier is expected to take place around the 2020 festive season.