Just like the Land Rover nomenclature, where the smaller version of the SUV is given the suffix SPORT, Tata Motors too has adopted the same for Harrier in the European market. For example, Range Rover and Range Rover Sport. Discovery and Discovery Sport. And now, Buzzard and Buzzard Sport. 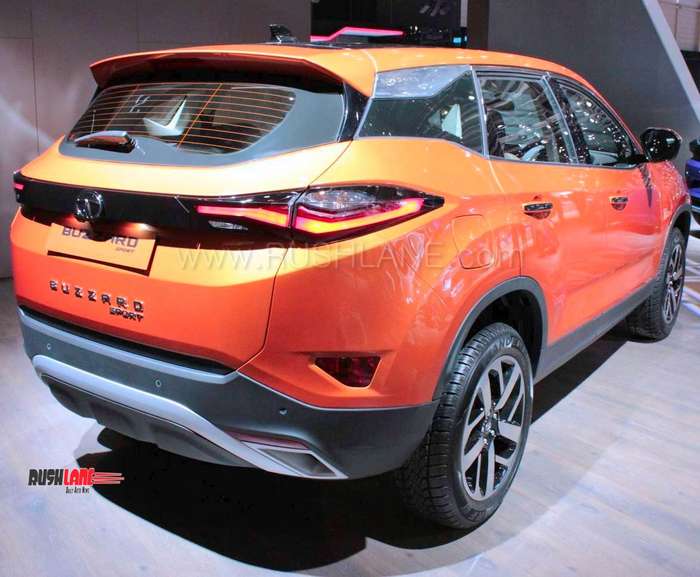 The reason Tata is not using the Harrier name in Europe, is that Toyota already has registered Harrier name for the market. This is the reason Harrier is called Buzzard in Europe. Tata Harrier, launched in India earlier this year, is a five seater SUV. It is priced from Rs.12.69 lakhs to Rs.16.25 lakhs and offered in four variants of XE, XM, XT, and XZ. It is the company’s new flagship offering and is positioned on the Land Rover derived OMEGA Arc platform. Its dimensions stand 4,598 mm long, 1,894 mm wide and 1,706 mm high, while wheelbase is at 2,741 mm and ground clearance at 205 mm.

In terms of design, the model showcased at Geneva will be seen with the same design elements as seen on the Harrier on sale in India, except for the new machine cut dual tone alloys and Buzzard Sport badge at the rear. It will get a split headlamp cluster, daytime running lamps, a large front grille, projector lamps and separate fog lamp clusters. Tata Buzzard Sport gets distinctive wheel arches. Its rear quarter is dominated by C Pillar with a floating roof design. Design elements at the rear include slim tail lamps with LEDs connected by a glossy black panel.

Tata Harrier gets several cabin comforts and safety features. It is seen with power steering, tilt and telescopic steering and all 4 power windows. It also gets a large 8.8” touchscreen infotainment system with high resolution display and 9 JBL speakers along with a fully digital 7” TFT instrument cluster. It is seen with safety features set to comply with new norms that include rear parking sensors, dual front airbags, ABS and EBD.

Tata Harrier is powered by a 2.0 liter, 4 cylinder turbocharged diesel engine which Tata Motors has christened ‘Kryotec’. This engine offers 138 bhp power and 350 Nm torque mated to a 6 speed manual transmission. The engine is tuned for three driving modes of Eco, City and Sport. Tata Harrier is positioned between the Tata Nexon and the 7 seater Tata Hexa. It competes with the Jeep Compass. Harrier has received phenomenal response in India and the company is planning to increase production.