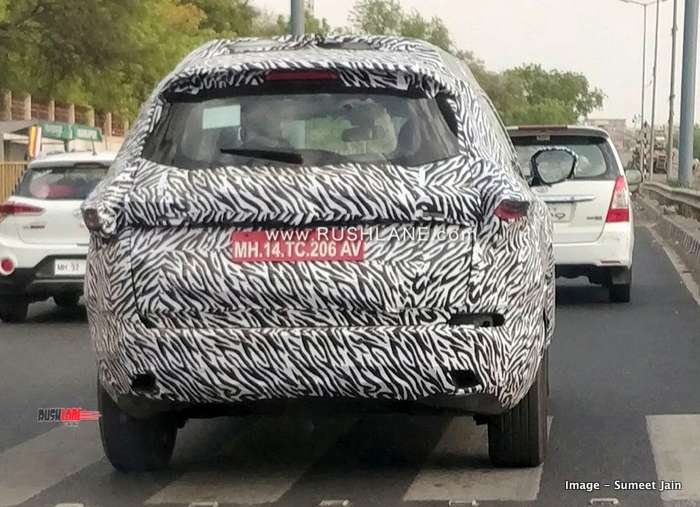 Tata Motors showcased their new 7 seater SUV, based on the Harrier at the 2019 Geneva Motor Show. Codenamed H7X, the SUV has been christened as Buzzard in Europe. Name for Indian market is still under wraps, and is expected to be revealed at a later date. As of now, it is referred to as Harrier 7 seater, or Buzzard. Reports even suggest that it will be called Cassini in India, as Tata has filed trademark for the same name.

On test in India currently, the latest spy shots are thanks to automotive enthusiast Sumeet Jain, who spotted the test car in Nagpur, Maharashtra. The car was spotted along with rival Toyota Innova. It is not clear if the test mule was being benchmarked with Toyota Innova or not.

Just like Harrier, the Buzzard too is based on Land Rover platform, which is called as Optimal Modular Efficient Global Advanced (OMEGA) Architecture. It will feature IMPACT 2.0 styling. Front end gets similar styling as Harrier. Length is 63mm longer, so as to accommodate 3rd row. Width is same and so is the wheelbase. 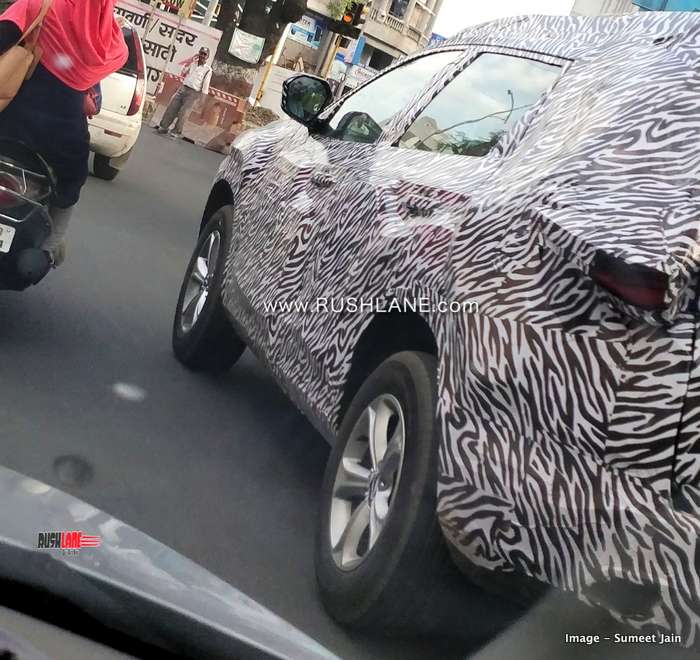 The Buzzard sports large 18” alloy wheels, same design as the ones we have seen on Harrier. It gets a longer roof too, unlike Harrier’s sloping roofline. However, it is at the rear that the two cars vary in design. The tailgate on the Buzzard is flatter as compared to that seen on the Harrier while it also gains larger rear windscreen and bumper along with differently shaped tail lamps.

Interiors of the Tata Buzzard are also inspired by its 5 seater sibling. Everything on the inside is expected to be same has Harrier. The state of the art infotainment system measuring 8.8” is compatible with Android Auto as well as Apple CarPlay. There will be leather upholstery while dashboard and door panels will be finished in a soft touch material. Mood lighting, semi digital instrument cluster, push button start, automatic climate control, park assist and various driving modes will also be on offer.

Tata Buzzard, as it is called as on date, will be powered by the same engine seen on the Harrier, tuned for more power. The 2.0 liter Fiat sourced diesel engine will now offer 170 bhp power and 350 Nm torque on the Buzzard mated to a 6 speed manual gearbox. There are also reports that Tata will debut the long awaited petrol engine with automatic transmission option with Buzzard. The same setup is then expected to be shared with Harrier 5 seater as well. Pricing is expected to be about Rs 1-2 lakh higher than Harrier, which is sold in the range of Rs 15-20 lakhs, on-road.