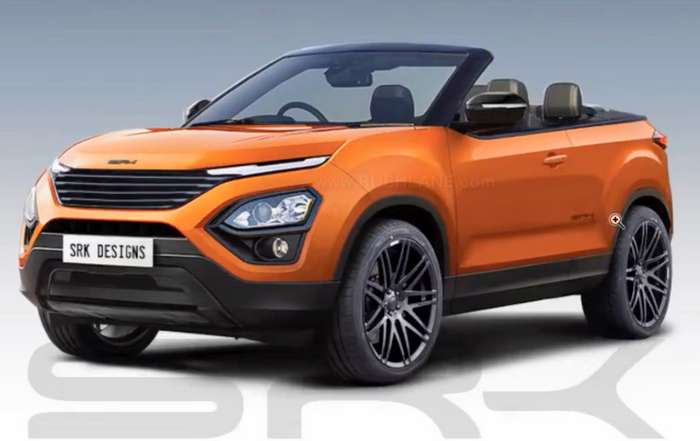 Tata Harrier, a 5 seater SUV, has been on sale in India since January 2019. It has garnered a great deal of attention from buyers in its segment due to its outstanding design, affordable pricing and powerful engine lineup. It has clocked sales over 6k sales since launch, with pending orders to the tune of 10,000 units and waiting periods extending up to 4 months.

Tata Harrier is based on the OMEGA platform, which is borrowed from Land Rover, who have used this platform on SUVs like Discovery Sport, Range Rover Evoque, etc. Tata have also stated that Based on the Harrier platform, there will be many more cars in the making, some of them which have already been teased by Tata Motors. If one of them was to be a convertible variant, how would it look?

SRK Designs has shared a render of the Tata Harrier wearing a convertible stance. It is a regular version of the Harrier of which the roof has been completely removed. It sports a two door format with rear doors removed while it also receives a new windshield with a black border. The wheel arches too sport a different look with sportier big rim alloy wheels. To enhance its sporty appeal, a new front grille design and a new front bumper are also seen on the render and it is also painted in a more eye catching exterior colour scheme. Watch the detailed video by SRK, which shows how the render was created, below.

Convertible cars in India are not so popular considering the varying weather conditions. This is also the reason why there are so less options on offer when it comes to buying convertible cars. The Land Rover Range Rover Evoque convertible has received some response in India, but is priced in a segment which is out of the majority of car buyers in the country.

Tata Harrier is only offered with a diesel engine, and a manual transmission as of now. It will get automatic and petrol engine option at a later date. It is priced from Rs.12.70-16.26 lakhs and competes against the Hyundai Creta, Jeep Compass and the soon to be launched MG Hector.