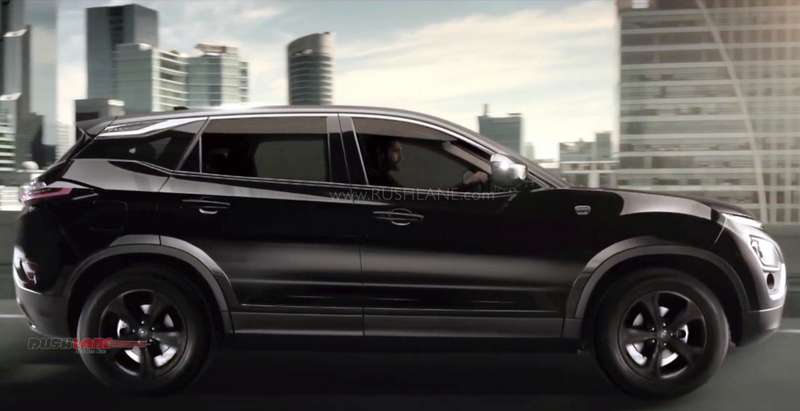 Tata Motors and MG Motors appear to be in a competition to gain attention in the premium SUV segment in India. Following the successful launch of the Tata Harrier earlier this year, the MG Hector came in June 2019 to steal the limelight away from the Harrier. It was then than Tata Motors brought in the dual toned Harrier to gain some traction but was yet unable to compete favorably in terms of sales.

Now Tata Motors has announced a new Dark Edition of the Harrier. This is basically the much awaited Atlas Black paint scheme, which was announced by the dealer back in Feb 2019, but was never launched till date.

This all black edition will be added to the colour palate of the Tata Harrier which is also sold in colour options of Calisto Copper, Thermisto Gold, Ariel Silver, Telesto Grey and Orcus White along with the dual tone version. But unlike the other colours, the Dark Edition colour is a limited edition.

Speaking about the interiors of the Harrier Dark, it gets a blacked out colour scheme as against a brown colour seen on the regular version. Seating gets Benecke-Kaliko Blackstone leather upholstery with grey stitching while the faux wood finished dashboard is also seen in a matte grey color scheme.

It also receive black door panels and leather wrapped interior door handles. All other interior features, infotainment and design elements remain the same as that seen on the regular Harrier.

On board mechanics will continue with the 2.0 liter, 4 cylinder Kryotec engine offering 140 PS power at 3,750 rpm and 350 Nm torque at 1,750-2,500 rpm mated to a 6 speed manual gearbox. This engine is currently BS4 compliant. The BS6 compliant engine will launch sometime next year, which will see power increased to 170 PS.