Since the time bookings opened in October last year, Harrier has put up a good show, registering bookings of more than 10K. With stunning looks powered by Impact 2.0 design philosophy, superior performance, high-end features, and aggressive pricing, 5-seater Harrier has become a popular choice in the Rs 15 lakh SUV segment.

However, colour choices are fairly limited and only a few like Calisto Copper and Orcus White complement the SUVs snazzy profile. Moreover, there’s no option for dual-tone colour scheme, which is the current flavour in the Indian auto scene. 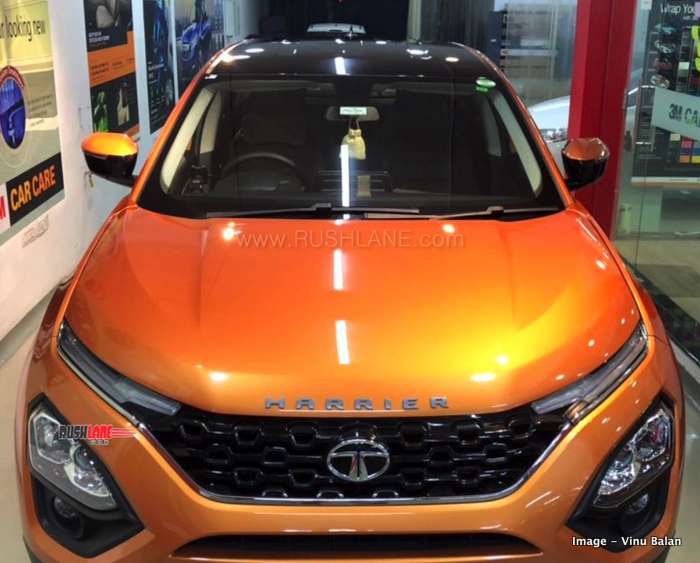 Thankfully, some dealerships are willing to go the extra mile to fulfil the specific needs and preferences of customers. In recent times, we have seen quite a few cosmetic enhancements done on Harrier at dealer level. Most recent customization has been done by a Vinu Balan, owner of a brand new Harrier. He got the mod job done at a local 3M store, and later tweeted the images to Tata Motors and their Design Head, Pratap Bose via Twitter.

This is what Vinu posted on Twitter – “@BosePratap sir and @TataMotors you may definitely wana consider offering dual tone #TataHarrier. This is what my #Petta looks after a roof wrap from @3mcarcareindia. Personally, i think the awesomeness went further higher. @ClubHarrier”. Pratap Bose retweeted the photos and the update with the caption “Super cool”, while Tata Motors official twitter handle responded – “Hi Jai, thank you for sharing your valuable feedback. We’ve shared it with the relevant team for further consideration.” This officially confirms that Tata Motors is planning on launching dual tone colour options with the Harrier. 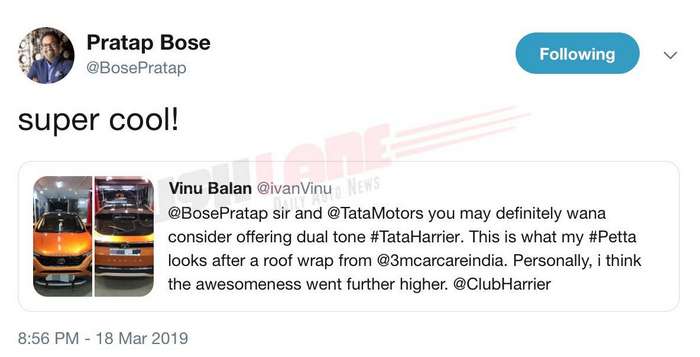 Harrier is designed to be a head turner, but with the contrasting roof, it now looks a lot more ravishing. Earlier, we had seen black roof treatment being given to Harrier Orcus White, which looks even better. Chrome strips on the windows that act as the dividing line between the white and black sections further accentuate the SUVs exterior appeal. Contrasting gloss black roof has become a popular choice and this recent customization proves that it works like magic on Harrier Orcus White. Dealers charge anywhere from Rs 20k-40k for the mod job.

As Harrier gains popularity, more such customization jobs can be carried out at dealer level. Currently, Tata Motors offers the Imaginator tool on its website, which can be used to build and book your Harrier. Customers can choose variant, colour, accessories, and various other personalization options.

Harrier is powered by a Fiat-sourced 2.0-litre diesel engine that makes 138 bhp of max power and 350 Nm of max torque. Engine is mated to a 6-speed manual transmission. Automatic variant, which will have a Hyundai-sourced 6-speed AT gearbox, is currently in test phase and expected to be launched later this year.