Ahead of Tata Harrier’s launch in early 2019, automotive enthusiasts are evaluating the possibility if Tata would be introducing a sportier version of Harrier. There is no official word as of now, but going by past trends where Tata had launched Sport variants of Tiago and Tigor (Nexon JTP launch soon), it is possible that Tata Harrier JTP could become a reality.

A conceptual render of Tata Harrier Sport SUV has been created by automotive rendering artist SRK Designs, which looks a lot more striking than the stock version. 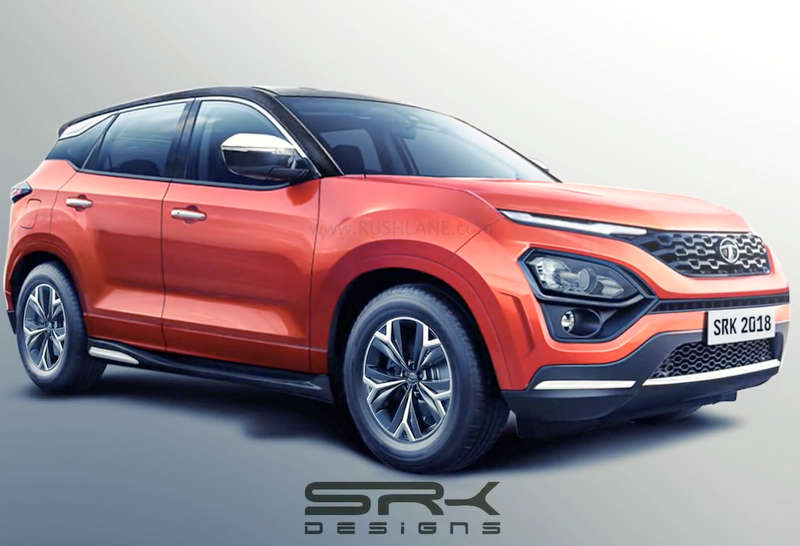 As shown in the render, Tata Harrier JTP has redesigned exteriors with body-coloured wheel arch cladding, attractive alloys, stylish headlamps, sportier front bumper with matching coloured faux skid plates, and contrasting black roof. A, B and C pillars get a black makeover, which gives the floating roof effect. Ground clearance has been reduced to give Harrier road hugging features of sports cars.

Just like Tiago JTP and Tigor JTP, Harrier will most probably use a performance enhanced version of the new turbocharged petrol engine from Tata, which is currently under development. Several changes including stiffer suspension and sportier exteriors and interiors would be among the key features of Tata Harrier JTP variant. Watch the making of the render of Harrier JTP in the video below.

At launch, Tata Harrier will only offer a diesel variant. It will be powered by a 2.0-litre turbocharged diesel engine, expected to deliver 140 bhp of max power and 320 Nm of max torque. Engine is mated to a 6-speed manual transmission. Automatic variant will be launched later and it will come with a 6-speed torque converter automatic gearbox. The gearbox will be sourced from Hyundai. By 2020, when BS-VI emission norms will take effect, Tata may also introduce a petrol variant of Harrier.

Tata Harrier stock version will be launched in 4×2 (2WD) and 4×4 (4WD) variants. Harrier is a truly world-class SUV with OMEGA Arc platform (based on Land Rover’s D8 platform), stylish exteriors and luxurious interiors. It has been designed to offer the best in comfort, convenience and safety & security. Harrier is expected to be priced in the range of Rs 13-16 lakh. It will take on rivals such as Jeep Compass and Hyundai Creta.