Set to make its global debut in the first week of December followed by launch in India in early 2019, the new Tata Harrier is on its last rounds of testing. Its recent testing in Leh follows high speed testing at a racetrack in Coimbatore earlier this month.

Being projected as the best handling SUV in its segment, the Tata Harrier will be positioned above the Hexa in the company lineup. Tata Harrier, a 5 seater SUV, has already been opened for bookings at company dealerships. 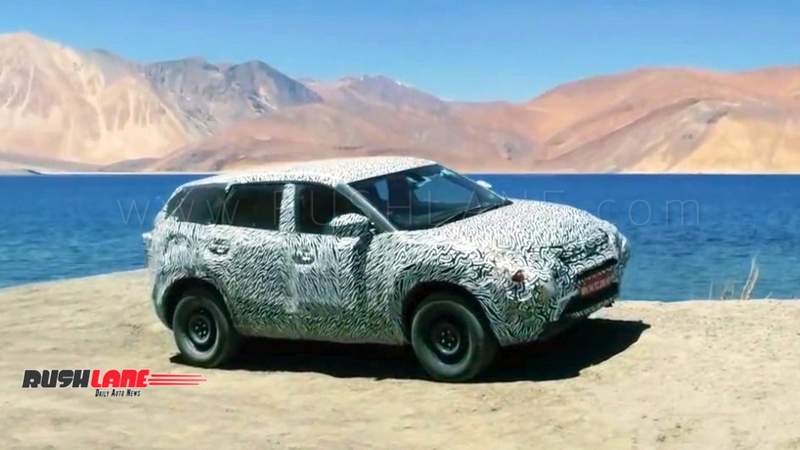 Harrier will boast of Tata’s new Optimal Modular Efficient Global Advanced Architecture (OMEGA) which is derived from Jaguar Land Rover D8 architecture and developed by Tata Motors along with JLR. The Harrier offers optimal torsional and bending stiffness so as to be equally efficient on urban and rural road conditions.

It features of massive exteriors with a large grille and distinctive headlamps. It also gets sleek LED DRLs, enormous bumpers and a floating roofline. It sits on large 17” or 18” wheels and gets a raked windscreen, blacked out B Pillar and high set tail lamps while C Pillars are seen with triangular quarter glass.

Interiors of Tata Harrier also get detailed. Its five seater layout is seen in an attractive dual tone color scheme. Seating is large with memory function on front seats along with central arm rests. Its cabin comforts include rear AC vents, steering mounted controls and will be seen with a new age of Tata infotainment systems with a Harman speaker setup and infotainment system that supports Apple CarPlay and Android Auto. Where safety is concerned, the new Harrier will get ABS and EBD offered as standard along with airbags, hill descent control, traction control and roll over mitigation.

Tata Harrier SUV will be powered by a new 2.0 Kryotec diesel engine which is a derivative of the Fiat MultiJet II engine powering the Jeep Compass. This 4 cylinder, turbocharged engine is capable of 140 PS power and 320 Nm torque mated to a 6 speed manual gearbox or a 6 speed automatic. The Harrier will go up against the likes of Hyundai Creta and Jeep Compass. Expect price to be in the Rs 13-16 lakh range.