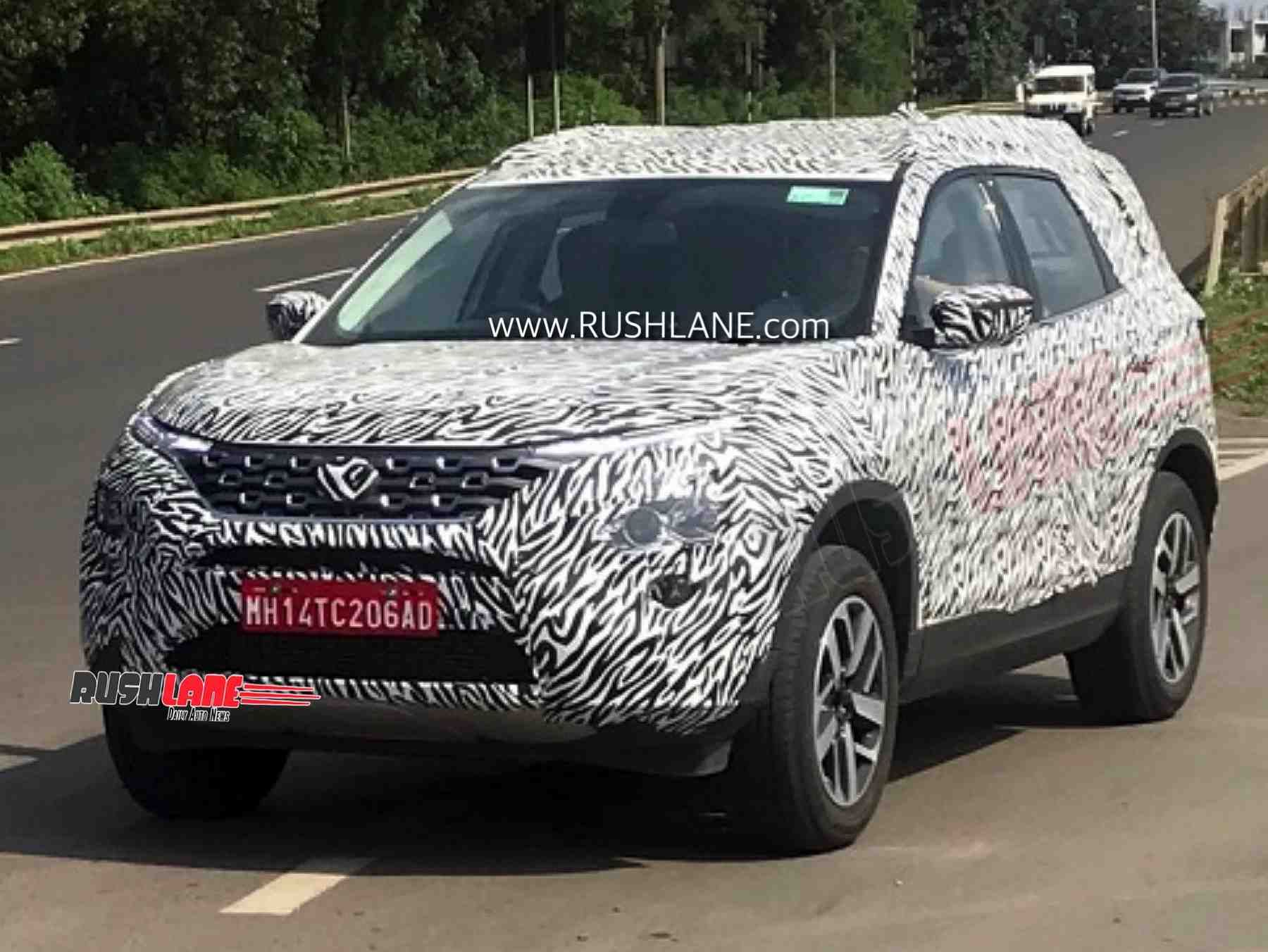 Tata Motors is getting ready to unveil at least 3 new cars next month – Altroz, Nexon facelift and Nexon EV. All three cars will be launched in India by March 2020. Apart from these, Tata has also plans to launch Harrier 7 seater and updated Harrier 5 seater.

The new Tata Harrier 7 seater SUV was recently spied on test on the Mumbai – Pune Expressway. This test mule was seemingly wearing smaller sized ORVMs, as compared to what we have seen on the earlier spy shots of the Harrier 7 seater or the existing Harrier 5 seater.

There have been cases where Tata Harrier owners have given feedback to the carmaker regarding the massive size of the outside rear view mirrors (ORVM). No doubt that these large ORVMs accentuate the overall design of the SUV, but it also creates huge blind spots for the driver, in certain scenarios. 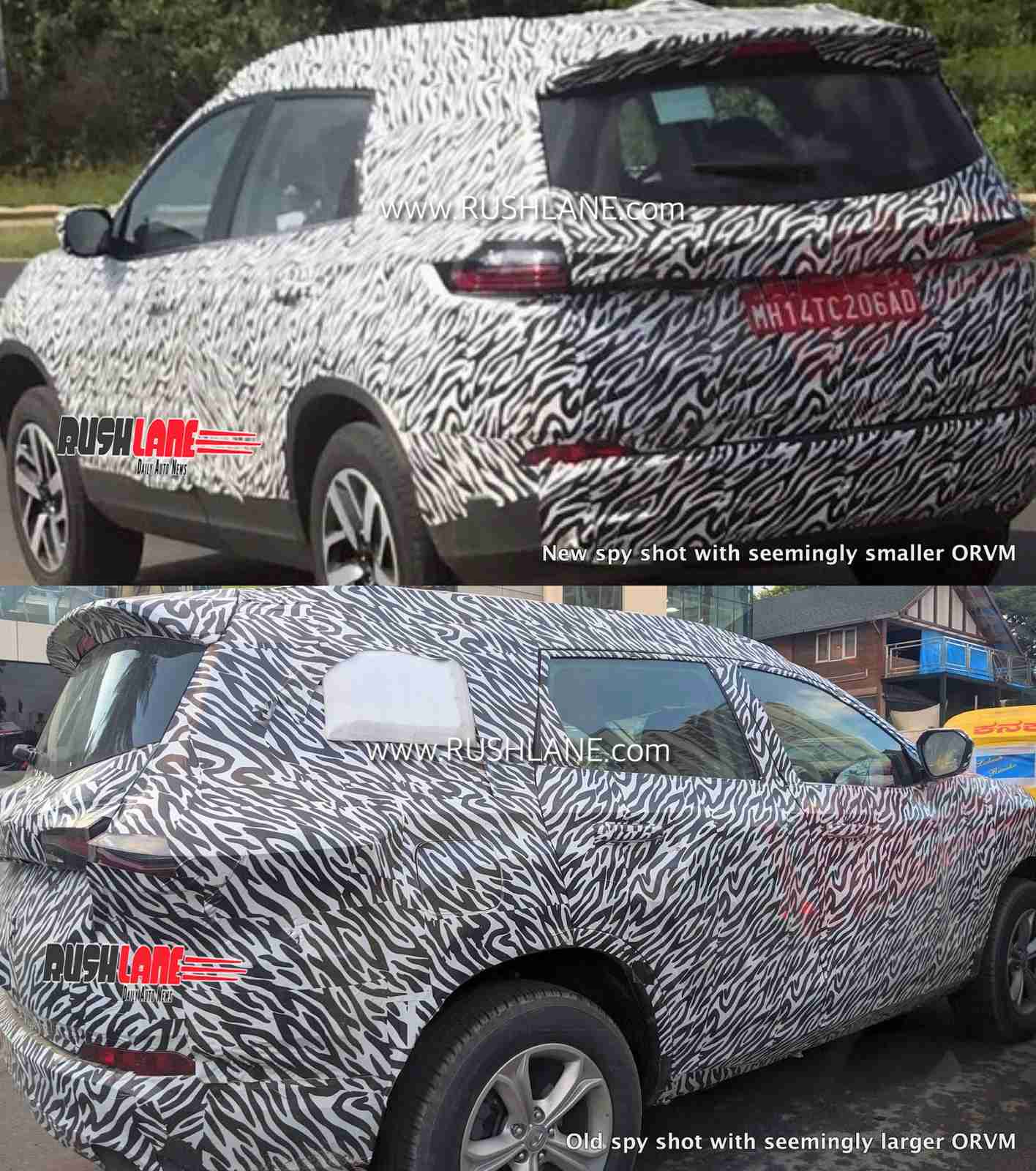 It is possible that Tata Motors has taken this feedback, and are planning on making the ORVMs slightly smaller in size. This would reduce the large blind spots and give drivers a better visibility. Above is a photo which compares the two different Harrier 7 seater test mules, wearing seemingly different sized / design ORVMs.

Showcased earlier this year at the Geneva Motor Show, the new Harrier 7 seater was given the name – Buzzard. But when launched, it will get a new name. Sharing its design with the Harrier, the Tata Buzzard will see increased dimensions to stand 63mm longer, 72mm wider and 80 mm taller as compared to the Harrier that measures 4,661mm in length, 1,894mm in width and 1,786mm in height with a wheelbase of 2,741mm. These increased dimensions are to accommodate a third row of seating.

Design elements borrowed from the Harrier include split headlamps, similar grille and bumper design but a different design for tail lamps and a flatter roof line at the rear, to accommodate 3rd row passengers. It also gets a panoramic sunroof and larger 18 inch alloys.

Powering the Buzzard will be the same engine lineup that is offered on the Harrier. This 2.0 liter turbocharged Kryotec diesel engine will offer 170 bhp power, up from 138 bhp offered on the Harrier, and 350 Nm torque mated to a 6 speed manual and 6 speed automatic gearbox. This same engine and transmission will also be offered with the Harrier 5 seater, which is currently on sale in India. Update engine will come with BS6 compliance from day 1.

Along with the 7 seater version of the Harrier SUV, Tata Motors is also testing the Harrier automatic. The automatic gearbox is likely to be sourced from Hyundai and could be the same 6 speed torque converter unit seen on the Hyundai Tucson. It is expected that the automatic transmission will be offered on the top two trims of the Harrier – XT+ and XT, which will be priced at a premium of Rs.1 lakh over its current prices of Rs. 13 lakhs to Rs. 17.07 lakhs, ex-sh.