Tata vs Kia For 3rd Spot

Last year this time, Kia Motors was leading, and so was Mahindra. In fact, it was Mahindra that held fort at third spot in Nov 2019. But in Nov 2020, despite having reported growth, finds itself on 5th spot. Kia Motors sales has grown to 21,022 units from 14,005 units at 50 percent growth. 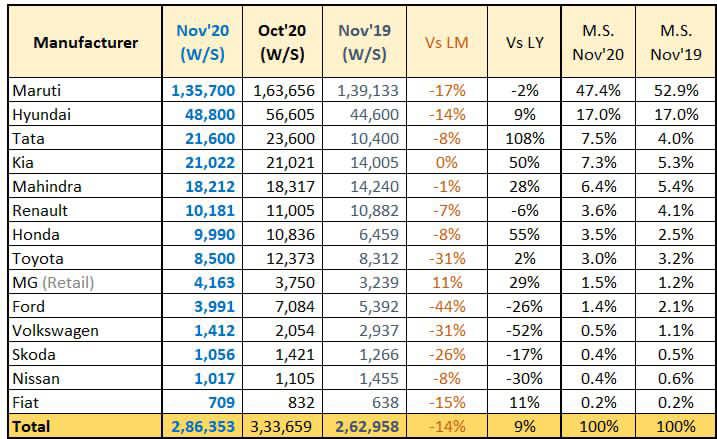 While Mahindra reports 28 percent growth for the month up at 18,212 units, up from 14,240 units, Tata Motors and Kia have both marched ahead of it. The closely fought sales dominance quest bodes well for the industry, and has helped boost overall sales growth for the Indian car industry. The auto industry re-opened for business in May 2020, and industrywide supply chain niggles and logistic issues are now back to normal with the economy attempting to limp back to normalcy.

All three manufacturers have launched a new car in 2020 to further strengthen their portfolio. Tata Motors was able to launch its Altroz premium hatch just before a nationwide lockdown was announced, and is now being able to clear pent-up demand and bookings for the vehicle.

Kia Sonet has been introduced in a competitive segment but that hasn’t hampered its progress. If anything, Sonet has further helped strengthen the segment, and last month alone 11,721 units were sold. What Kia Motors is doing on the back of 2 cars (Seltos and Sonet), Tata Motors is doing only slightly better with its arsenal of new cars. With all its cards laid bare, time will tell if Tata can hold its lead, especially since Kia Motors will introduce more cars here at regular intervals.

Mahindra being the sole ‘only UV’ maker has had success with its new Thar launch. Having being received well, waiting period now extends to May 2021, and the manufacturer has already put into motion production increase, which will come into effect from next month. Currently Thar production capacity is at 2k units a month. This is being revised to 3k units per month from January 2021.