A few weeks before the debut of Tata Tiago and Tigor JTP variants, Mayank Pareek, President of Passenger Vehicle Business Unit, Tata Motors, confirmed that the Nexon JTP is indeed on cards but it won’t be launched anytime soon. The Tata Nexon JTP is expected to make its debut in 2020 alongside a refreshed version of the regular Nexon. Both versions would be equipped with BS-VI compliant engines.

A camouflaged Tata Nexon test mule has been spotted in Mettupalayam, Coimbatore by automotive enthusiast Vijay Anand. While the prototype has no obviously clues, the location points towards JTP variant. JTP (Jayem Tata Performance) is a result of collaboration between Tata and Coimbatore-based Jayem Automotives. 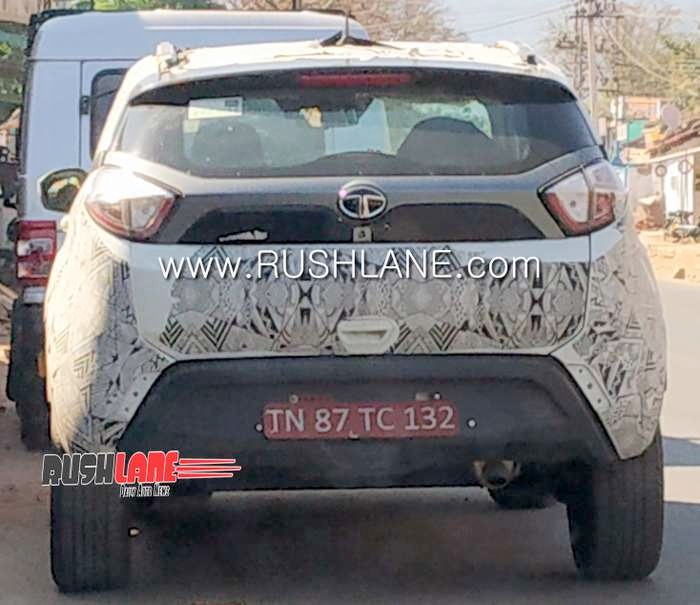 It is to be noted that the two firms have a long-standing relationship. Jayem has been contributing in testing and validation of Tata products. So, it is also possible that this prototype could simply be testing BS-VI version of the regular Nexon. The shapes of catalytic converter and tail pipe confirm that the prototype is indeed the petrol variant.

New Tata Nexon JTP variant is expected to use the same turbocharged petrol engine as the regular version but it is most likely receive a significant bump in power and torque outputs. In its current state of tune, the motor produces 110 hp and 170 Nm of torque. The 6-speed manual transmission is also expected to receive revised ratios for enhanced performance.

Tata Nexon could aim to become the most powerful compact SUV on offer in the country, which currently is the Ford EcoSport S, whose 1.0 liter 3 cyl engine delivers 125 PS. Tata Nexon JTP could be aiming to deliver power in the region of 130 PS. In addition to the pumped up engine, the Tata Nexon JTP could feature stiffened suspension system for improved handling. A brake system upgrade is also a possibility.

Visually, the performance variant of the compact crossover would feature sharper bumpers, smoked headlamps, revised grille with JTP badge, body kit, and exclusive alloy wheels. Going by the Tiago and Tigor JTP, the interior would be executed in black-red color theme.

The Tata Nexon JTP will be pitted against the Ford EcoSport S and the newly launched Mahindra XUV300. The sporty Ford SUV features stiffer suspension than regular variants. The JTP variant of Nexon would command a marginal premium over the ordinary petrol model which currently retails between INR 6.36 lakhs to 9.82 lakhs (ex-showroom, Delhi).