Gopa Kumar shared an update on Facebook, which has now gone viral. In just 4 hours, the update has received 2,000+ shares. The post talks about how he was fined by on duty traffic police, for not wearing helmet, while driving his Tata Nexon.

Translating the post to English – “One more thing to add to the history of Kerala police , I was traveling on Shasthankota Chavara route in ‘Tata Nexon’ car along with my family. I was driving the car when police stopped me and fined me for not wearing helmet.”

It was an obvious mistake on the part of the Kerala Traffic Police who could have apprehended a host of traffic defaulters at that particular spot. These could have included two and four wheelers but the fact that the challan issued to a Tata Nexon driver reads ‘No Helmet’ does cause some amusement. It is still unclear as to why Gopa Kumar was stopped by the traffic cops. He paid the fine and was released by the cops only to find that the traffic fine slip was issued because of ‘No Helmet’. 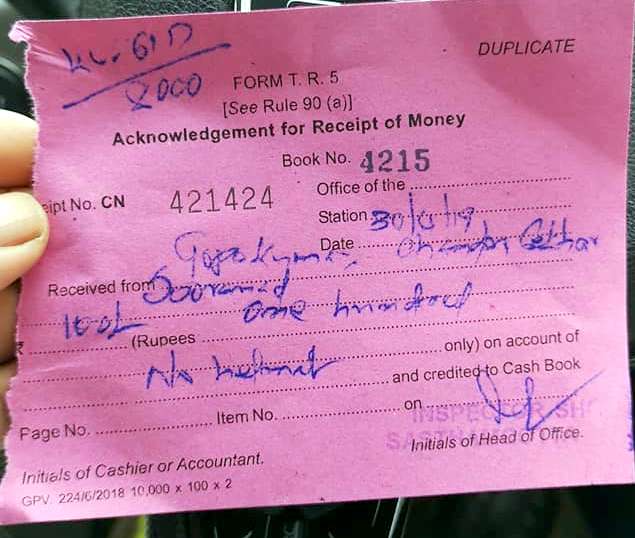 There could have been a mixup in the issuing of challans. It is obvious that this challan was prepared by the traffic cop for a two wheeler rider who was without a helmet while probably some two wheeler rider could have received a challan meant for Gopa Kumar which could be reading ‘driving without a seat belt’.

This was the very same situation reported from Goa some time ago. Bike riders have received challans mentioning wrong reasons with a rider of a Royal Enfield issued a challan for ‘not wearing a seat belt’.

In such situations, the traffic cops are in a hurry to issue receipts to all the offenders so as not to cause a traffic jam while two and four wheeler offenders want to clear their fines and leave the scene.

In India, such mistakes in issuing wrong challans is not such a major issue as most States do not keep track of fines issued to motorists, and hence the careless attitude. In other countries, collecting of more than a certain number of fines could lead to suspension of driver’s license while this could also have an adverse effect on insurance premiums.