And while that enthused audiences, for the most part because it was the first time an Indian automaker had pulled off such a feat, nothing prepares you for an actual impact. 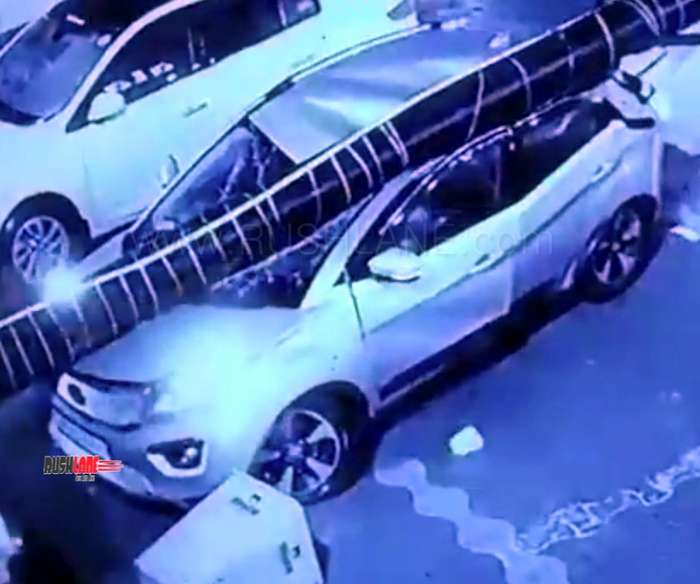 As this family found out earlier in the month. You never know what to expect when exposed to the elements. With the weather being overcast, and wind and thunderstorms for company, the occupants in this Dehradun registered Tata Nexon, decided to take cover and sit inside their Nexon, instead of standing in the open.

They couldn’t have been in a better place despite how unfavourably events unfolded. While they were seated inside the car, a sudden gush of wind unearthed the billboard pillar which was in front of the Nexon. The pillar fell straight on the car, and its occupants. Watch the incident caught by CCTV below.

But obviously it smashed all the glass to smithereens, and took the roof in, but the Nexon’s structure held out, ensuring all the occupants exited the vehicle without any help. Of course the initial shock leaves everyone running for cover until the larger group realises that someone hasn’t yet exited the car, and while they’re trying to pry open the front left door, the male occupant was able to climb over to the right of the front row and exit on his own.

The chaos that ensued in those few seconds is frighteningly nerve wrecking cause it’s anyone’s guess how this could have ended. Considering the beam and billboard weighed down the roof in structural deformity, and altered the functionality of doors. There would be precious little passers-by could have done if the occupants had been trapped.

Below are the images of the Tata Nexon in the video above, which is now getting repaired at a Tata dealership. The variant is a XZ+ trim, powered by a 1.5 liter diesel engine. The car is registered in the name of Praveen Chandra. The car was registered in Apr 2018. As per Global NCAP, Nexon’s manufactured before 7th Dec 2018 come with 4 star rating, and those manufactured post that, come with 5 star rating. The difference in stars rating is because of addition of new features like Seat Belt Reminder (SBR) in latest model.