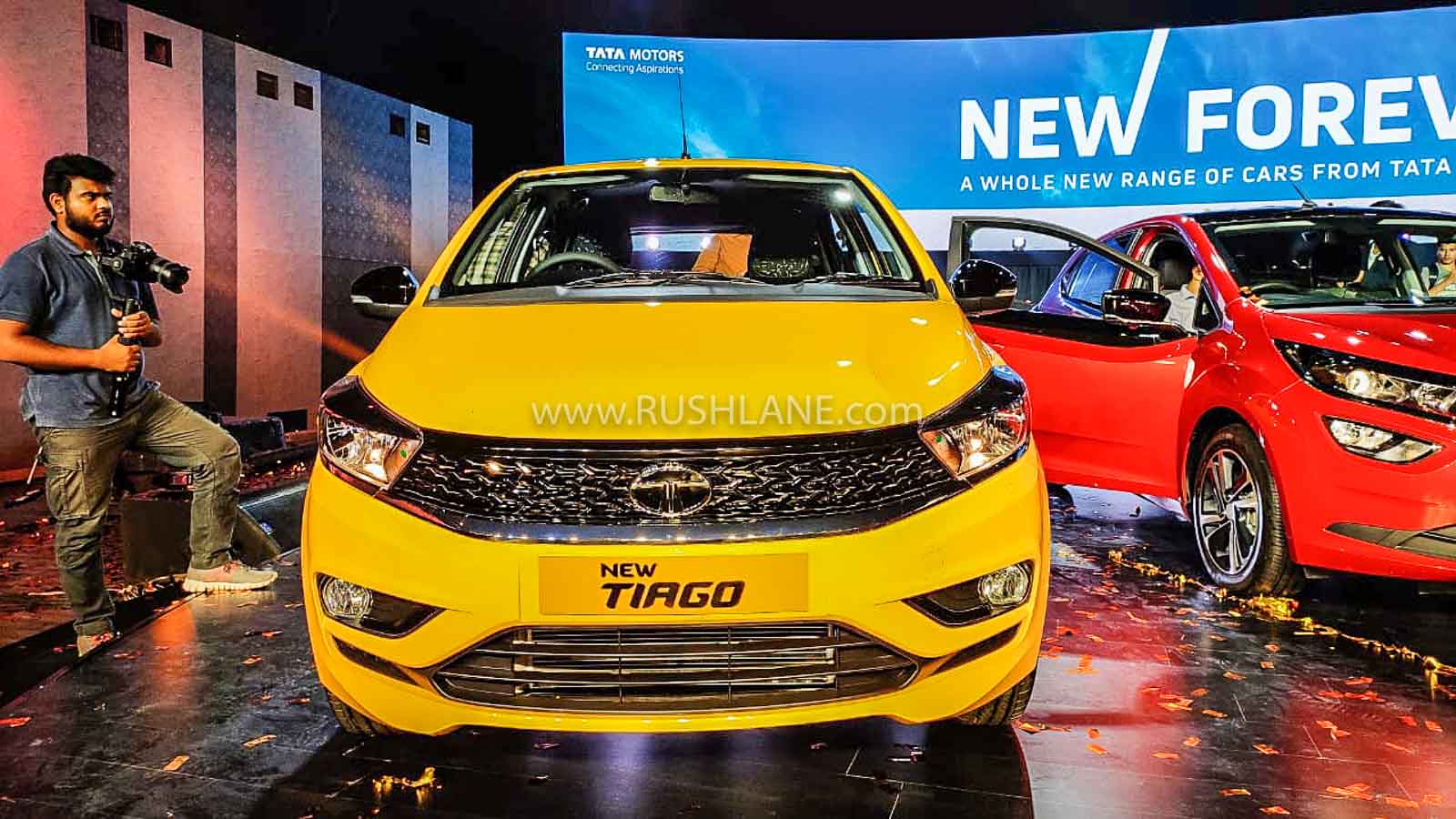 Tata Motors has gone on a launch-spree with the facelifted Tiago, Tigor, Nexon and of course, the all-new Altroz.

Prices for the 2020 Tata Tiago (which is also BS6-compliant) start at Rs 4.60 lakh for the entry-level XE variant and go up to Rs 6.60 lakh for the range-topping XZA+ variant. The prices are ex-showroom and have gone up by an average of Rs 20,000 from before.

With the facelift, Tata Motors has ditched the hatchback’s diesel engine since updating it to BS6 standards would have brought about an unreasonable price hike. Furthermore, the Tata Tiago and Tigor find much lesser takers in their diesel avatar, in comparison to the petrol variants. Hence, Tata Motors has made the right decision and might have disappointed just a few, unless none. Below is the detailed price list of BS6 Tiago.

As you can see, the changes are not limited to the power plant. The 2020 Tata Tiago has undergone a complete aesthetic revamp, especially at the front, which makes it more in line with Tata’s Impact 2.0 design philosophy, just like the Tata Altroz. Even though the design looks fresh, the top-end variant does not get projector headlamps as before.

On the inside as well, the changes are quite significant. The new flat-bottom steering wheel rests in front of a new digital instrument cluster while the climate control panel takes a new form. There is now a reverse camera park assist on offer too.

Coming to the engine compartment, the BS6-compliant 1.2-litre naturally-aspirated three-cylinder Revotron petrol engine makes around 85bhp or 86ps (up by 1ps in comparison to the BS4 model) and 113Nm of torque. Transmission duties are done by the same 5-speed gearbox or its respective AMT unit. 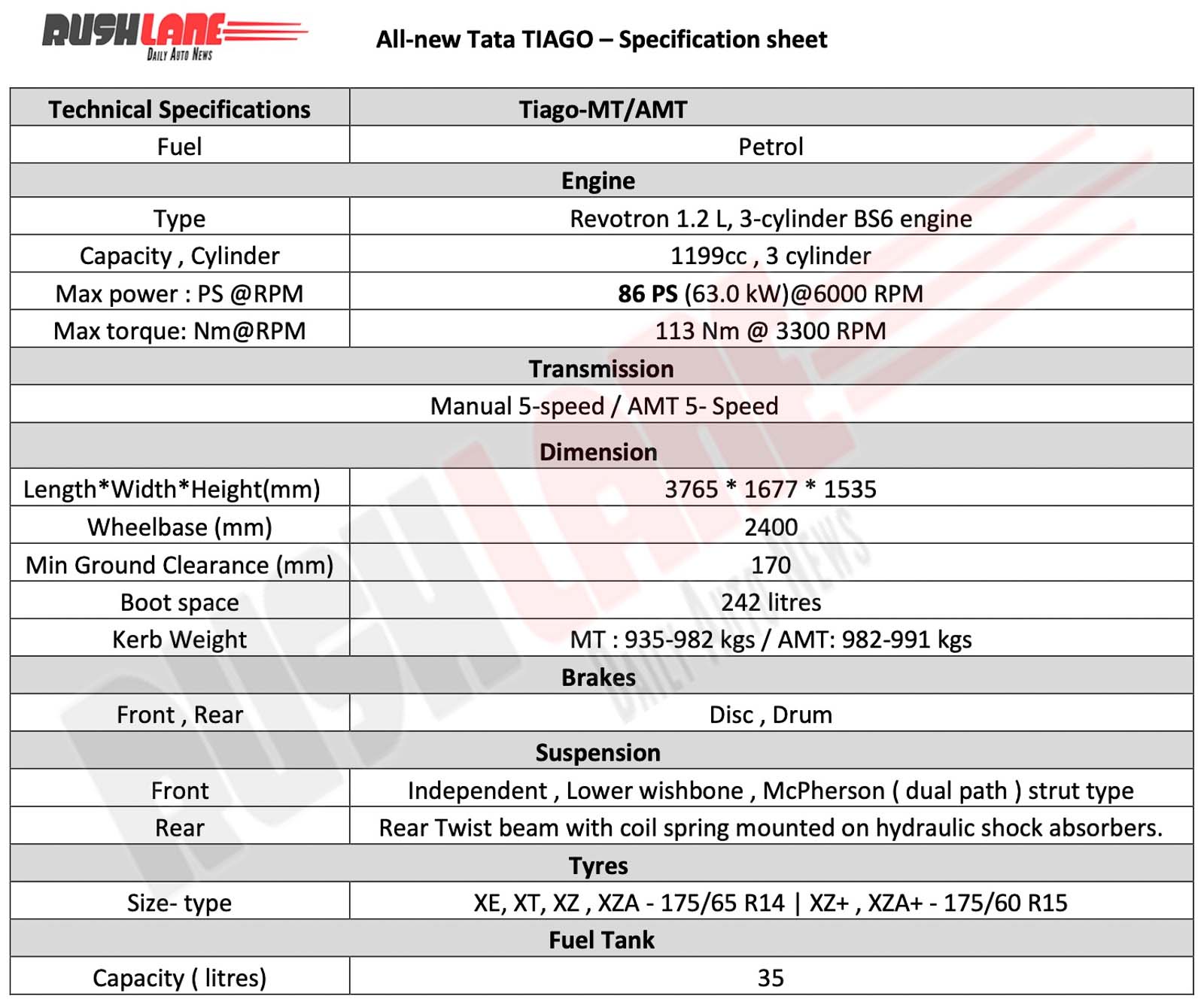 As mentioned before, there is no diesel variant any more. In its one and only BS4 format, the 1.05-litre three-cylinder Revotorq unit made 69bhp and 140Nm. The engine came with only a 5-speed manual and was notorious in terms of NVH; a primary reason why it had fewer takers.

The new Tiago facelift is available in six colours: Victory Yellow, Flame Red, Pearlescent White, Pure Silver, Daytona Grey and Tectonic Blue, alongside dual-tone choices (blacked-out roof) based on the same. With a customer base of more than 2.5 lakh, the facelifted Tata Tiago is expected to garner even more sales figures for the Indian company and maintain its position as one of the best hatchbacks available from around Rs 5 lakh.

The Tata Tiago primarily locks horns with the Hyundai Santro and Maruti Suzuki WagonR. The original Tata Tiago (which was initially called the Zica) is often considered as a gamechanger since it proved to be an instant success for Tata Motors, after ages of being known for the Indica hatchback.