Tata Motors launched a cross variant of their popular car Tiago recently called Tiago NRG. The highlight of this car was the cosmetic upgrade, as compared to the regular Tiago. And one of the many cosmetic changes seen in the Tiago NRG, were its new wheels – called DurAlloy by Tata Motors.

The market name of these wheels is named such that some readers believe that these are alloys wheels. But that is not the case. These are steel wheels, which are smartly wrapped with plastic cover, to make the wheel look like alloys. Unfortunately, one Tiago NRG owner realized this after the purchase of the car. He was shocked to see that the wheels were not alloys. This is what Arun Barathi says on Facebook – 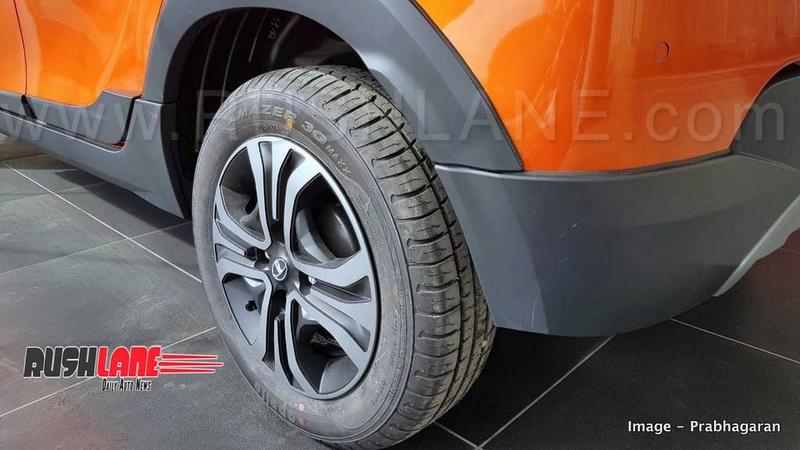 “Took delivery of Tata Tiago NRG diesel vehicle few days ago. Promotion for Tiago NRG was very impressive and one of the features which was very attractive is the alloy wheels. It has been 2 days since I’m driving this brand new Tiago NRG and to my surprise today i noticed that it not an alloy wheel as specified and it’s just a wheel cup which is made to look like alloy wheel.The wheel rim is designed thin and in such a way that it perfectly hidden beyond the wheel cup and i feel totally disappointed and being cheated.”

The marketing material of Tata Tiago NRG never clearly said that these were steel wheels wrapped with plastic cover to make it look like alloys. Even on the official site it is stated as DurAlloy. With the name alloy in the official name of the wheel, it has caused this confusion. He has shared a video below.

Speaking about the Tiago NRG, on the inside it features a contrasting theme of black and vibrant Canyon orange. The upholstery features a unique denim inspired fabric with contrasting orange stitch pattern. The central console has a 5″ touchscreen infotainment system from Harman, which also doubles up as a navigation system. Users can expect superior acoustic experience, as NRG comes with an 8 speaker, surround sound system from Harman. Interiors feature intelligently designed utility spaces and there’s a cooled glove box as well.

Seats come with body hugging bolsters that provide extra comfort to users. Driver’s seat has 6 adjustment options along with height adjustment for optimal comfort. AC vents are spread all throughout the vehicle to provide ideal cooling at the front as well as rear. Boot space has been increased to 242 L to ensure maximum space for luggage and utilities.