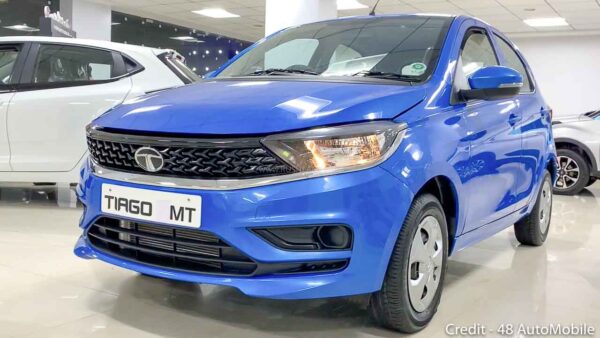 Since the last few years, Tata Motors has been very active in terms of feature list upgrades/downgrades for its models, depending upon market requirements. Continuing with the same trend, Tata Motors have now added a new feature to their entry-level hatchback, the Tiago.

Up until recently, Tiago’s mid variant (XT) missed out on steering mounted audio and phone controls. However, now dealer sources have shared updated brochure, which clearly state that the XT trim now comes along with these controls for the convenience of customers.

Before this, only the XZ and XZ+ had the steering mounted controls on offer. Steering mounted audio control is an important passive safety feature in modern day. They help the driver control car’s music system as well as respond to calls without removing hands from the steering wheel while driving.

Where Tata has added a new feature to XT trim, they have also removed a feature from the same trim. The rear parcel shelf tray is no longer on offer with the XT trim as part of the above update. Sources tell us that the feature update has resulted in a price hike for the XT trim, which is now dearer by Rs 1,000.

It is to be noted that Tata has not made any official announcement about this update yet. Dealers still have stock of XT variant minus the steering mounted controls, as can be seen in the image above. Official prices and update from Tata Motors is expected in coming days.

In terms of sales, in a span of around 55 months or so, Tiago’s production has crossed the 3 lakh units mark, which is an achievement in itself. It also happens to be the only car in the segment which comes with a 4-star safety rating from G-NCAP. In Sep 2020, sales of Tiago were over 6,000 – making it the best selling Tata car. With the addition of new feature on XT trim, Tata could be aiming for even higher sales this festive season.

In the pre-BS6 era, the Tiago was available with both diesel and petrol motors. However, with the introduction of BS 6 emission norms, Tata decided to ditch the diesel engine option. Currently, Tiago can be purchased with a 3-cylinder petrol motor which can dish out 84 hp & 113 Nm of peak torque.

There are two transmission options on offer, a 5-speed MT and an AMT. Tata also plans to bring in a more powerful version of the Tiago sometime in the future. Reports suggest that a turbocharged 1.2 litre petrol motor will be powering this turbo variant of the Tiago, which will have the capacity to dish out 99 hp & 141 Nm of torque.

Pricing of the Tiago starts at INR 4.7 lakhs for the entry-level XE MT trim while the top of the line XZA+ DT (AMT) variant costs INR 6.74 lakhs (all prices mentioned are Ex-Showroom). Overall, there are 8 variants on offer, 5 with a MT & 3 with the AMT. In terms of direct rivals, the Tiago primarily competes with the likes of Hyundai Santro & Maruti Suzuki Wagon-R.