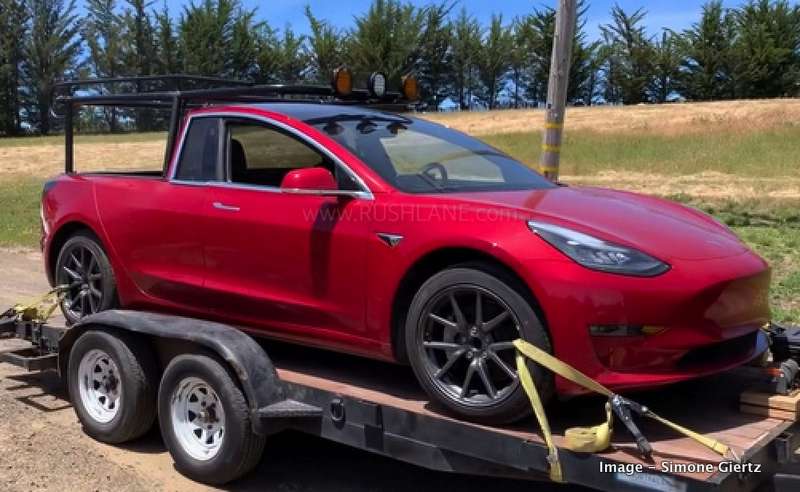 Pickup trucks have been imbibed into the American automotive culture since time immemorial. So, no matter how drastic the ongoing technological transformations (read electric propulsion systems) are, the versatile work horses are here to stay.

With Tesla and Rivian taking their time to launch electric pickup trucks, Swedish Youtuber/inventor Simone Giertz decided to take matters in her own hands and fashion an electric pickup out of a brand new Tesla Model 3. This is by far the most ambitious project Simone has undertaken and we have to say the end result is pretty interesting!

Armed with angle cutters, the lady who calls herself the ‘queen of shitty robots’ recruited a bunch of like minded garage build enthusiasts and set out on cutting an unsuspecting Telsa’s roof. The entire team didn’t know how the project is gonna go but were convinced that they will be able to improvise if they face any hurdle.

The unofficial Tesla pickup truck which is fondly called as ‘Truckla’ initially protested the modification but after once its sensors and electronic nannies are disabled, the team was able to continue removing the interior trims, wiring and other paraphernalia.

While the crew expected the car’s structural rigidity to be compromised to some extent once the roof is cut aft the B-pillar the chassis moved more than they would have liked. Given that all them are experienced builders, they acted quickly and reinforced the Truckla’s steel monocoque with roll cages and other structural members.

After a few weeks of working on the project with child-like enthusiasm, the Truckla pickup started taking shape in a nice way. The load bed came from a defunct Ford F150 while the rear window was donated by a GMC Canyon. Simone and her friends also built a fancy roof rack with spot lights to enhance the pickup’s functionality.

Like a full fledged OEM, the team of Youtubers even enlisted a film crew to shoot a professional commercial for the Truckla pickup. We thoroughly enjoyed the video and were impressed by the quality of work and passion. The build crew which included Marcos Ramirez, Laura Kampf, and Rich did an amazing job transforming an electric sedan into a neat looking pickup.

While the Truckla is fully functional, Simone says she is not done with it yet. She is planning to raise the car’s ride height, put back all the interior trims, water proof it, install a bed liner, sort out the wiring, give it a new paint job and so on.

We can’t wait to know what Elon Musk thinks about this garage build!