The best selling MPV in May’20 was the Maruti Ertiga, whose 2,353 units were dispatched to dealer partners. Last year, it had sold 8,864 units in the same month. Overall sales decline for the model stood at 73%. The second car on the list was the Mahindra Bolero which saw its sales decline by 71%. In May’20, Mahindra could dispatch 1,715 units of the Bolero compared to 5,947 units in May’19.

The third car on the list was the Renault Triber which could register sales of 931 units. The car was launched in H2 of 2019, hence there is no base figure to compare it with. The fourth car on the list was the Toyota Innova Crysta which recorded a massive 87% sales decline over last year. In May’19 it had sold 5,631 units however in May’20, the overall number fell down to just 759 units. 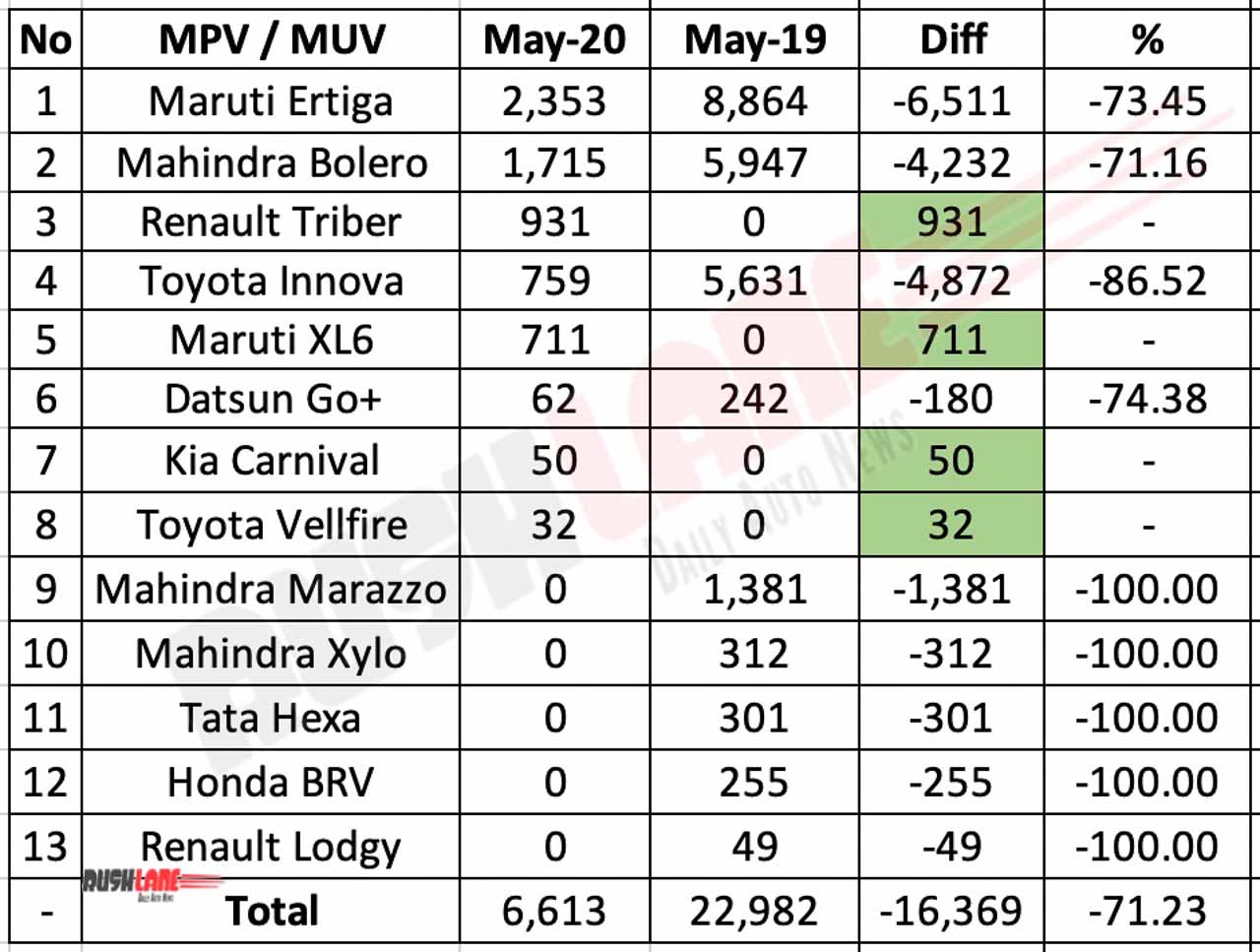 Just like the Triber, XL6 is also a new comer on the list. Its sales stood at 711 units in May’20 and it could manage the 5th spot in the list for itself. The sixth car on the list was the Datsun Go+ whose sales fell down to 2 digit numbers. Last year, in the month of May, Datsun had sold 242 units of the Go+ whereas in the month of May’20, the sales fell down to just 62 units.

While these low figures of Datsun can be attributed to the lockdown, however, overall sales for the brand in the recent months have also been on the lower side. Globally too, the brand has been facing multiple challenges and Nissan is planning on shutting operations of the brand in select countries. Final decision regarding India is yet to be made though.

Next cars on the list were the Kia Carnival and Toyota Vellfire. These two premium MPVs were launched earlier this year and offer unparalleled luxury to MPV customers. Carnival stood at the 7th spot in the sales tally with dispatch of 50 units while Vellfire clinched the 8th spot with sales of 32 units.

Sales of Mahindra Marazzo, Mahindra Xylo, Tata Hexa, Renault Lodgy and Honda BR-V stood at 0 units in May’20. Numbers are expected to go up this month, thanks to Unlock 1.0 – which was announced earlier this month. But with Covid-19 cases on the rise, there is always the fear of yet another lockdown.