Even though Maruti Ciaz holds the number one position, it has actually registered negative growth of 4% in November 2018, as compared to November 2017. Facelifted Ciaz was unable to make any significant impact on sales. Honda is offering huge discounts, which has helped City to remain price-relevant and register decent sales. At number three is Hyundai Verna with sales of 2,559 units. Skoda Rapid and Toyota Yaris have to come up with something better to move up in the list.

Maruti Ciaz was recently introduced with a facelift. This has resulted in the Ciaz being the freshest C Segment sedan in India. It is powered by a 1.5 liter K- Series petrol engine offering 104 PS power and 138 Nm torque and a 1.3 liter turbocharged diesel capable of 89 Bhp power and 200 Nm torque and both engines get mild hybrids stirring up competition even further.

Honda City on the other hand is regaled for its performance even at the end of its life cycle. It attracts buyers to its fold even despite its high price tag. It is powered by petrol and diesel engines with the petrol engine getting manual and automatic gearbox while the diesel engine gets only a manual. A Honda City hybrid variant is currently in the works while an all electric car from Honda could launch in India in 2023-24 which could be a B segment SUV.

The Verna could see better sales in December as the automaker has announced discounts and total benefits upto Rs.50,000 on both the petrol and diesel variants of this sedan. This offer is valid till 31st December or till stocks last. Hyundai is also planning to launch new automatic variants of the Verna. The Hyundai Verna SX+ AT petrol is currently priced from Rs.11.51 lakhs while the SX(O) AT diesel retails for Rs.13.99 lakhs. 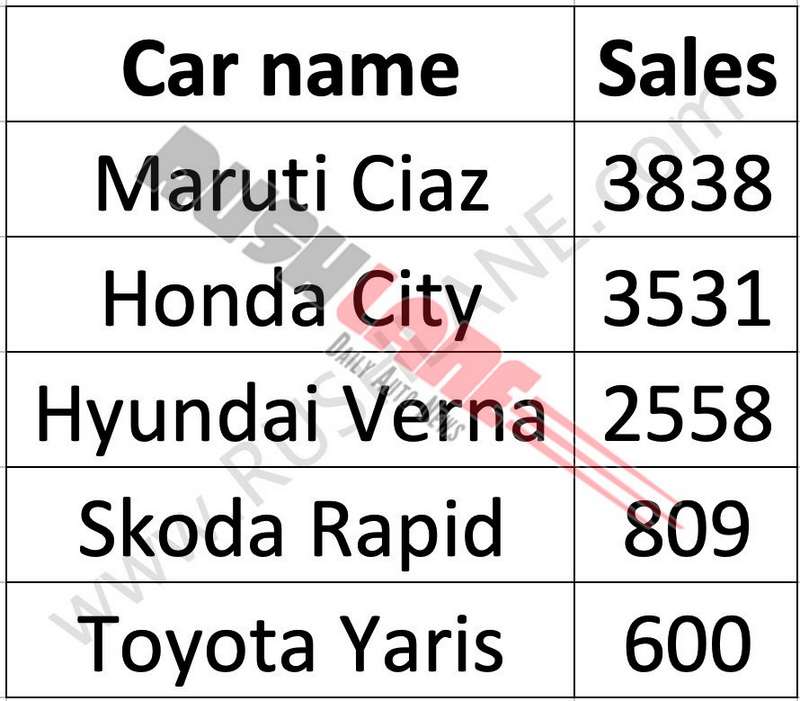 Skoda Rapid beat the Yaris for the second consecutive month. For the past six months, the Rapid is constantly selling around 850 units, though a 7 percent year on year negative growth was noted last month. Priced from Rs.7.99, the Rapid is presented in three variants – Active, Ambition and Style. Skoda also offers the ‘Edition’ model which is priced from Rs 10.99 – 13.97 lakh.

Toyota Yaris is now the company’s bestselling mass market sedan, ahead of the Corolla Altis. The slump in sales in November has prompted Toyota dealers to offer discounts to the tune of Rs. 1 lakh on the Yaris.