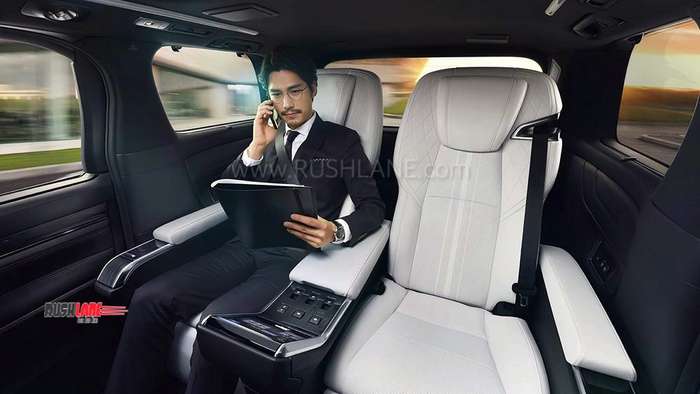 Lexus, the premium auto-making arm of Toyota today unveiled its new LM MPV at the ongoing 2019 Auto Shanghai Show. The LM draws considerable inspiration from Toyota Alphard, which in itself is a premium MPV.

Even though the LM retains a typical boxy design, it has got a refreshed design treatment from Lexus’ designers. This includes a Lexus grille at the front along with new head-lights and tail-lamps. As Lexus LM happens to be a product from Toyota’s premium arm, the LM offers more luxury features and additional space on the inside when compared to the Alphard.

As far as technical aspects are concerned, Lexus had filed trademark applications for ‘LM300h’ and ‘LM350’ last year. Going by Lexus’ nomenclature structure, it was indicative that LM will feature two powertrain options, a petrol driven motor and a petrol-electric hybrid.

During the unveiling, Lexus informed that there are two powertrain options, a petrol-electric hybrid option which features a 2.5 litre 218hp petrol-electric motor combo, which is also found on the Lexus ES 300h. The petrol-only option drives power from a 3.5 liter V6 petrol engine.

Lexus is expected to make the LM at the same facility where the Alphard is also made currently. The plant is located in Inabe, Japan. Production will most likely start by 2020 and the MPV will be sold majorly in Asian markets, where China is expected to be the major driver for numbers.

Currently in India, Lexus’ portfolio consists of ES and LS luxury sedans along with LX, NX and RX SUVs. Powertrain options include Hybrid variants for majority of the line up while there are performance-specific variants (aptly named SPORT) which are available in the NX and RX SUVs.

As far as chances of LM’s launch in India is concerned, it looks highly unlikely. At the moment, it is just the recently launched Mercedes V-Class which is available in the premium MPV segment. Currently the market doesn’t’ seem to be large enough to accommodate multiple products in the premium people-mover segment.