An update from Autocraft Customization read as follows – ‘Proud to have offered consultancy for import & clear for a client, India’s very first Alphard Executive Lounge. She is no ordinary MPV, but has features, interiors & comfort levels akin / surpassing any of the worlds finest airline’s First Class cabins.’

Prior to the current Alphard Executive Lounge import, Alphard variants have been part of fleets in expensive luxury car rental companies, and often spotted in Delhi’s diplomat area. Late DMK president, M. Karunanidhi had a Alphard in his garage. 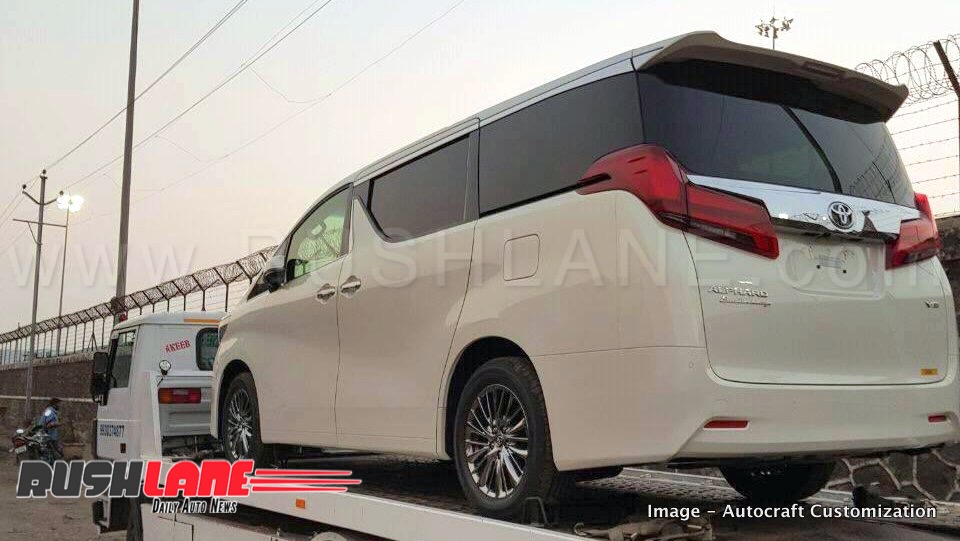 After turning heads with its unique, muscular design at Auto Expo 2018, it’s left to be seen when and if at all, Toyota Alphard Luxury MPV will be launched in India. There’s quite a huge demand for such vehicles in travel & tourism industry, and often times, HiAce is just as popular.

Toyota Alphard primarily caters to fleet and luxury tour operators, even though it may also appeal to families that travel frequently and are looking for more luxury, safety and comfort.

Alphard’s unique design is a love it or hate it discussion, receiving both praise and criticism. It’s largely curve-less, box-like design gives it a muscular, almost beast-like character. Front section features a huge chrome grille, which has an uncanny resemblance to Wolverine’s quintessential jaw. Front grille also looks similar to a snowplough or front section of a diesel locomotive. The front fascia is complete with a large central air intake, prominent headlamps with projector units, fog lamps, and LED DRLs.

Notwithstanding its beefy profile, Alphard’s real value is in its superior luxury and comfort. It has rear sliding doors, which provide maximum convenience for ingress and egress.

Alphard is more spacious and luxurious in comparison to Innova Crysta. In international markets, Alphard is available in petrol and hybrid variants. A petrol variant with 2.5 litre four cylinder petrol engine delivers 179 bhp power and 235 Nm torque. Another variant with a 3.5 litre V6 engine delivers 297 bhp power and 361 Nm torque. Engines are mated to an 8-speed automatic or CVT transmission for petrol variants, and a CVT powertrain for hybrid version. If launched in India, it will come via the CBU route. Expect price in the range of Rs 50-60 lakhs.