Japanese automaker Toyota Motor has launched its all-new Corolla Cross compact crossover in Thailand. Though no announcements have been made about its launch in India, one cannot entirely rule out the possibility; especially considering the fact that compact crossovers/SUVs are some of the most preferred choices in our market. Ex-showroom prices of the Thai-spec Toyota Corolla Cross start at THB 989,000 (INR 23.80 lakh) and go up to THB 1,119,000 (INR 28.86 lakh).

The 2021 Corolla Cross is based on TNGA-C platform and is positioned between the CH-R and RAV4. TNGA expands to Toyota New Global Architecture while ‘C’ denotes the crossover’s compact design. Wheelbase remains identical to the Toyota C-HR, at 2,640mm. Length, width and height of the Toyota Corolla Cross stand at 4,460mm, 1,825mm and 1,620mm, respectively. The crossover rides 161mm up from the ground. 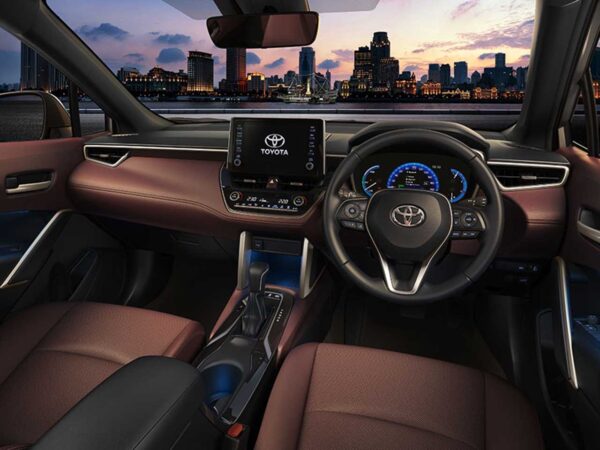 The Thai-spec Toyota Corolla Cross comes with two four-cylinder NA petrol engine options: 140ps/177Nm 1.8-litre and 1.8-litre ‘THS II’ hybrid. The hybrid unit combines the regular 1.8-litre motor (tuned to produce 98ps and 142Nm) with an electric motor rated at 72ps (53kW) and 163Nm. Put together, the Corolla Cross hybrid variant churns out roughly 122ps. In both cases, power is sent to the front axle via a CVT (different unit in each case).

Ahead of BS6 emission norms, the Toyota Corolla was discontinued in India. Meanwhile, Toyota Kirloskar Motor is readying the Urban Cruiser for India — a subcompact crossover based on Maruti Suzuki’s Vitara Brezza.