Toyota Kirloskar Motor is getting ready to launch the facelifted 2021MY (global market) version of its popular mid-size SUV, Fortuner. The upcoming Toyota Fortuner avatar was spotted a few times on Indian roads whilst doing the usual pre-launch ARAI emission tests. There is no major improvement in terms of cosmetics but the diesel power plant is expected to receive a significant bump in output.

The 2021MY Toyota Fortuner has already debuted in foreign markets, starting with Thailand. In the Thai market, the SUV is available in two formats: Fortuner (minor facelift) and Fortuner Legender (major facelift). At the moment, it is unsure whether the Legender would arrive in India. The current BS6 model comes at a starting price of Rs 28.66 lakh ex-showroom for the 4×2 MT petrol variant.

One could argue that the Toyota Fortuner is a bit outdated compared to its primary rival from Ford India, Endeavour. Yet monthly sales figures tell a different story. While Mahindra’s Alturas G4 is another worthy competitor, MG Motor India plans to join the party (most likely at a higher price point) with its all-new ‘full-size SUV’, Gloster a.k.a. India-spec Maxus D90. Even after the 2021MY update, the Fortuner might lag behind its key rivals or alternatives in ‘freshness’. 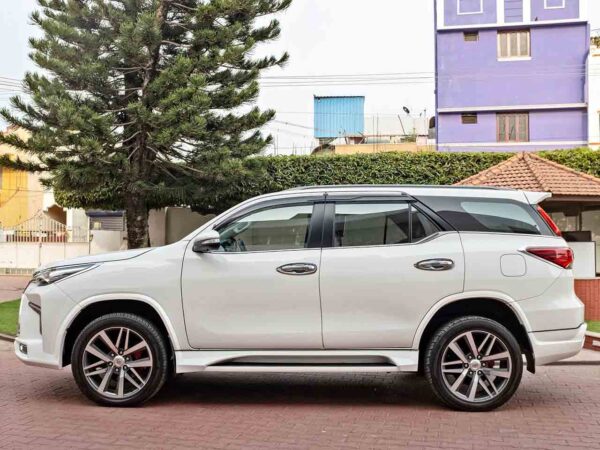 There is an interesting option to get the outgoing model’s aesthetics enhanced, even though this might not align with everyone’s taste in automobiles. Coimbatore-based KitUp Automotive has introduced a custom bodykit that gives a Lexus LX-like front fascia to the SUV. The example you see here is a 2017MY Fortuner.

The trend of transforming premium Toyota products to extra-premium Lexus models has been around for quite a long time. Perhaps the most popular example is the conversion of Toyota’s ‘J100’ Land Cruiser to its Lexus equivalent (second-gen LX). Since both vehicles are essentially the same underneath, this was not a dealbreaker.

KitUp Automotive’s Fortuner-Lexus conversion is quite decent considering the fact that there is no abnormal shift in dimensions. Furthermore, the front bumper and spindle grille are the only obvious ‘Lexus’ elements on the entire vehicle. Another highlight is its 20-inch wheels sporting an identical design as the OEM 18-inchers.