Japanese automakers Suzuki and Toyota announced a partnership last year on a global level to exchange products and technologies. The first fruit of this joint exercise will be seen in the Indian market where Toyota Kirloskar Motor (TKM) will rebadge and sell four of Maruti Suzuki’s segment leading products. The products in question are the Maruti Baleno, Ertiga, Ciaz and Vitara Brezza.

A few days ago, we reported that the Toyota’s version of Baleno is ready to hit the showrooms towards the end of this month, and now we have learnt that the car in question will be called as Glanza. According to our sources, production of the Toyota Glanza hatchback has commenced at Suzuki Motor’s new Gujarat plant. The plant which is set up by Suzuki Motor Corporation to manufacture and sell cars to its Indian subsidiary Maruti Suzuki will also sell Toyota badged Baleno to TKM initially.

We have also learnt that production of Toyota Blanza would be shifted to one of TKM’s two plants in Bidadi, near Bangalore, once the automaker sorts out component sourcing. Such a move would not only improve Toyota’s capacity utilization but also would free up production capacity at Suzuki Motor’s Gujarat plant so that it can cater to Maruti’s high demand. 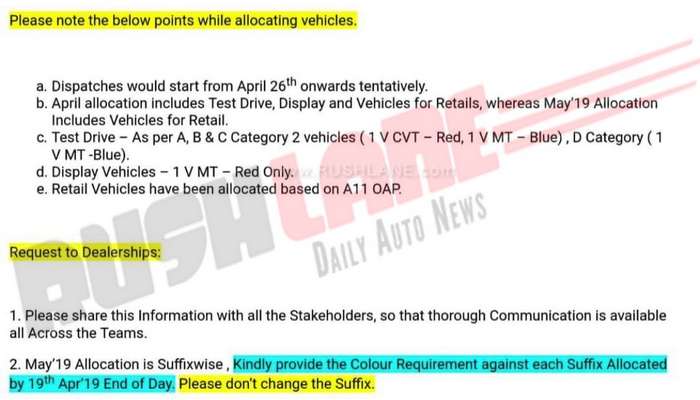 Coming back to the Toyota Glanza, it will be available in Zeta and Alpha trim levels (names of the variants could be different) with the 1.2-liter K12B as the sole engine option. Like in the Baleno, the petrol motor will be mated to either to a 5-speed manual gearbox or a CVT. The engine produces 83 PS and 115 Nm of torque. The engine will be BS6 compliant.

It is to be noted that the Maruti Baleno has just received the 1.2-liter DualJet (K12C) engine update along with Smart Hybrid (SHVS) system. It remains to be seen when will this update seen on the Toyota Glanza. As far as features are concerned, both Toyota and Maruti versions will be identical.

Visually, the Toyota Glanza will feature revised front grille and bumper to have a Toyota brand identity. The sheet metal parts and interior will be carried forward without any change. The premium hatchback will be pitted against its donor car, Hyundai Elite i20, Honda Jazz. The rebadging exercise would allow Toyota to establish its presence in volume rich segments in India. Price of Toyota Glanza will be higher than respective variants of Maruti Baleno.