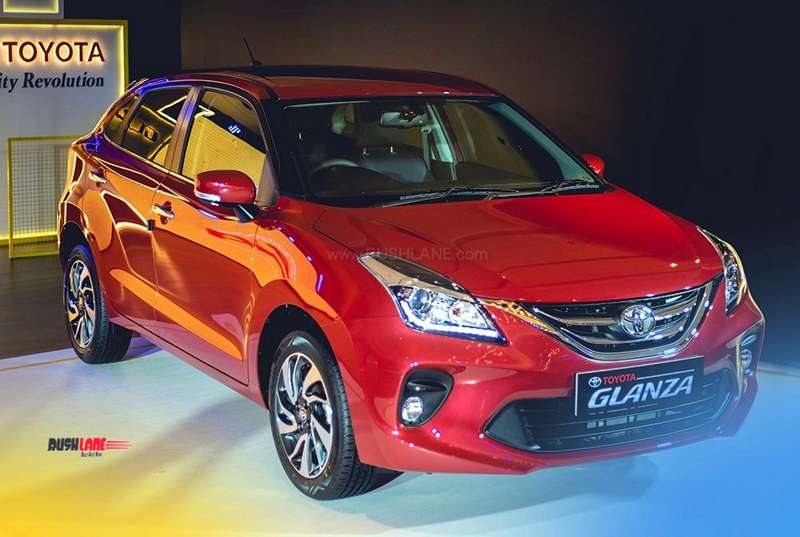 Even though it is essentially a rebadged version of Maruti Baleno, Toyota claims that the Glanza offers a much better experience, including improved performance and safety. And on top of all that, it is priced cheaper than Maruti Baleno. Toyota has not revealed how are they managing to sell Glanza cheaper than the Maruti Baleno, but it is probably the case of taking home lesser profits in order to attract buyers to Toyota, instead of Maruti.

As compared to Maruti Baleno, there aren’t many exterior changes on Toyota Glanza. Only a few exceptions count such as redesigned grille and addition of Toyota badging. However, this does not limit the car’s ability to be positioned as standalone product that offers better experience than Baleno. Insides of the two hatchbacks are identical with the exception of few items such as Toyota badging on the steering wheel. 7-inch touchscreen infotainment system on-board Glanza are similar to that of Baleno.

Both Baleno and Glanza share the same platform and there are no structural differences. Both cars are produced in the same plant and in the same production line (Suzuki plant in Gujarat). However, Glanza promises to deliver superior experience to users with Toyota’s superior sales and service experience.

Toyota is not offering the Glanza in base trim, it is only offering in mid and top trim. This when compared to corresponding variants of Maruti Baleno, Glanza is priced considerably lower than the Baleno, especially the G MT trim, which is powered by SHVS equipped engine. Toyota G trim is basically Maruti Baleno’s Zeta trim, while the V trims is Baleno Alpha trim. All prices above are ex-sh.

Toyota Glanza is offered with with the K12B 1.2 litre petrol engine that makes 82 hp @ 6,000 rpm and 113 Nm torque at 4,200 rpm. This engine is already available with 2019 Baleno. It is mated to a 5-speed MT or a CVT unit. Glanza is also offered with the K12C 1.2 litre DualJet engine. This engine comes integrated with a smart hybrid system and delivers 90 PS and 113 Nm. The SHVS option is only on offer with the mid trim G, and only with MT option. Both engines are BS6 compliant. Diesel option is not expected to be offered for Glanza.

Improved warranty terms will be another differentiating factor for Glanza. As compared to Baleno that comes with 2 year/40K km warranty, Toyota Glanza will offer 3 year/1 lakh km warranty. Additional warranty packs are also be available for Glanza, such as 5-year True Warranty package and a 7-year Toyota Timeless Warranty package. These extended warranties will be chargeable to customers.

All these points does make the Glanza look better than the Baleno. But is a Toyota customer prepared to buy a Maruti, or a Maruti customer ready to buy a Toyota? Sales reports over the next few months will reveal the answer.