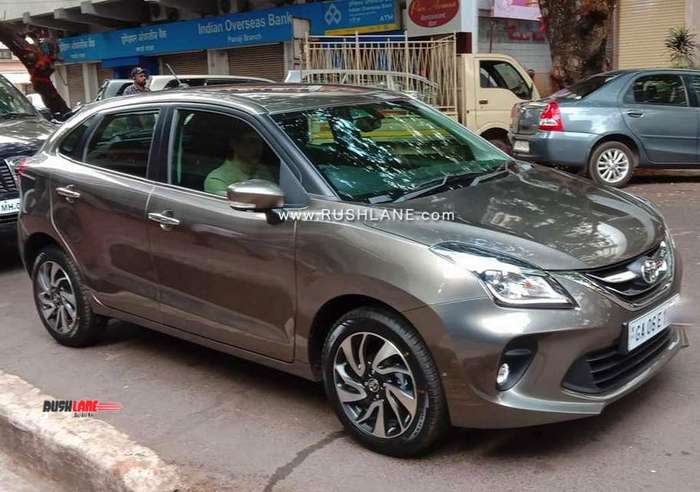 New Toyota Glanza is the rebadged Maruti Suzuki Baleno. Slated for launch in early June 2019, the car has now been spotted in Goa, during TVC shoot. The Glanza is being produced at the Suzuki Plant in Gujarat and supplied to Toyota Kirloskar Motors as a part of the Suzuki Toyota alliance.

The new Toyota Glanza premium hatchback top spec V trim has been detailed the images and video from spy shoot. Seen as identical to the Maruti Suzuki Baleno both where its exterior design and interior makeup is concerned. The Glanza in two high specs of G and V trims are the equivalent of the Baleno Zeta and Alpha variants.

Identical exteriors show off the same bumper, grille and alloy wheels, with the only differentiating factor being the Toyota logo that sets the Baleno and Glanza apart. The interiors of Glanza also sport same dashboard design, color scheme and steering wheel as seen on the Maruti Suzuki Baleno. It is also the positioning of the touchscreen infotainment system in the center that is identical to that seen on the Baleno. However, it is yet to be confirmed if it will sport SmartPlay UI as seen on the Baleno or not.

Engine specifications are also expected to be the same as those seen on the Baleno. These include the 1.2 liter petrol BS6 motor and the newly launched 1.2 liter DualJet VVT engine with SHVS. The former is rated at 83 PS and 114 Nm. Latter option gets an SHVS mild hybrid system. It produces around 90 bhp power and 120 Nm torque mated to a 5 speed manual transmission. There will be no diesel engine on offer with the Glanza. CVT option will be on offer with petrol 1.2 variant.

Though identical to the Baleno in all respects, Toyota will be positioning the Glanza as a premium offering in the B2 segment. It will be offered with 3 years and 1,00,000 km warranty as compared to the Maruti Baleno which comes in with 2 years and 40,000 km warranty. Toyota could also offer an extended warranty of 5 years True Warranty package for within the period of standard warranty and 7 years Toyota Timeless Warranty pack which can be availed off after the standard warranty is over.

Where pricing is concerned, Toyota could price the Glanza at a premium over the Baleno. Bookings have opened ahead of launch and likely prices could be between Rs 7.5 lakhs and Rs 9 lakhs, ex-sh.