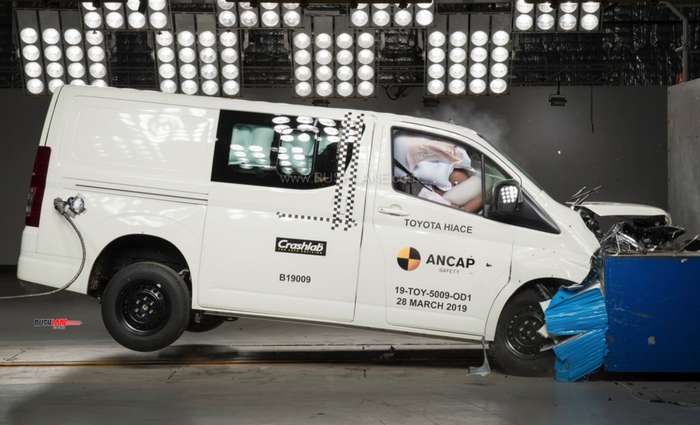 The all new Toyota HiAce has scored 5 stars in the latest round of ANCAP tests. The tested model was introduced in Australia and New Zealand in May 2019. The tests were carried out on all van – 2 seat and crew van – 5 seat variants built from February 2019. The tests revealed some impressive scores.

Where adult protection was concerned, the passenger compartment remained stable in the case of frontal offset tests. Protection to driver and co passenger’s chest area was termed as ‘marginal’ while protection for drivers lower legs received an ‘Adequate’ score. 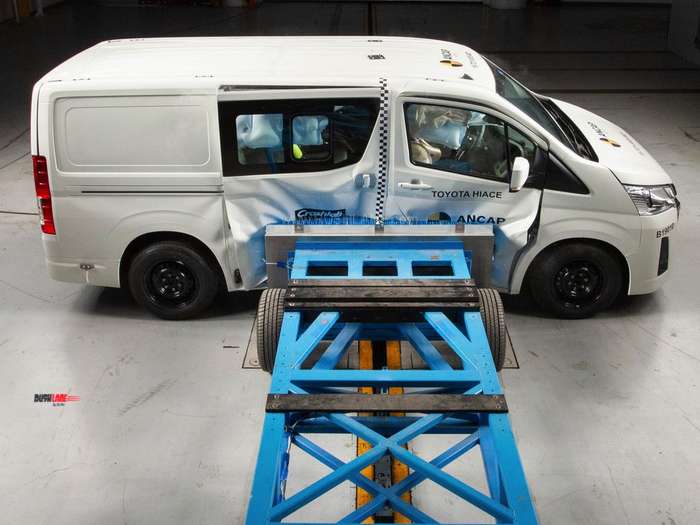 In the area of child protection conducted on dummies of 6-10 years, scores were ‘Good’ or ‘Adequate’ for all critical body regions. On side impact tests, scores were ‘Good’. These tests were conducted on the 5 seater Toyota HiAce crew van as it is fitted with lower ISOFIX anchorages on the rear seats and top tethering for all rear seats. The Toyota HiAce 2 seater van is not suited for use by children as there is no top tethering available.

Toyota HiAce scored ‘Good’ or ‘Average’ in terms of road user protection. The bonnet of the HiAce offers adequate protection to the head of a pedestrian. The bumper scored well for protection to pedestrian’s legs while ‘Good’ scores were received in all test locations such as protection to the pelvis etc. Autonomous Emergency Braking system was capable of detecting both pedestrians and cyclists on the road both on daylight and low light. Full crash test report below.

Toyota HiAce 10 seater MPV was showcased in India at the Auto Expo. It has also been spied on test on Indian roads last year. It is expected to be launched in India later this year, as a CBU. Prices are estimated to be in the Rs 50 lakh range.