Toyota has launched a new variant of the Innova Crysta in India. Called the G Plus, the variant is positioned below the GX variant and is offered to both private and fleet buyers in the country. It is the new entry level variant of Innova Crysta line-up, making the entry price cheaper by Rs 38,000, as compared to before. Toyota Innova Crysta G Plus is presented in two variants at Rs 15.57 lakhs for the seven seat version, while the eight seat variant is priced at Rs 15.62 lakhs.

Toyota Innova Crysta G Plus is offered in color options of Avant-Garde Bronze, Silver, Grey and Super White. It will be seen with new halogen headlamps as against LED lights seen on the other variants while it will get 16” alloy wheels with 205/65 section tyres as against 17” units seen on the top end variant.

The G Plus variant also misses out on a music system, rear defogger and central arm rest where its middle row seating is concerned. Interiors will sport features such as air conditioning and fabric upholstery along with safety features such as power steering, power windows, front airbags, rear parking sensors and seat belt reminder along with ABS and EBD.

Toyota Innova Crysta G Plus variant will be powered exclusively by a diesel engine. This 2.4 liter common rail engine offers 150 PS power at 3,400 rpm and 343 Nm torque at 1,400-2,800 rpm mated to a 5 speed manual gearbox and does not receive any automatic option. The engine returns fuel efficiency of 15.1 kmpl. 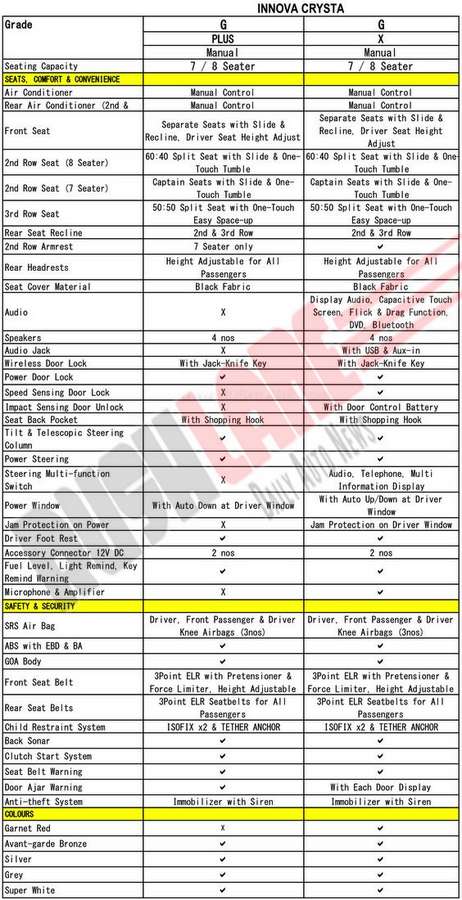 Toyota Innova Crysta is now offered in variants of G Plus, GX, VX and ZX. There is also the range topping Touring Sport version. Bookings have opened for the new Innova Crysta G Plus variant, which the company states is a made to order variant. The new G Plus variant will help the company increase sales of the MPV. However with the new Mahindra Marazzo will be a strong contender especially since it is priced a lot cheaper.

Toyota Innova Crysta has been receiving good attention where sales are concerned. Sales have been averaging at 6,500 units a month, making it the best selling Toyota in India. Speaking about overall sales, in February 2019, a total of 11,760 units were sold in domestic markets while 737 units of the Etios were exported taking total sales upto 12,497 units. This was lower than total sales of 12,687 units in February 2018.