It was only recently that Maruti Suzuki shared a formal report stating its approval for Toyota’s plans to launch a subcompact crossover based on the Vitara Brezza. Expected to launch sometime later this year or at the start of 2021, Toyota’s upcoming product would most likely bear the name, Urban Cruiser. Toyota recently filed a trademark application for ‘Urban Cruiser’.

Once launched, this new Toyota Maruti Brezza SUV will be the second Toyota product to come under the Japanese brand’s joint venture with Maruti Suzuki. The first product, Glanza hatchback (based on Maruti Suzuki’s Baleno) is currently the most affordable product in Toyota Kirloskar Motor’s (or Toyota India’s) portfolio. The company had discontinued its Etios range ahead of BS6 emission norms.

Several rumours are floating about the upcoming Toyota Urban Cruiser. While one still cannot be certain that the ‘Toyota Brezza’ would carry such a nametag, various sources claim that it will be aesthetically more in line with Toyota’s global portfolio — unlike the Toyota Glanza which is a direct badge-job. 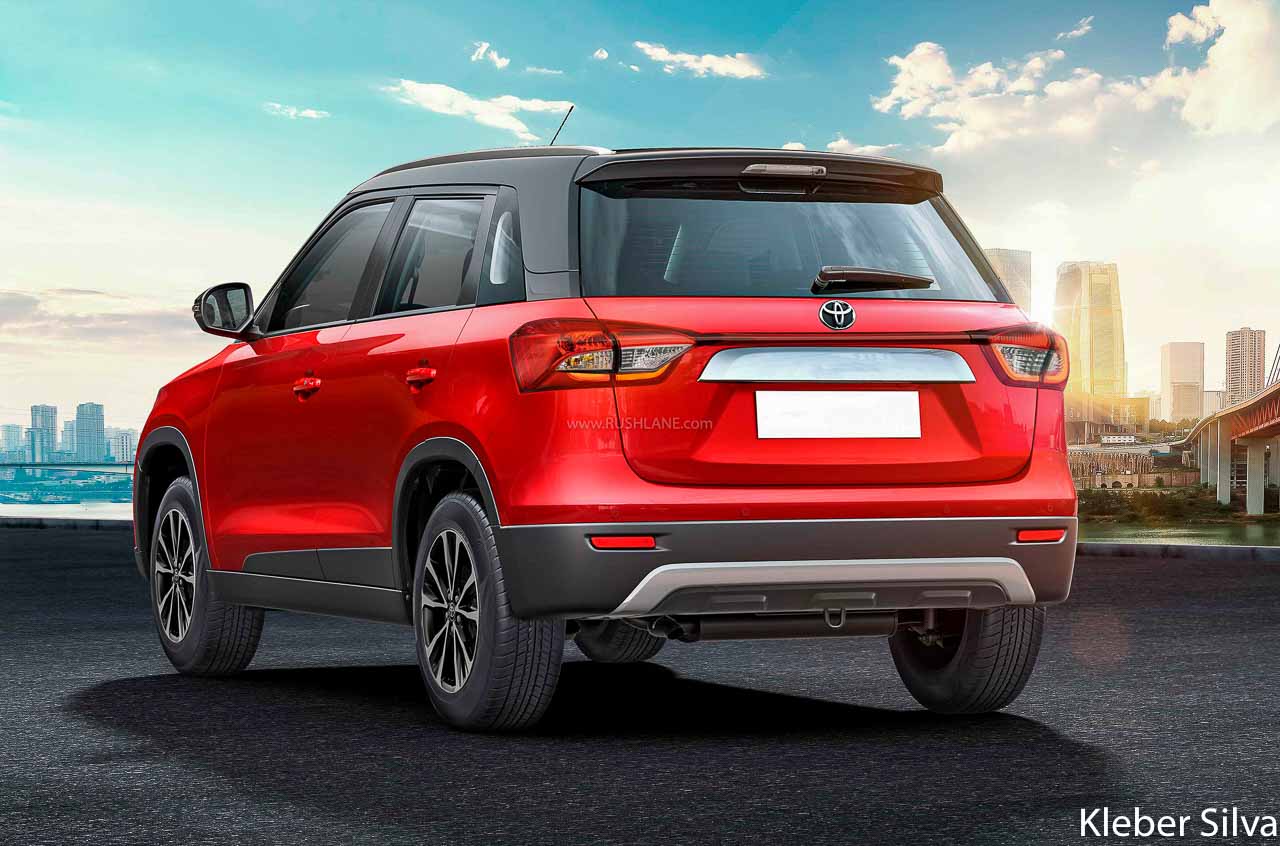 Kleber Silva, a digital artist from São Paulo, Brazil has shared an imaginative Toyota Urban Cruiser render. Based on the pre-facelift Vitara Brezza, Kleber’s work is a convincing insight into how Toyota’s new product would arrive for the 2021 model year (in dual-tone format). Over the months, we have posted several renders by Kleber Silva including a sub-four-metre or subcompact Jeep Renegade.

Compared to a standard pre-2020MY Maruti Suzuki Vitara Brezza, Kleber has not done a major revision. However, he has identified some key areas (such as headlamps, grille, wheels, etc.) and made a Toyota twist. The headlamps are full-LED units and like in modern Toyota products, the intercooler grille (or just ‘bumper grille’ in NA vehicles) doubles as a radiator grille. Its wheels were borrowed from a US-spec 2019MY Toyota Corolla sedan.

Coming to the rear, Kleber has opted the facelifted 2020MY Vitara Brezza as the base. The bumper was left untouched (with the out-of-place tow hook still sticking out) while the tail lamp assembly received some tweaks to match with Toyota’s present-day global line-up. Either unit is connected by what seems to be a reflector strip. Changes are minimal but a much more respectable job than in the Toyota Glanza’s case.

Powering the new Toyota Maruti Brezza SUV would be the same 1.5-litre K15B NA four-cylinder BS6 petrol engine. It makes around 103bhp and 138Nm of torque. The engine would be mated to a 5-speed manual or a 4-speed TC automatic transmission.