Just a few days after the world premiere of Daihatsu Rocky sub-4m SUV at the ongoing Tokyo Motor Show, pictures of its Toyota sibling have leaked online. Slated to make its first public appearance early next week, the Toyota Raize will be marketed as an entry level SUV is select markets (mostly in the Asian region).

Toyota did more than just replace the Daihatsu badges on the Rocky. Though both compact crossovers share most of the sheetmetal parts, they have sufficiently different visual appeals.

The Raize subscribes to the Japanese automaker’s global design language with a trapezoidal grille and wraparound LED headlights. The front fascia also features two lighting elements in the foglight enclosure including DRLs. 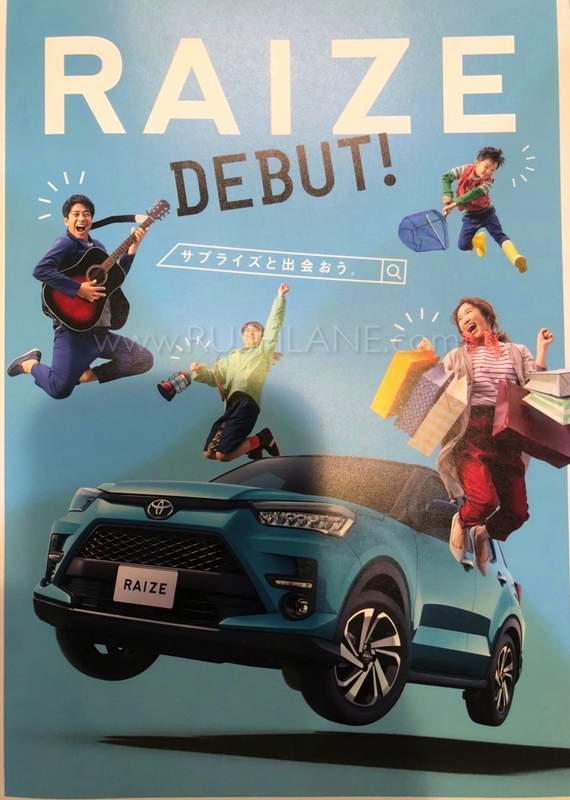 In profile, Daihatsu Rocky and Toyota Raize look pretty much identical down to the forward leaning C-pillar and contrast roof. The Raize differentiates itself from is sibling by means of stylish 17-inch dual-tone alloy wheels. Images of the rear fascia are not available as of now but we expect the differences to be minimal.

The Toyota Raize’s interior is reported to be identical to that of the Rocky save for the logo on the steering wheel. This would mean, the crossover will carry over the stand-alone touchscreen infotainment system, a chunky steering wheel and a driver-focused center console.

It is possible that both Daihatsu Rocky and Toyota Raize are sold together in select markets. Toyota would be positioning its compact SUV above its Daihatsu counterpart by having additional features on board.

Underpinned by the modular DNGA platform, a cost effective derivative of Toyota’s TNGA architecture, the Toyota Raize is expected to weigh under a ton (the Rocky’s kerb weight stands at 980 kg). Both models will share the 1.0-litre three-cylinder turbocharged petrol motor which is tuned to deliver 98 hp and 140 Nm of torque. As of now, the motor is available only with a CVT but it is reported to have a 6-speed manual option down the line.

While the sub-4m dimension makes is well suited for our market, we think Toyota would rather prefer rebadging the Vitara Brezza for India. That said, Toyota has not made any official comments about the prospect of Raize in India yet. If launched, it will rival the likes of Maruti Brezza, Ford EcoSport, Mahindra XUV300, Tata Nexon, Hyundai Venue and soon to be launched Kia QYi.