Maruti Baleno Rebadged Glanza to be exported by Toyota as Starlet

The product and technology sharing agreement between Suzuki and Toyota which saw fruition first in India is now ready to extend to the African continent as well. The Toyota Starlet, the export specific version of the Glanza which in turn is the rebadged Maruti Baleno, has been spotted at a stockyard.

Destined for African markets, the Toyota Starlet is being made at Suzuki’s wholly owned Gujarat production facility which also makes India-spec Glanza. To recap, the agreement between Toyota and Suzuki aims at exploring synergies in terms of products, platforms and powertrain technology. While Toyota receives rebadged vehicles from its partner for select markets including India, Suzuki will have access to the auto giant’s world renounced hybrid powertrain technology. Not to mention, a better capacity utilization of its plants.

Starlet is not a new name for Toyota. The Japanese brand had a car with the same name for many years. In fact, in some markets where the Starlet brandname existed, Toyota will be promoting the rebadged Baleno / Glanza as the 5th generation Starlet. 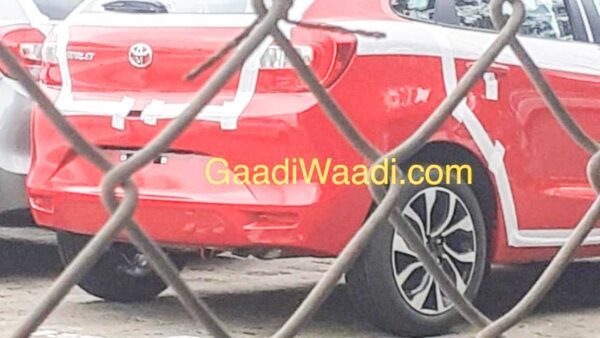 Speaking about the Starlet in spy images here, though the front is not visible in the spyshots, it is expected to be identical to that of the India-spec Glanza. The only noticeable difference between the two rebadged Toyota hatchbacks is the alloy wheel pattern. The export-spec version sports different dual-tone units.

The Starlet is most likely to be powered by the same 1.2-liter K-series petrol engine that also caters to the Glanza and Baleno. The naturally aspirated petrol engine produces 83 hp and 113 Nm of torque in lower manual variants, and CVT automatic variants. The top-end manual variant employs Integrated Starter Generator (ISG) and offers 89.7 hp while torque output remains at 113 Nm.

With Toyota Starlet, the company is aiming to achieve in Africa what it has been managing with the Glanza in India – to generate incremental sales. Launched in 2019, the Toyota Glanza quickly rose to become the third best-selling hatchback in its segment, next only to the Baleno and Hyundai i20. Having an affordable hatchback on sale in Africa without incurring heavy investment costs sounds like a profitable undertaking.

Toyota has already started accepting bookings for the Urban Cruiser, the rebadged Maruti Vitara Brezza, in India. The SUV is slated to go on sale next month. Once the production for the domestic market is optimized, the compact crossover could follow the Starlet into Africa. Toyota is also working on rebadged versions of the Ertiga compact MPV and Ciaz sedan. We will see the first Suzuki with Toyota powertrain technology in due course.