Images of Toyota Urban Cruiser’s exterior and interior in addition to key product details have been leaked ahead of the compact crossover’s debut on August 22. While it is essentially a rebadged version of the Maruti Vitara Brezza, this time around, Toyota Kirloskar Motor (TKM) has made some effort to visually distinguish it from the donor car.

As expected, the sheet metal part of the exterior has been carried forward from the Vitara Brezza without any significant changes. While the Glanza hatchback (rebadged Baleno) only received additional chrome strips on the grille and Toyota badges, the Urban Cruiser sports a completely redesigned front end.

For starters, the larger two-slat grille with chrome borders retune the styling to match Toyota’s SUV design language. The designers chose to retain the headlamps. Detailing is also same with dual chamber LED projector units and dual-function LED DRLs which also double up as turn indicators. The front bumper is much bolder than the Brezza’s unit and houses chrome finished foglamp housings (foglamps are also LED units) and a grey scuff plate. 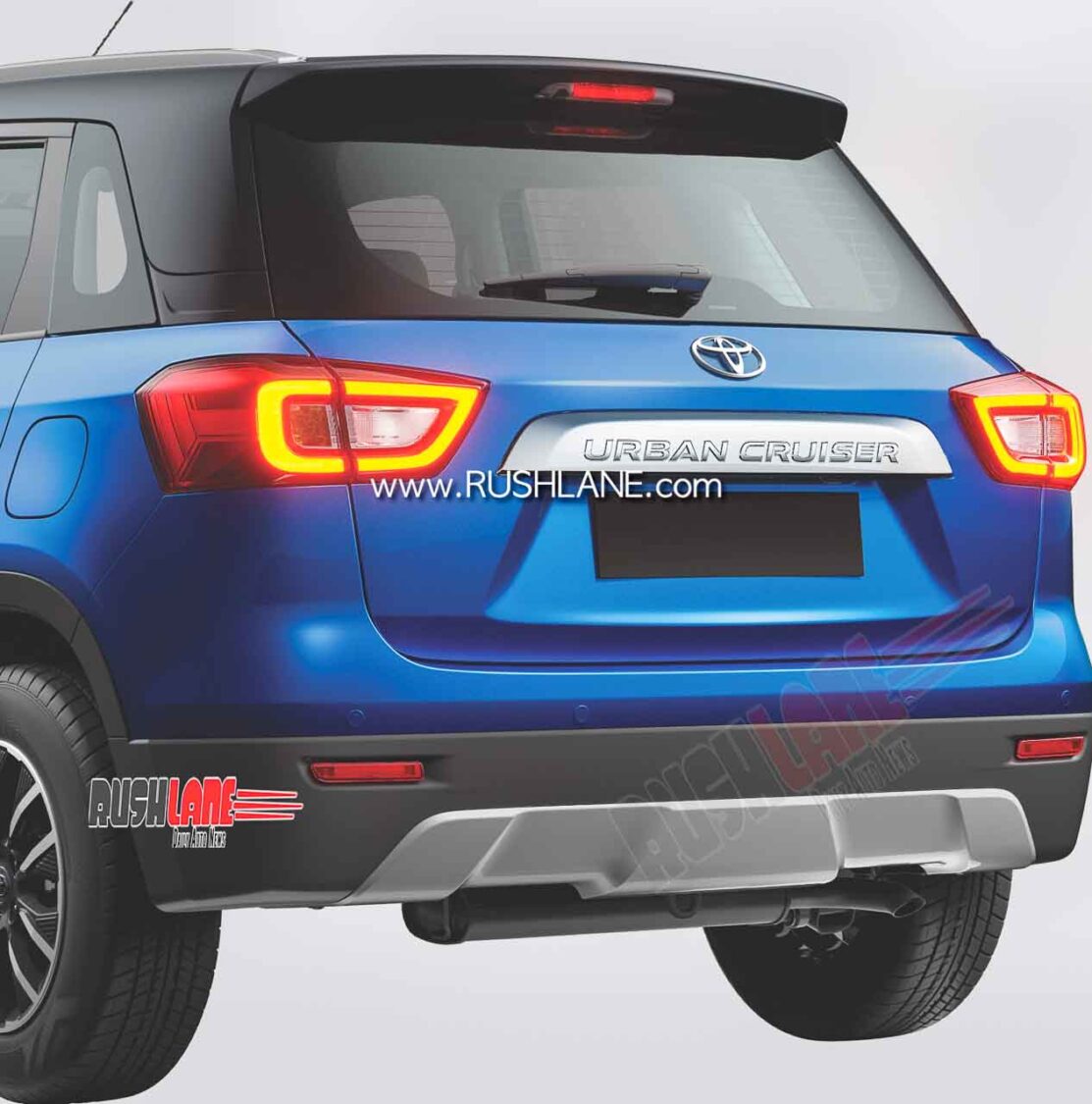 Changes in profile come in the form of a fresh 16-inch Toyota-branded diamond-cut alloy wheels. The rear fascia features the same LED detailing for the split taillights as the recently updated Brezza. In a nutshell, though the Toyota Urban Cruiser’s roots are very obvious, it manages to emerge as a bolder and sportier counterpart. 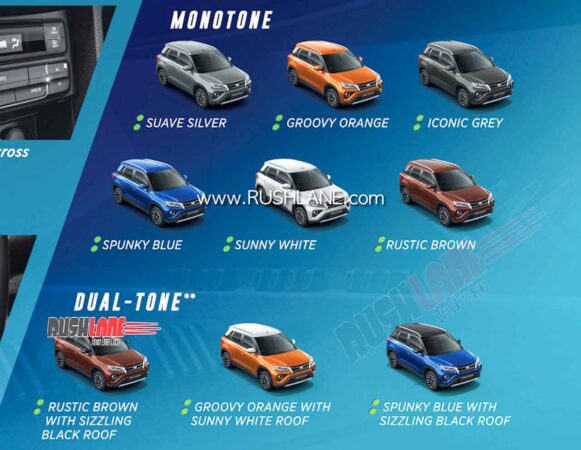 The Toyota Urban Cruiser shares its interior design with its Maruti sibling with the only change coming from the Toyota logo on the steering boss and new black and brown dual-tone colour theme. Toyota will be positioning the Urban Cruiser at a slight premium compared to the donor model but it will backup it up by offering more standard features. For example, the automatic climate control system is standard across all variants of the new Toyota compact crossover. 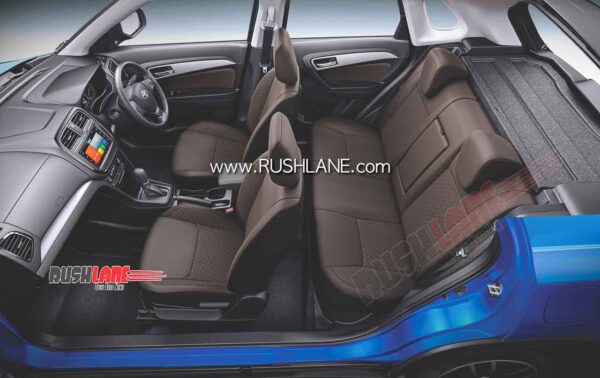 Other interior highlights include a Smart Playcast touchscreen infotainment system with Android Auto, Apple CarPlay and smartphone enabled navigation system. As far as dimensions and interior rooms are concerned, the Toyota Urban Cruiser is identical to the Maruti Vitara Brezza. 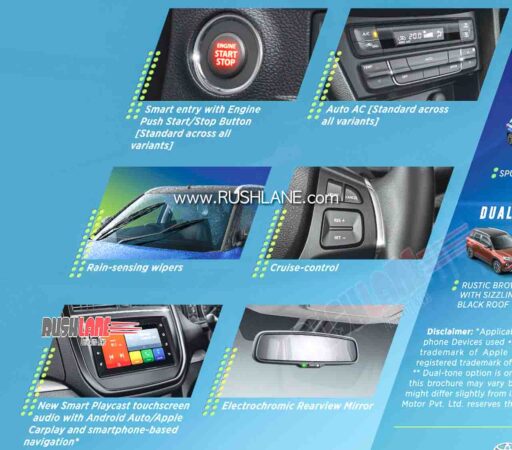 Details about trim levels and variant wise features are still under wraps but the high-end variant will be available with multi-function steering wheel, automatic rain sensing wipers, cruise control, electrochromic internal rear view mirror, and so on. Given the the original crossover achieved 4-star rating in Global-NCAP crash tests, we expect the Toyota version to inherit the safety rating.

Needless to say, the Toyota Urban Cruiser will also borrow its engine from the Vitara Brezza which ditched its diesel engine in favour of a petrol engine for the BS6 era. The 1.5-liter K-Series Suzuki engine will be available with both 5-speed manual and a 4-speed automatic transmission. 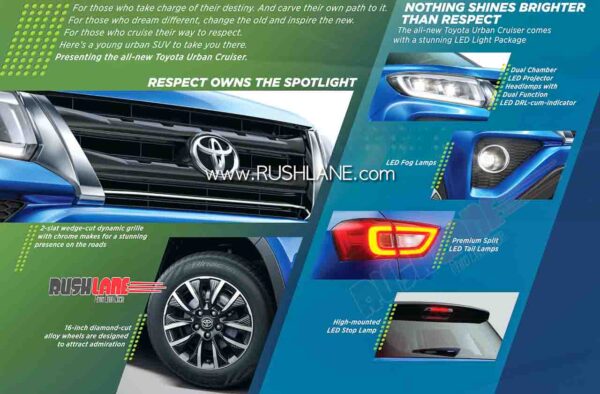 The brochure does not specify the power and torque outputs but we don’t expect it to be different from the Brezza’s 105 hp and 138 Nm of torque. The Brezza returns an ARAI certified fuel economy of 17.03 kpl in manual avatar and 18.76 kpl in automatic avatar. The AT variants benefit from mild hybrid system with Integrated Start Generator. It remains to be seen if the Toyota version will offer the mild hybrid system as a standard feature or only with the automatic transmission.

The Toyota Urban Cruiser is entering a highly competitive sub-4m compact crossover segment which was dominated by its sibling until recently. The latest entrant will have to pickup up a fight with the Hyundai Venue, Tata Nexon, Mahindra XUV300, Ford EcoSport and recently unveiled Kia Sonet. In not so distance future, the segment will also be joined by Nissan Magnite and its Renault counterpart, the Kiger.

The Urban Cruiser is expected to be manufactured by Maruti Suzuki alongside the Brezza. Just like the Glanza, the primary objective of the new model is to expand TKM’s presence in the Indian automotive market and bring incremental sales. The partnership between the two Japanese automakers will also see a similar rebadging exercise involving the Ertiga MPV and Ciaz sedan.

It would be interesting to see how the latest petrol-only compact SUV stacks up against its established rivals. Bookings open on August 22, while launch is expected in Sep 2020.