Toyota has gone all out aggressive in order to promote its upcoming subcompact SUV- the Urban Cruiser which is slated to be launched later this month. Ahead of launch, the first this is the first time Toyota Urban Cruiser has been spotted on the road, while it was out for a TVC shoot.

The company has already started accepting pre-bookings through its official website and dealerships across the country since August 22. The booking amount has been kept at Rs 11,000. To attract its potential buyers, Toyota Kirloskar Motors (TKM) has announced the introduction of a special ‘Respect Package’ exclusively for people who have pre-booked their Urban Cruiser. Under this package, customers will be entitled to no-cost periodic maintenance for a period of up to 2 years or 20,000 km, whichever is earlier.

The Urban Cruiser is a rebadged version of Maruti Suzuki Vitara Brezza. It is the second model to be inducted to Toyota’s portfolio after Baleno was rebadged as Glanza last year as per the deal inked between Toyota and Suzuki to share models between them. The Urban Cruiser will be offered in three variants- Mid, High and Premium.

Differences between Urban Cruiser and Brezza

Unlike the Glanza which is every bit a Maruti Baleno except for the Toyota badging, we expect the Urban Cruiser to feature some distinguishing elements. For instance, the fog lamp cluster and front bumper have been redesigned. In addition, the two-slat grille from the bigger Fortuner has been adopted in this compact SUV.

The Urban Cruiser is still essentially a Vitara Brezza with the same interior layouts and features. The equipment list consists of a 7.0-inch SmartPlay touchscreen infotainment system with Android Auto and Apple CarPlay, automatic climate control, push start/stop button, cruise control, rain-sensing wipers and much more. However, the upholstery will be of a lighter shade than the all-black scheme of Vitara Brezza. 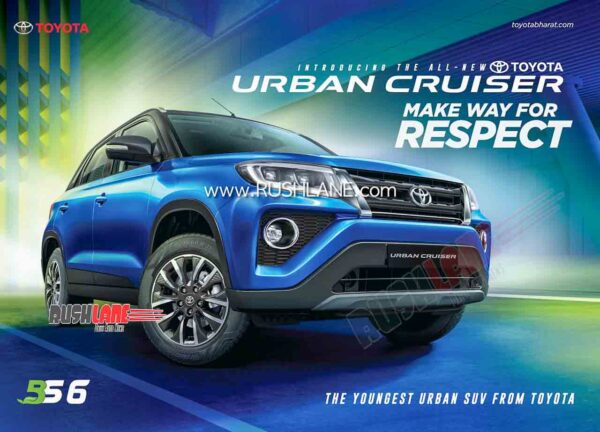 At the exterior it gets LED projector headlamps, dual function LED DRLs and indicators, LED fog lamp and a split tail lamp. It also gets 16-inch dual-tone alloy wheels which are slightly different from Vitara Brezza. There are a total of nine colour schemes available to choose from- six mono-tone and three dual options.

Toyota Urban Cruiser will be fitted with the same 1.5-litre K-series petrol engine offered in Vitara Brezza which generates 104 bhp and 138 Nm of peak torque. Power will be transferred to the front wheels via 5-speed manual transmission or a 4-speed torque converter automatic.

The Urban Cruiser will be positioned in the sub-4 metre SUV segment and will face competition from the likes of Hyundai Venue, Tata Nexon, Ford EcoSport, Mahindra XUV300 and its Maruti Suzuki sibling- Vitara Brezza. Prices will be revealed at the time of launch but we can expect TKM to price it competitively between Rs 8-11 lakh (ex-showroom).