After trying every other means to stop the use of loud and ear shattering after market exhausts, the police have now come up with something new and probably fool proof. The police men attached to the Bhayander Police Station of Maharashtra Police have started disguising themselves as beggars, saints and ordinary people to trap the offenders.

The police, under the garb of such common men are taking on traffic offenders, reigning blows on the aftermarket exhausts and destroying them on the spot. The accompanying video shows off such tactics being followed by the Mumbai Police to bring law breakers to book. 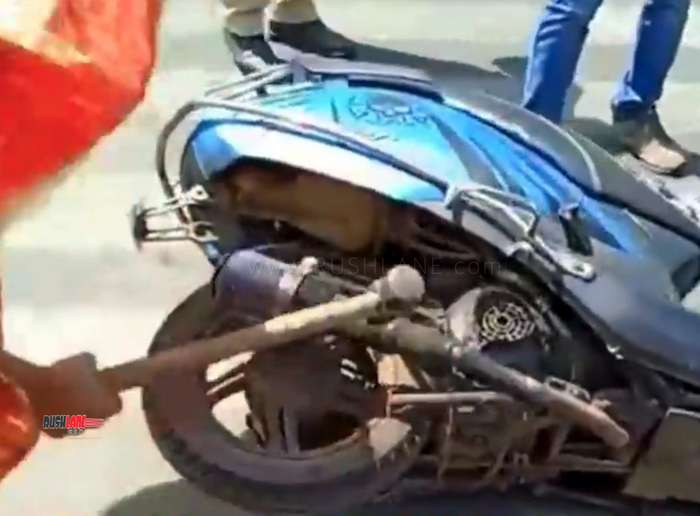 These aftermarket exhausts have become a noisy nuisance and bikers revel in its use despite it being banned by the court of law. There are numerous two wheeler riders in India who not only cause noise pollution but also blatantly flout traffic rules by racing down crowded areas, putting life and limb at risk and are dangerous for other road users.

These riders often spot the police from a distance and skirt the area making it difficult for the cops to stop them. The only way is under disguise so as to blend into the crowd and jump up and nab the culprits at traffic signals.

The video shows how these rash two wheeler riders go past the traffic cops on duty and do not even bother stop when flagged down. The disguised cops then stop the riders, remove the keys, place the scooter on the ground and then use a hammer to completely destroy the aftermarket exhaust. It is only after multiple blows from the hammer and the complete destruction of the silencer that the cops stop. This drastic system has to be resorted to as rough riders are immune to numerous challans and fines, warnings and confiscation of licenses. This strong lesson is a last ditch effort to get them to obey traffic rules and to ensure that such illegal exhausts are not used again in future.

To date around 50-55 two wheelers with aftermarket exhausts have been destroyed by the cops. These exhausts emit sounds that are way above permissible limits of 84 decibels. These aftermarket exhausts also enhance the performance of the bike and increase emission of exhaust gases thereby not only causing noise but also air pollution. The cops under disguise are not checking the exhaust note with decibel meters but just taking on these aftermarket fitments and destroying them on the spot which should sent out a strong lessen to the offenders.