There’s an unsaid pattern when it comes to alloting blame in the case of an accident. More often than not, the bigger the car, the bigger the blame. And while common folk have been doing it for long, it beggars belief that even the police force resorts to this thought process.

No doubt, there could be a drunk driver in a snazzy car at breakneck speed who could wreak havoc onto the lives of other road users, but is it always this one contributing factor that results in death and destruction?

In 2018, 1.51 lakh people lost their lives to road accidents. ??The accident that’s prompted Chandigarh Traffic Police to write an open letter to BMW India via Facebook involves a BMW and a cycle. The crash has left a 17 y/o dead, and his pillion, seriously injured. The car in question was speeding. 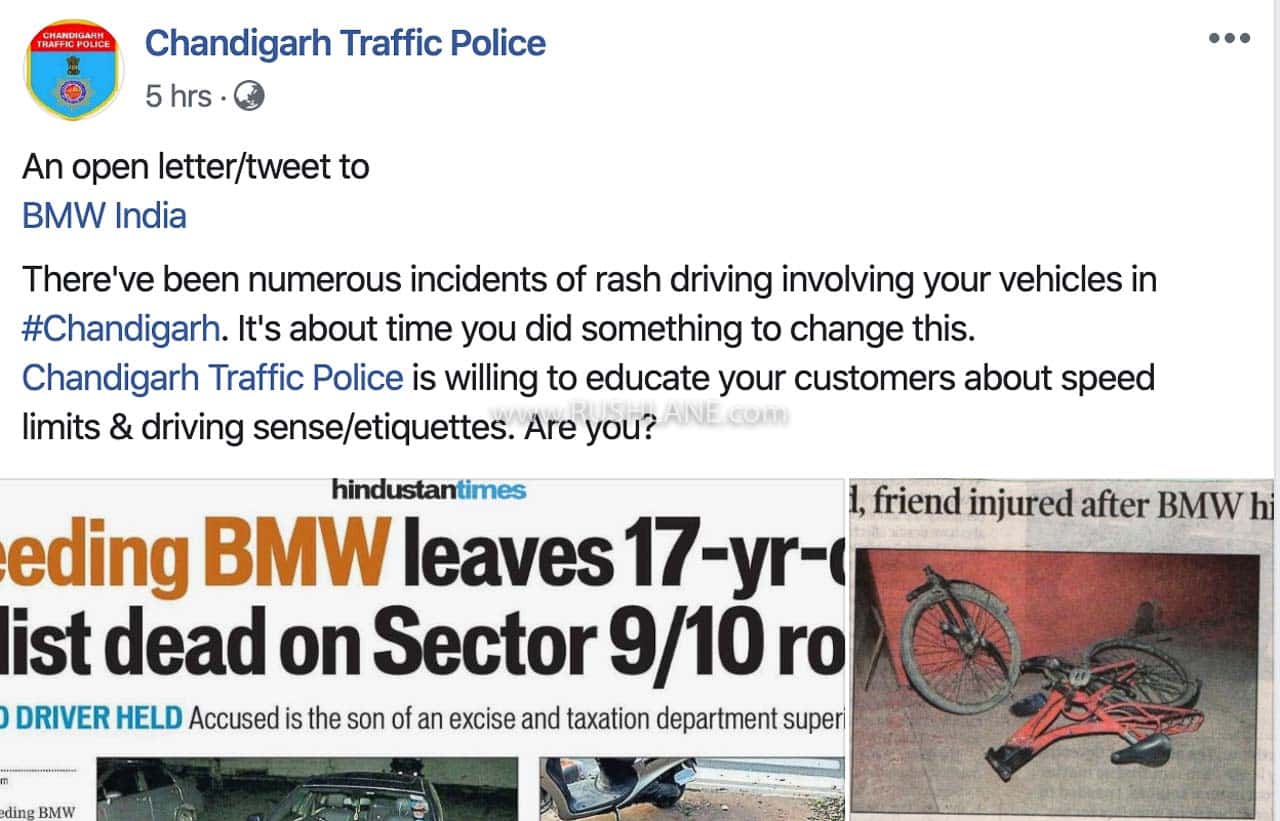 But there are most likely two wrongs here. A speeding car being one, and the other, a cycle in a car lane or vice versa. Considering both vehicles would be going at different speeds if going slowly, leave alone at speed, rightfully both vehicles shouldn’t be on the same lane.

Since, a cycle rides on manpower, and a car on horsepower, even a vehicle maintaining speed will cause grievous injury to a cyclist in the lane if contact is made. But this is not how our roads functions. In this case either the BMW was in the slow lane or the cycle in a fast lane. This is the fault that should have been rectified. There’s also the question of visibility, and how well the streets are lit, among others.

We are quick to judge, make comments, and are known to resort to immediate response rather than wait for police. We are also not the quickest to call for medical help, and are most likely to tamper with an accident site by the time the PCR van reaches.

Chandigarh Traffic Police says ‘There’ve been numerous incidents of rash driving involving your vehicles in Chandigarh. It’s about time you did something to change this.’ At face value then, the coppers have identified ‘rash driving’ as the underlying reason. They are also adjudging BMW drivers to be rash. Given the statement, and understanding, how is a manufacturer to thwart rash driving? Read the post on Facebook.

Would this not be a ‘non-issue’ if rash driving behaviour identified, and penalised in a timely manner. Are the street cameras so ineffective that no one cares a damn and keeps driving rashly? Do we not care that rash driving will result in point penalties and hefty fines? And is speed not a contributor in case of an accident, and not the only issue.