At 221 Nm of torque, the Triumph Rocket 3 GT generates the highest torque output by any road-legal production bike

Triumph Motorcycles India has launched the Rocket 3 GT at a price of Rs 18.4 lakh, ex-sh. The motorcycle was launched last year at various international markets. The Rocket 3 and 3 GT holds the unique distinction of being the largest displacement production motorcycle in the world

The Rocket 3 GT is powered by a humongous 2500cc which produces a power of 165 horses at 6000rpm and a peak torque of massive 221 Nm at 4000rpm. When compared to the previous generation Rocket 3 GT, this new engine features an altered lubrication system, crankcase and balance shafts. This engine is coupled with a 6-speed transmission.

Triumph offers two variants of this model, R and GT. The R is a roadster variant with a more aggressive riding stance with a sportier handlebar whereas the GT is a more of a cruiser with a touring style handlebar. It also gets a backrest for the pillion seats which enhance the touring look. 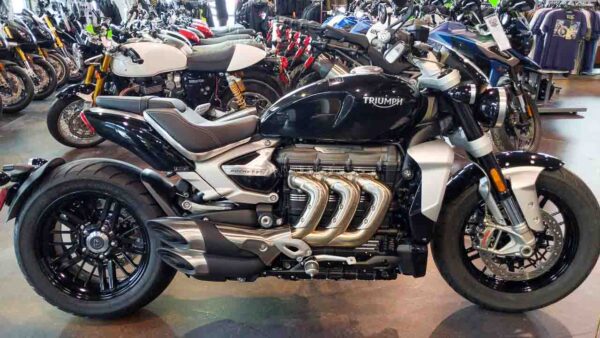 The muscular sculpted fuel tank enhances the sporty feel of the bike. It gets its signature dual-LED headlamp unit with integrated DRLs and maker’s logo inside. The Rocket 3 GT is offered in two colours- Phantom Black and Storm Gray with silver ice.

In terms of dynamics, it gets a lightweight aluminium cradle which reduces its weight by 40kg. Suspension duties are carried out by a 47mm inverted fork at the front and a mono-shock at the rear which are fully adjustable. Anchoring duties are taken care of by 320mm disc brakes assisted by Brembo callipers. It gets a 17-inch wheel with 150/80 profile tyre at front and a 16-inch wheel with 240/50 profile tyre at rear.

When it comes to features, the list is exhaustive. Triumph has thrown in every high-tech electronic available to its flagship offering. It comes with Triumph’s second generation TFT screen and keyless ignition. It also gets four riding modes that adjust the throttle response accordingly and a traction control system. Some other highlights include Google navigation, clutchless shift, MyTriumph connectivity app and cruise control among many others.

Mr. Shoeb Farooq, Business Head, Triumph Motorcycles India Pvt Ltd said “The Rocket 3 GT is an enthusiast’s machine, being an ideal amalgamation of class defining technology, dominating road presence, astounding performance and ergonomics. It is a legend in itself. The Rocket 3 GT completes the Rocket range which has the roadster and touring variants. With this we also strengthen our BS-VI offering in India to 13 motorcycles which is the largest BS-VI line-up in the premium motorcycle space in India.”