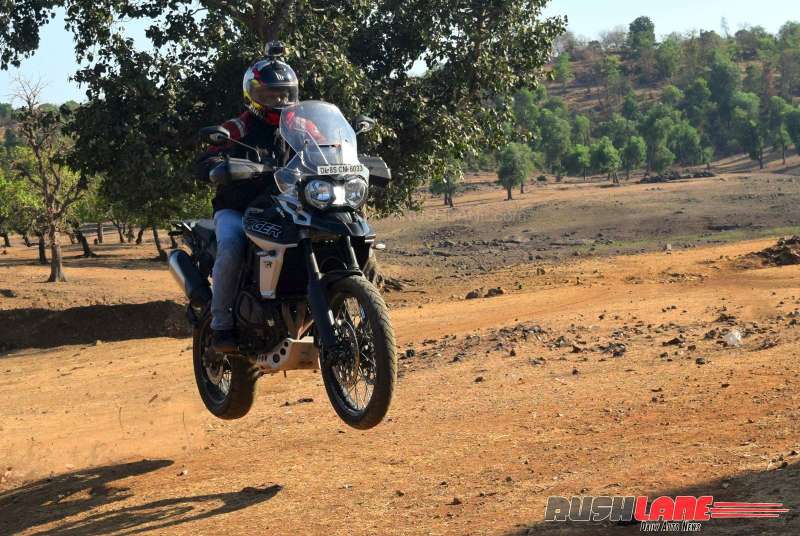 The Triumph Tiger has always evoked a deep sense of adventure, roaring down the trails to the raucous soundtrack of a screaming inline three motor, the sliding rear tyre and the suspension dancing to the undulationsThe design reeking of enthusiasm to take on an apocalypse- hop onto the Tiger and you’d simply want to go trail bashing.

Twist the throttle and the Tiger roars with augmented ferocity. The 800cc inline three feels more refined, responsive and the exhaust sounds throatier than the outgoing model. The gearbox feels slightly disappointing- though it’s not notchy or clunky, but needs a harder tap to slot the cogs in place. The trademark whistling sound is barely audible once the motor climbs up the rev-range. As in the case of the new Street Triples- the Tiger is an acoustic delight on stock exhaust and one wouldn’t really need to switch to an aftermarket unit.

Despite packing in less than a 100 horses- 95ps to be precise, the Tiger 800 XCX feels more powerful than it actually is- thanks to shorter gear ratios complemented by a compact growlier exhaust unit which adds to the exhilaration. Fueling is precise- thanks to the Ride-by-Wire throttle with the new Tiger trotting along at 45 kph in sixth gear and only starts to stutter when the revs fall below 2000 rpm. 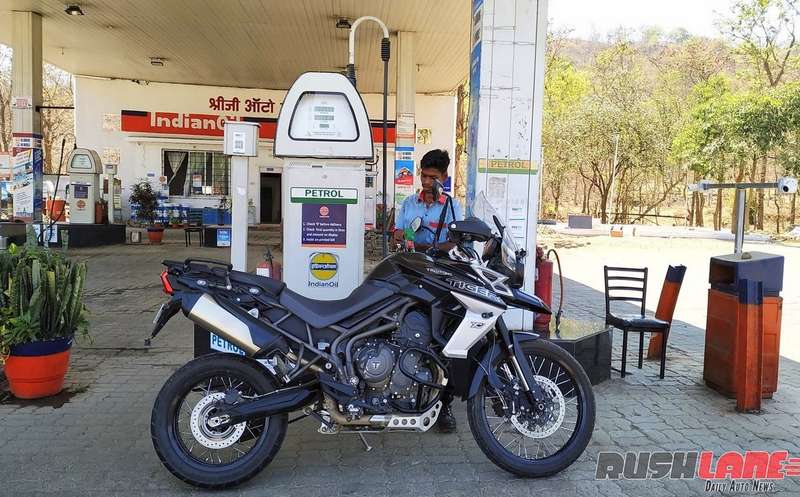 Overall, the engine on the new Tiger 800 XCX would offer enough tractability going off the road, while the inline three concerto will keep you thrilled as you munch miles over long distances. With five ride modes to choose from i.e. Rain, Road, Sport, Off-Road and Off-Road Pro, the new Tiger 800 XCX caters to a wide range of riding traits. The engine heat however gets unbearable at times in stop-go scenario, hence its best that you keep the Tiger away from traffic. 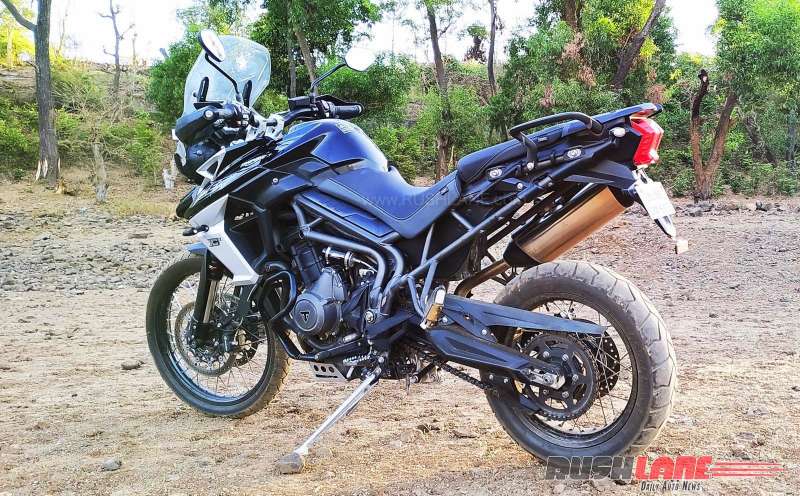 The Tiger belongs to the trails and it delighted with its off-road manners. Being 5’-8” I could barely tip-toe, and while being vertically challenged it wasn’t a good idea to take the Tiger off the road- just in case there’s a loss of balance. But the stability had me surprised! It has to be one of the most effortless adventure motorcycles to hit the trails astride. Stand up on the pegs and maneuvering it seems as if you have been riding it for years together. The shorter first gear brings about a huge change in tractability at low speeds while you roll and hop over loose undulations. The “Off-Road Pro” allows you to adopt a more hardcore trail ride as you over-spin and slide that rear.

The ABS equipped Brembo braking unit offers stupendous braking ability- however while it may delight you with its ability to shed speed on tarmac, you would wish for a softer grab on the rotors while off-road. Wishful thinking- but similar to ride modes, we wish there could have been braking modes for both on and off-road on adventure touring motorcycles. 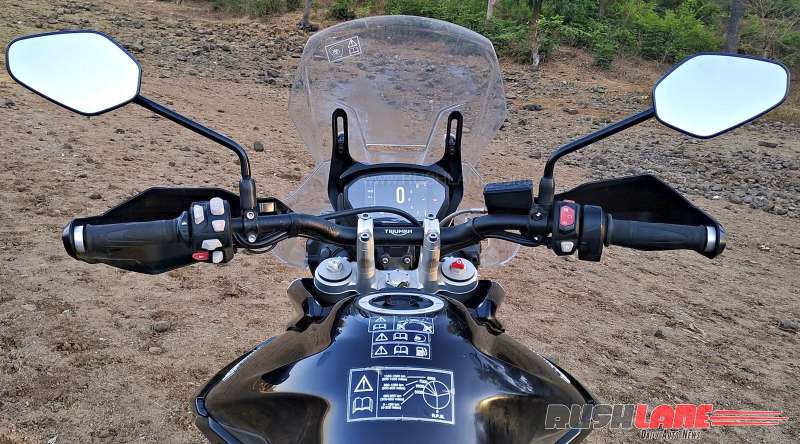 The new Triumph Tiger 800 XCX exhibits brilliant on-road etiquettes as it does off the road. The Bridgestone Battlewing tyres on the test bike had squared off in shape- yet it offered more than expected road holding ability. While turn-ins take slight muscling due to the 21” font tyre- but at no point do you feel nervous going around at a leaned angle.

The 220mm travel front suspension provides enough resistance from broken and jittery surfaces, but using the same settings on road is distracting due to the front end dive under hard braking. Thankfully it’s adjustable and it takes a few rotations on the fork dial for the right setting. The rear suspension is adjustable and didn’t need much fiddling offering great compliance over broken surfaces. 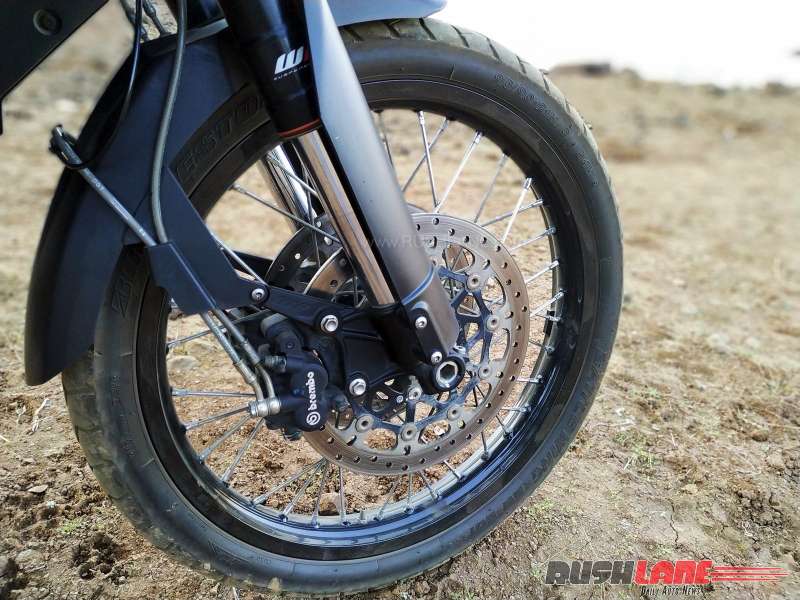 The new Tiger offers more comfort than before- the seat seems to be tuned and offers a plush feeling for the rider- the pillion seat is no different. Anchor points on the motorcycle are near perfect and entails for extended duration and ride distances. The windscreen fends off most of the wind drag off your upper body, but much of it can still be felt at the helmet. However, the screen is vertically adjustable and takes care to deflect wind off the helmet to a larger extent.

Other notable highlights include the new 5 inch TFT display carried over straight from the Street Triple RS. With an integrated ambient light sensor- it offers amazing legibility of the numbers under all lighting conditions. The new lights are brighter with adequate depth and spread on dark stretches, yet don’t hold much in way of oncoming high beaming traffic. Heated grips, ergonomic switchcubes and perfectly placed rear view mirrors add to the Tiger’s score on the merit list. 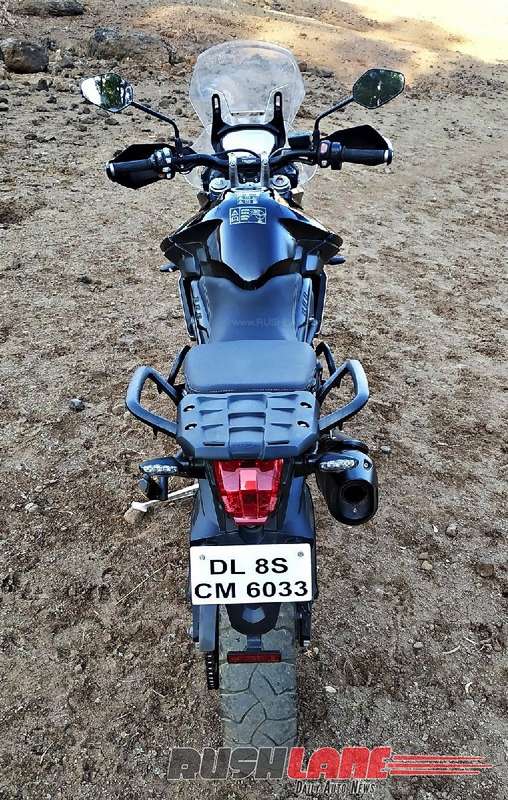 Summing it up- a ride on the new Triumph Tiger 800 XCX proves its success on the sales charts. The contemporary Tiger styling to go alongwith fabulous on and off road demeanors- it would appeal to every rider, new and experienced alike who fancy adventure motorcycling. With a motor that feels submissive on demanding off-road ventures would also keep you thrilled with its trademark inline three symphony on road riding. At INR 14,03,500 (ex-showroom) onwards, it ticks all the boxes you would expect from an adventure touring motorcycle and with enough riders out there showing why you can’t go wrong with a Triumph Tiger.