Home Everything Else TVS Apache 310 rear brake lever comes off while riding - Owner...

Disclaimer – The manufacturer (TVS Motor Company) has blacklisted Rushlane from it’s events/rides as a consequence of decisions based on restrictive practices. This blog is reliant on available UGC and customer input.

There was a promo video of Royal Enfield Himalayan, which showed ace rider CS Santosh taking the bike through a dirt track. There were jumps as well. After taking one jump, and during the landing, the video by mistake showed the brake pedal of the bike falling, and for a split second, CS Santosh losing balance. 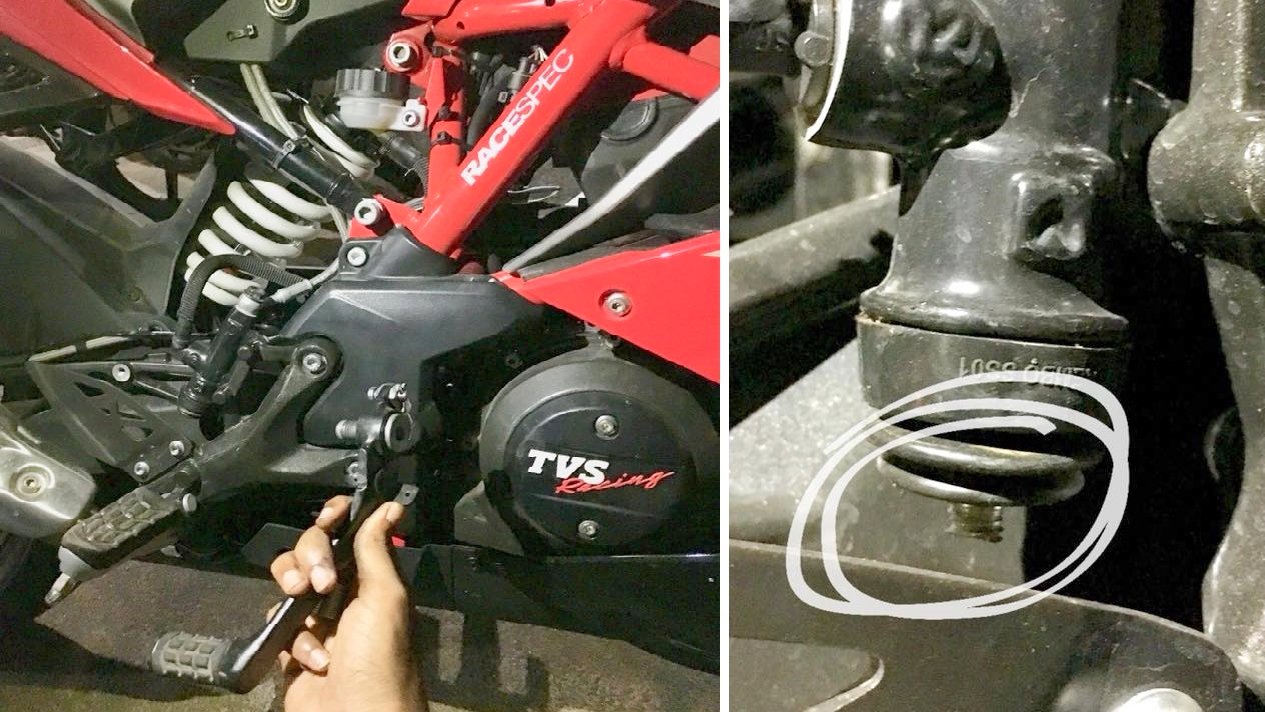 Well, same is not the case with TVS Apache 310 here. But, yes, a brake lever did fall. As per the owner of this bike, Vasista Dutt says that he was riding through traffic when suddenly the brake lever fell on the ground. This is what he has said on a popular Facebook Group – TVS Apache RR 310 (Akula) –

“I’m literally in shock for what just happened to my bike.I was riding in the traffic and suddenly the back brake of the bike just fell to the ground. One of the bolts connecting the brake pedal broke in half. I have ridden this bike for only 600km and I have never ridden it past 90 kmph. Has this happened with anyone else or am I the first victim??” 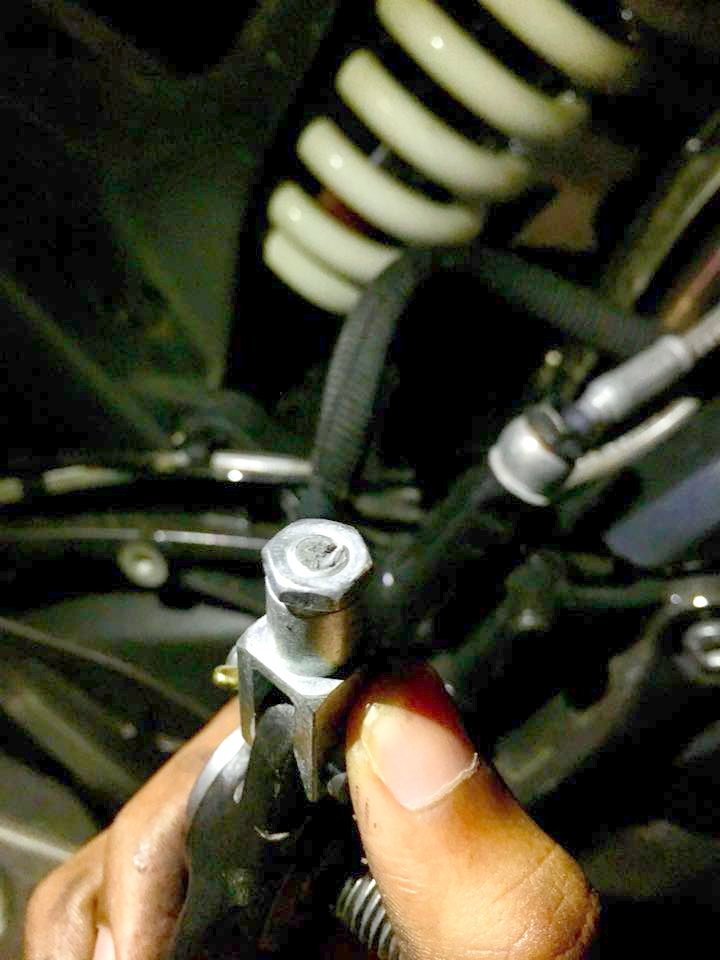 The incident is surprising for sure. Cause the part which the rider is talking about is made of cast aluminum and it is not easy for parts that are made of cast aluminum to break in the manner shown by the owner. Also, this is the same part that is used by BMW in export-spec G310R and G310GS. 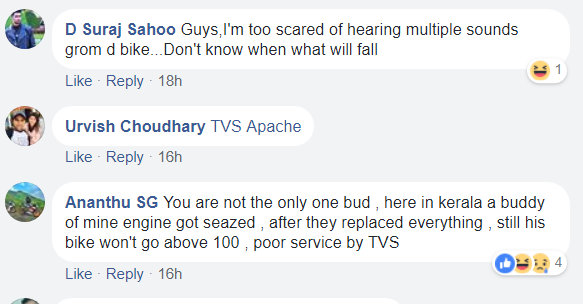 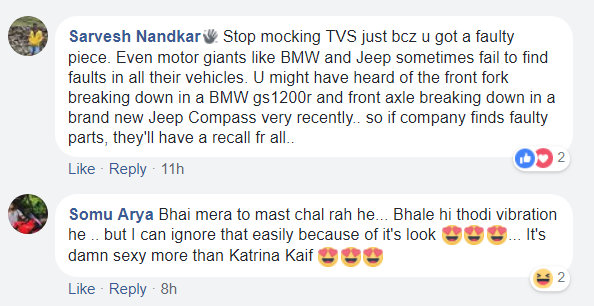 Priced from Rs 2.75 lakh on road Bangalore, the new TVS Apache 310 is a rival to KTM 390. It is the flagship two wheeler of the company, which excels in selling rickshaws and mopeds.

After the post went viral on social media, TVS decided to replace the broken part. But as they did not have stock of that part, the dealer decided to remove the part from a brand new TVS Apache 310 and install it in that of Vasista’s bike. Below is the update posted by Vasista (he has deleted his old update).

“Feeling very happy with the customer service provided by TVS.They responded immediately and fixed the brake issue with my bike.My bike got repaired first thing in the morning free of cost.They said the spare part would take 5 days to arrive but instead replaced the part with one of the new bikes in the showroom.I even got a call from the head office of tvs as they saw the post in fb. They asked about the situation and the progress of the repair.” 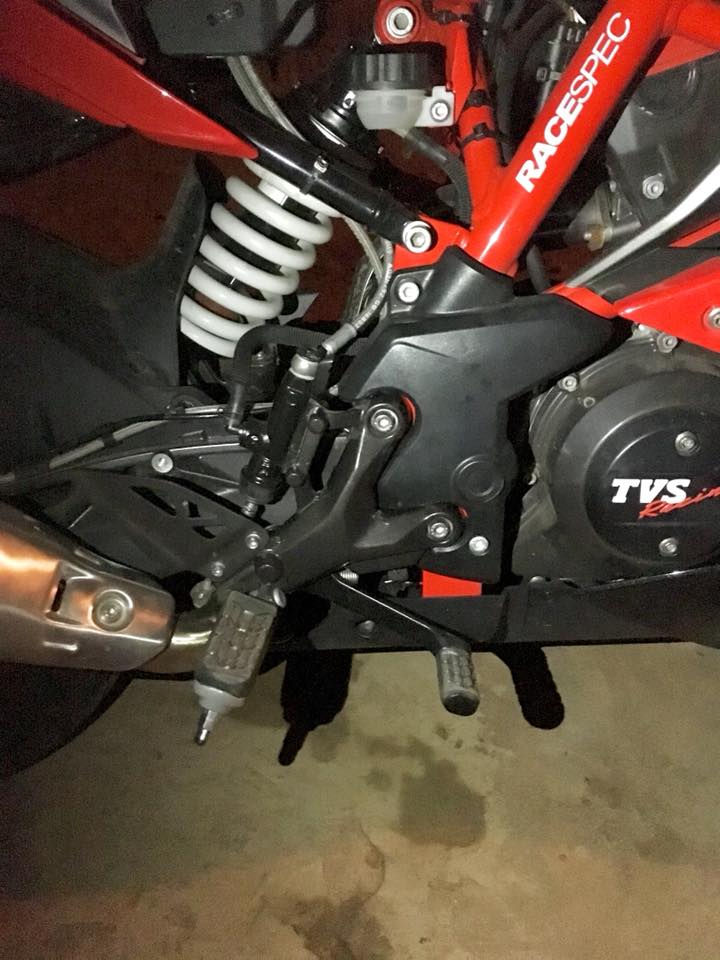 Seems like TVS is actively following the facebook group – TVS Apache RR 310 (Akula). If you have a problem, posting in this group could provide faster results.

Another member, Souryarup Ghosh has posted in the group regarding part unavailability. This is what he says – “I dont know where this group is followed by any TVS officials or not but i want to share my experinece regarding the service and spare parts of the bike..I am from WestBengal.My dealer is Subh TVS, Howrah. On 20th April i have done the first free service of my bike where it is found that the condition of the rear disc pad of is poor. So the service advisor advised me to change the disc pad and not to ride anymore. I told them instantly to order the disc pad whatever the cost is..But till today i havent received the disc pad..
I use to call them frequently but everytime the reply is “No, it is not arrived”. They told me that they have done an emergency order but is this the example of an emergency order? Its more than 1 months a simple rear disc pad is not arrived ..for the last one month i cant ride my bike just for a simple disc pad.
Its my request to the TVS family to look into this matter..We are not investing 2.5lacs to keep the bike in the garage.
I dont know where the problem is with TVS or with SUBH TVS..
Please try to available the parts in the WestBengal region and help me to get my disc pad ASAP.
Its a biggest disappointment from TVS..Its not at all expected from TVS.” 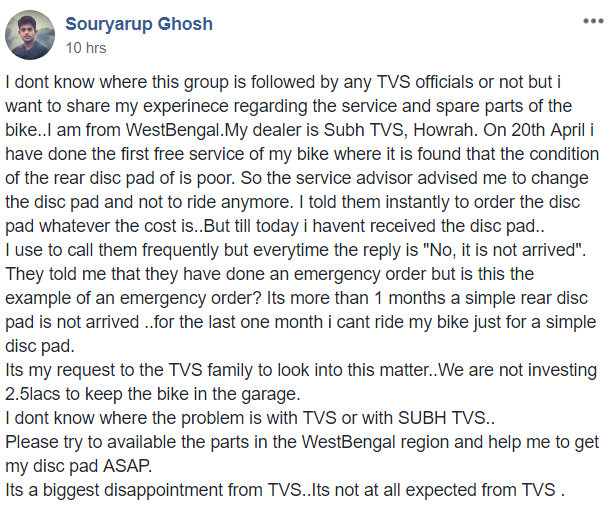 Let’s hope the dealer has a brand new Apache 310 in stock so that he can replace it for Souryarup Ghosh’s Apache 310.