The adventure tourer spotted at a recent dealer meeting conducted by UM Motorcycles has turned out to be called as UM DSR Adventure 200. The motorcycle is identical to the Polish Romet ADV 125Fi PRO and this created a bit of confusion last week.

While the connection with Romet is still unclear, a leaked presentation confirms that the adventure tourer spotted is indeed a 200 cc product. The 196 cc single-cylinder air-cooled carburetor-equipped engine is tuned to deliver 16 bhp and 16 Nm of torque when mated to a 6-speed transmission.

The motorcycle is equipped with inverted telescopic front fork and a rear monoshock. Braking system comprises a disc at each wheel with single-channel ABS as standard fitment. The front and rear tyres measure 100/90-17 and 120/80-17 respectively. 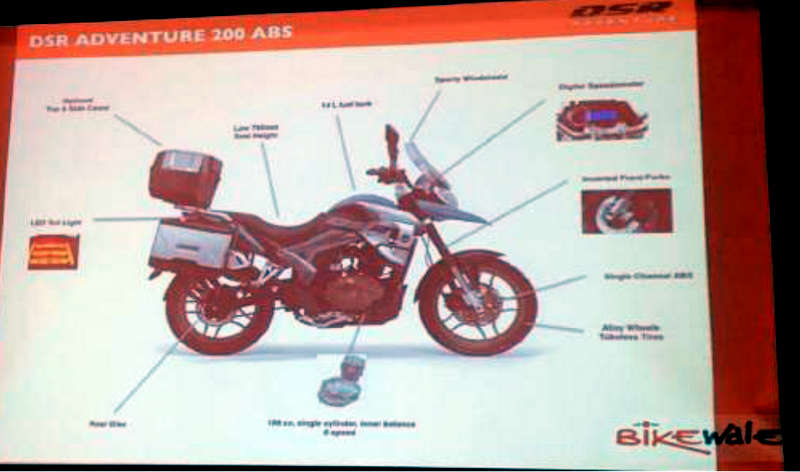 The UM DSR Adventure 200 ABS will be pitted against the Hero Xpulse 200 which is also slated for a 2019 launch. The leaked presentation puts the UM adventure motorcycle at INR 1.39 lakhs (ex-showroom, Delhi) which, in our opinion, is a bit steep for a relatively unknown brand.

Like other UM products, the DSR Adventure 200 would be manufactured at Lohia Auto’s factory in Kashipur, Uttarakhand. So far, UM’s India portfolio consists only of cruisers and the new addition is expected to considerably expand the brand’s audience base.

In addition to the UM DSR Adventure 200 ABS, the American motorcycle brand is also planning to introduce a new flagship cruiser. Spotted alongside the off-roader at the dealer meeting, the cruiser sports twin-cylinders with an estimated displacement of around 200 to 300 cc. We expect the Hero Impulse 200 to be priced lower than its UM rival thanks to the economies of scale.