Update: Air India apologises to passengers who were bitten by bed bugs

It has been a bug-gy week for Air India. With not one, but at least two complaints regarding flights from Newark Liberty International Airport to India. The first complainant tweeted, ‘just arrived from New York on Air India 144 business class with family . All our seats infested with bed bugs. Sir, have heard of bed bugs on trains but shocked to experience on our maharaja and that too business.’

Air India did of course reply in verbatim, ‘We are sorry to hear this, Mr. Pravin. Sharing the details with our maintenance team for corrective measures in this regard.’ 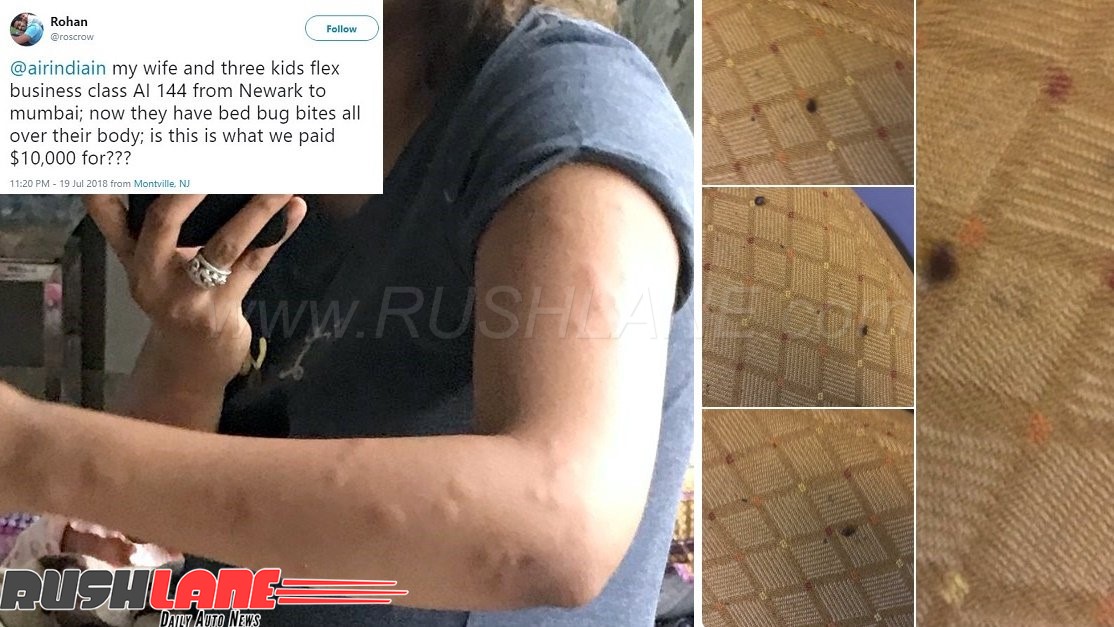 But that didn’t do the company any favours. In fact, Pravin Tonsekar’s bed bug biting experience wasn’t the only that that ruined his family’s trip. With no spare business class seats available, his family was left with no choice but shift to economy and deal with shoddy fitment and a screen that played truant. In his words, ‘Too late !!! Such a thing should not have happened in the first place. My wife and daughters had to suffer half of the journey sitting in economy seats with broken tables and inoperative TV.’

If that wasn’t reason enough to make amends, two days later, another troubled husband took to twitter. Rohan mentions, ‘My wife and three kids flex business class AI 144 from Newark to Mumbai; now they have bed bug bites all over their body; is this is what we paid $10,000 for???’

Air India responded – ‘Your safety and pax comfort is paramount for #AirIndia. Inquiry was ordered on the same day, and responsibility will be fixed. We feel your pain and empathise also. We assure you that we will allow no one to jeopardise safety and comfort of pax.’ 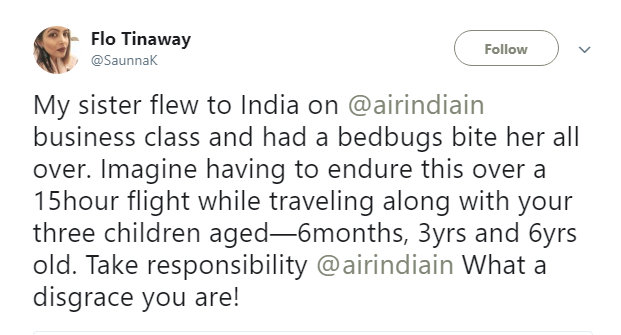 There’s also a third complaint, and the bites look painful. Saumya Shetty tweeted – ‘What an airindia businessclass would do to you? AI still has to get in touch with me inspite if my repeated attempts to get in touch with them.’ Her obviously distraught sister offered a few more details about the hellish trip

Air India replied – “In dealing with the matter, both aircraft in which bed bugs were sighted and reported were fumigated and set covers changed.”

As opinions started streaming in, another past passenger had this to say – ‘I had a similar experience early this year when I spotted a rat in the Mumbai-Newark flight and have stopped taking Air India after that, @narendramodi we also need good airline carriers with airports.. This is shame to Maharaja.’

Update via BBC – Air India has officially posted an apology who had been troubled by bed bugs on their flight. In addition that, they have stated that the said plane has been thoroughly fumigated so that there are no more bed bugs.