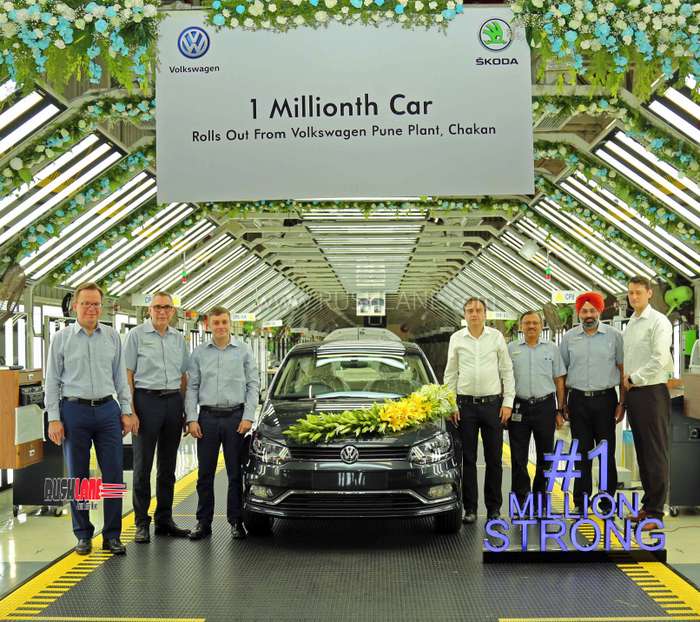 Volkswagen India has announced the achievement of an important milestone today. Car production from the company plant in Pune, crossed 1 million (10 lakhs) mark today. The 1 millionth car which was rolled out, is an Ameo in an elegant Carbon Steel colour.

Mr. Gurpratap Boparai, Managing Director – Volkswagen India Private Limited said, “Volkswagen India’s production facility is a global benchmark in quality and technological advancement in manufacturing, and it has remained the backbone of our growth narrative in India. On behalf of the entire management, I would like to congratulate the team at Volkswagen India who have worked relentlessly on achieving this milestone today.”

He added, “The roll-out of the 1 millionth car is an important milestone for us in our long term commitment to the Indian market. We would like to build further on this milestone and work towards higher localization, ramping up production and manufacturing world-class products for the country and several other markets around the world in the future.”

Mr. Steffen Knapp – Director, Volkswagen Passenger Cars commented, “The one millionth roll-out of a Volkswagen carline is a testament of our strong brand equity in a dynamic and evolving market like India. This milestone is dedicated to all our employees, customers and strong network that have contributed significantly for the growth of our Brand in India. With this achievement, we look forward to many more such milestones and commit a stronger product portfolio and heightened customer experience in the years to come.”

Volkswagen Group India has announced some major structural changes in the management, as well as in the functioning of the company in the country. All group companies which are under VW brand, will now be operated under the leadership of Skoda India, which is being headed by Mr. Gurpratap Boparai.

The company will invest Rs 7,000 crores for R&D, launching new cars, widening dealer network, improving customer support etc. Volkswagen is calling this as India Project 2.0. The first new car to be launched under this project, will be a new Skoda SUV, based on a locally developed platform called MQB A0 IN. After that 3 new cars will be launched. The aim is to have 4 new cars in India by 2022.