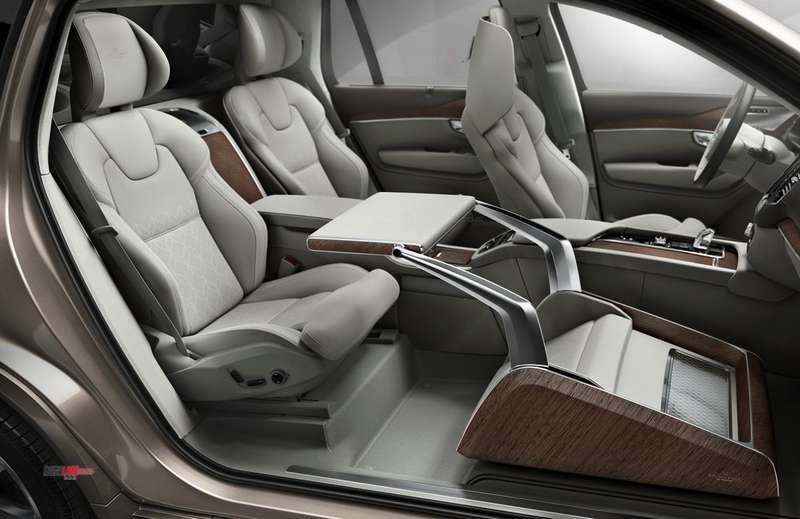 Volvo Cars India has launched its new flagship today. The exclusive Volvo XC90 Excellence Lounge Console, as it is called, is an upgraded version of the XC90 Excellence, which is priced at Rs 1.31 cr. The Lounge Console 3 seater is offered in limited number; in what Volvo has referred to as ‘a limited edition work of art’.

The front passenger seat is replaced by a mobile working and entertainment station with a fold out table, a large foldable touchscreen display, a lockable storage compartment and a storage tray for personal accessories. The table rotates at 90 degrees and powers forward to show off a 17” media screen.

Seating at the rear is in an aircraft style with heating and cooling function along with reclining, electrically adjustable and massage function with a pop up touchscreen that is positioned between the two seats.

The very premium cushioned foot rest, high end 20 speaker, 1400 watt Bowers & Wilkins sound system, Orrefors glass accents throughout the cabin and a fridge in the second row are among its exclusive features.

The Excellence Lounge Console also comes with its elite set of crystal glasses and special champagne flute holders. The cabin is done up in black and beige color scheme and to give passengers at the rear their own space, Volvo has added a glass partition between the cabin and cargo area.

Volvo XC90 Excellence Lounge Console could be powered by the same T8 plug in Twin Engine hybrid system that also powers the XC90 Excellence. This is a 2.0 liter turbocharged and supercharged petrol engine offering 320 hp power with the 87 hp electric motor driving the rear wheels thereby offering an all wheel drive. The two systems in combination offer 407 hp power and 640 Nm torque. Transmission is via an 8 speed automatic unit. Price is Rs 1.42 cr, ex-sh.