Where is my Jawa?

Jawa really needs to address the delivery issues openly. There are too many Twitter accounts posting the same generic tweets and responses to users or people who are asking questions. One can notice the same on Facebook and Instagram comment section as well. Then comes all the social media posts which seem very awkward from the hashtags “apparent owners” are using. You can tell whether the post was made by a PR agency/pre agreed posting guidelines or an individual owner, applies to all brands and products. This is not how you try to cover up things. People who have booked are getting restless and asking questions.

Now this isn’t a dealership problem it seems. The dealer is absolutely clueless on delivery schedules. Ahmedabad dealer is facing a cancellation of several bookings a day since they cannot commit to any timeline, except saying that they will get a few units in the coming week. I investigated this further since it could be a problem pertaining to Gujarat but it wasn’t so.

This is the case across all dealers in the country regardless of tier 1, tier 2, tier 3 status. Dealers are facing the heat of something they are not at fault for, but since they’re the face of the brand to the customers they become answerable. Not a good experience if you’re a dealer who has invested quite a bit of money into this new brand. Bangalore!! A place where Mojo sold the most has just two posted deliveries (Safira Motors) in the month of April. A place where even the niche of niche motorcycles sell in numbers. 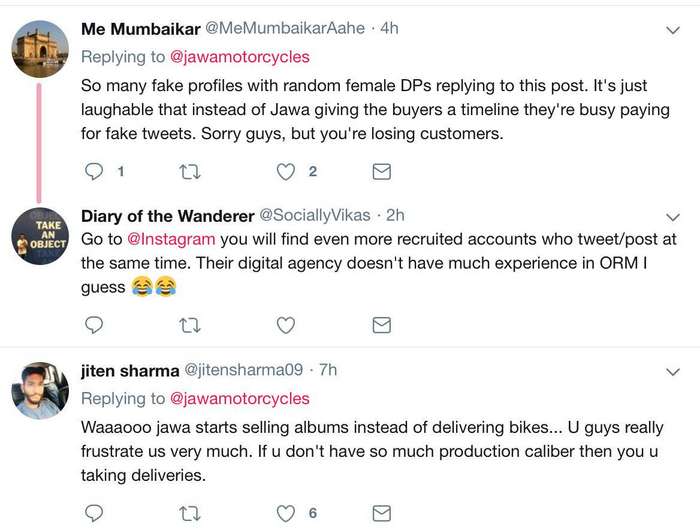 All the goodwill that Jawa has built over the past few months is at a risk of being a flaming trainwreck if Jawa doesn’t openly declare the problems it is facing in getting deliveries done and give a firm timeline to it’s dealers and end users the distrust will be not repairable. Word of mouth can make or break a brand. This is not pre 1993 era where one had to wait for years to get a Priya scooter or a Padmini since production was artificially limited by the government.

From my estimated guess it seems Jawa (Mahindra) has totally screwed up with it’s vendoring of one or several essential components that go into Jawa. Either the vendor cannot supply the parts to a quality that is needed or vendor supply was severely overestimated. Is this a problem between the manufacture and it’s vendors? I don’t know since people have been kept in the dark. The motorcycle has already passed all certifications by ARAI to be legally sold in the country.

I’m not the only one questioning about this. At this point people are comparing it to the Freedom 251 scam because some of the people did receive the phones while others hoped that they would get it next and we know how it progressed.

Enthusiasts can sell their soul for their desired motorcycle and wait for it or accept unfair conditions but not the mass market, once the distrust sets in, the uphill struggle to restore brand value will be more than what it took to launch the brand. It took Tata incredible effort and expenditure to become a top selling brand after their huge decline from Indica days.

Owe up, explain the hurdle that the company is facing to it’s dealers first who have invested crores and then the customers waiting for them. If you don’t this will turn into a big dumpster fire. Don’t become another Fiat, no one will trust you. The sad part is the actual motorcycle is good and is decently specced.