Although Aerox will be using the same 155cc motor, it will have lesser power than YZR R15

Yamaha is testing a number of new / updated products that are expected to be launched in the coming months. Additions to the list include a new variant of YZR R15 V3. The name registered by the company is R15M. This new variant is likely to be a new top of the line R15 variant, which will get sportier styling, new features like Bluetooth, etc.

Yamaha will also be expanding its scooter portfolio to include its first maxi-scooter for the Indian market. Earlier this month we had reported that Yamaha will be launching a new scooter based on R15’s 155cc engine in India by Diwali 2021. It will be the new Aerox 155, as Yamaha has homologated the same in India.

Maxi-scooter segment is largely untapped in the Indian market. It’s good to see that some OEMs have started exploring this space with the aim to gain the first-mover advantage. The current options are fairly limited to a few products such as Aprilia SXR 160.

Yamaha will be entering this space with Aerox 155. The scooter is already available in several south east Asian markets such as Indonesia, Thailand and Philippines. As per the Type Approval Certificate, Aerox for the Indian market measures 1980 mm in length, 700 mm in width, and 1150 mm in height. Wheelbase is 1350 mm.

Aerox will be using the same engine as that of R15. However, it will come in a detuned state, generating close to 15 ps at 8,000 rpm. The maxi-scooter is expected to get a range of connectivity features accessible via Yamaha’s mobile app.

Yamaha R15M is likely to be a more sportier version of the R15. Recently, new Yamaha motorcycle was spotted on test in India. It is still unclear as to what that motorcycle could be. But with this new homologation details out, it is likely that it was the Yamaha R15M, and not the R3 or the R2 or the R15 V4 as reported earlier.

Yamaha uses the M tag for the performance oriented versions of their standard motorcycles. The spy shots reveal that the R15M will get a new headlight unit, inspired by the R7. It will also get the USD forks. R15 is already available with USD forks outside India, but for India it is available with regular telescopic forks. Finally India will get USD forks on the R15 V3, with the new R15M variant.

It is mated to a 6-speed constant mesh transmission. The bike is equipped with advanced features such as variable valves actuation (VVA) and assist and slipper clutch. It also has integrated side stand engine cut-off switch.

Dimensionally, R15M is the same as R15 standard variant. The bike measures 1,990 mm in length, 725 mm in width, and 1,135 mm in height. Wheelbase and ground clearance is 1,325 mm and 170 mm, respectively. Braking apparatus comprises 282 mm front and 220 mm rear disc brakes. Dual-channel ABS is offered as standard. Expect prices of R15M to be higher than the standard R15 V3, thanks to added features, new styling. 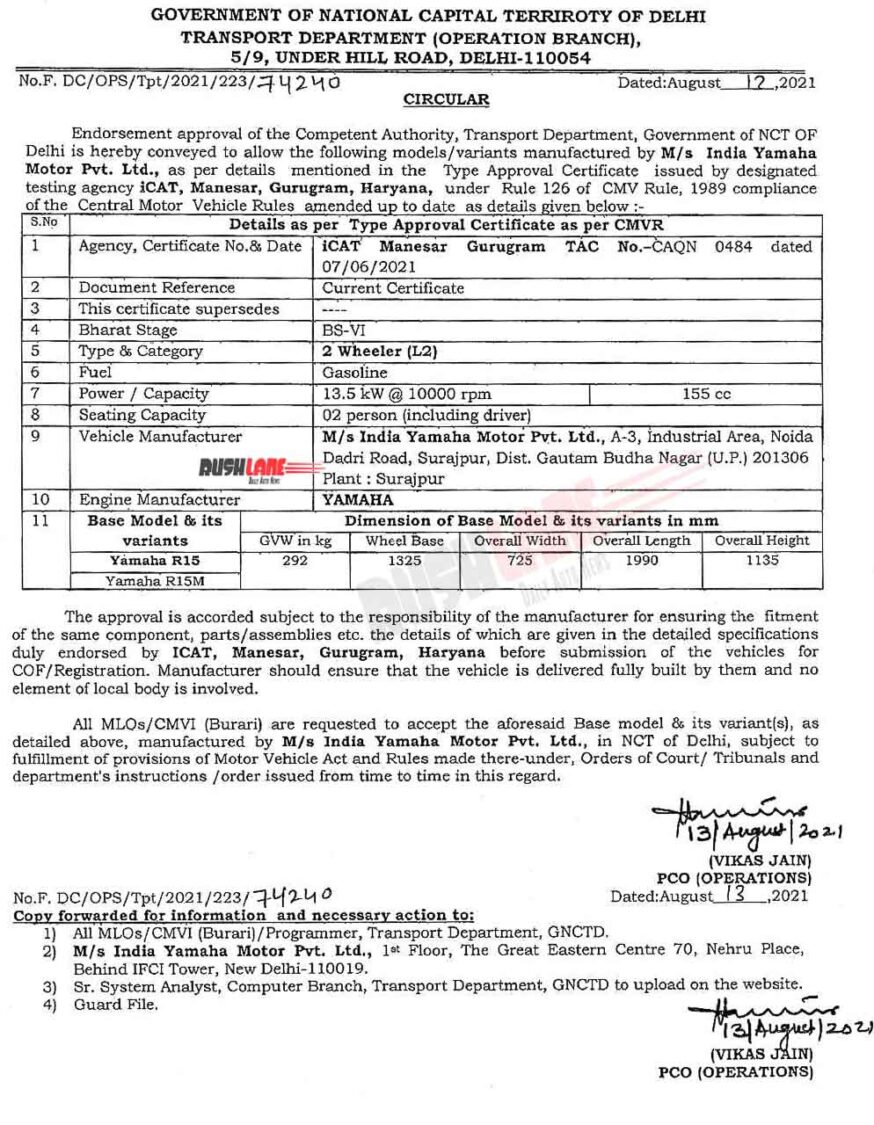