Japanese automaker Yamaha launched the BS6 compliant variants of FZ-FI and FZS-FI in India at the end of 2019. Both the models received several upgrades over their respecting outgoing counterparts with new fuel tank, single piece two level seat and a fully digital LCD instrument cluster along with black finished alloy wheels.

In keeping with the company’s endeavour to keep ahead of the times, a new Yamaha Motorcycle Connect X Application with Bluetooth enabled technology has been introduced. Initially this feature will only be offered on the Yamaha FZS-FI Dark Knight BS VI variant, but will soon extend to the series of FZ-FI & FZS-FI (150cc) motorcycles. The device is also offered as an added accessory, available via the company’s authorized dealerships in the country.

With this new connectivity feature, under the company’s campaign ‘The Call of the Blue’, the price of Yamaha FZS-FI Dark Knight has been increased to Rs.1.07,700 and will go on sale from 1st November 2020. Named Connect X, the name denotes Connectivity and Innovative Technology while ‘X’ represents Connected Technology allowing the user to understand their bike better in terms of performance.

Take a look at the official video from Yamaha, explaining all the features of this new bluetooth connectivity on board the FZS-FI. It also explains how to connect your existing motorcycle to the app, in case you have purchased it as an additional accessory via authorized Yamaha dealer in India.

To be downloaded from the Google PlayStore or Apple iOS, The Yamaha Motorcycle Connect X App involves easy step by step registration to identify the user and sync the bike to this app. Once registration is complete, the user is offered a wide range of feature, each designed to enable the rider connect with the bike by a single touch on the mobile.

The Yamaha Motorcycle Connect X App offers 6 features of Answer Back, E-Lock, Locate My Bike, Ride History, Parking Record and Hazard. The Answer Back facility sets off the indicators to start blinking and the horn to start beeping. E-Lock allows the user to lock the bike to prevent theft while on clicking on Locate My Bike, all four indicators light up for 10 seconds. 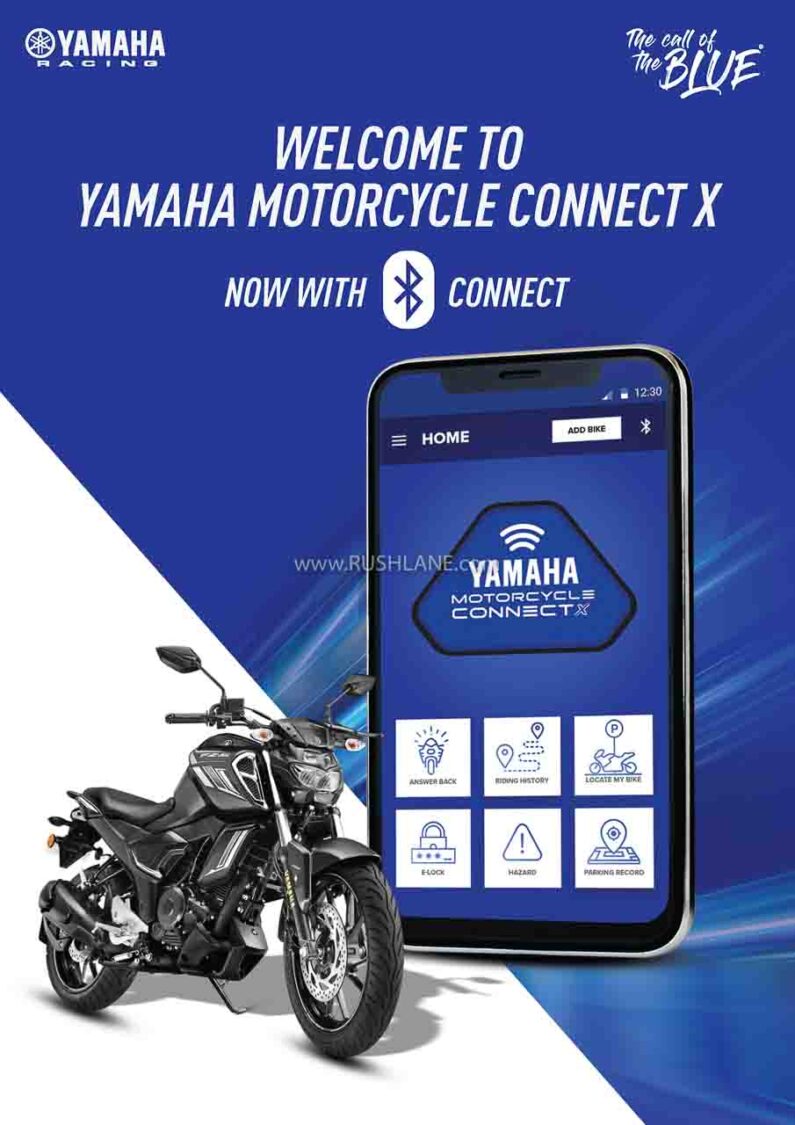 Ride History offers the user detailed information on trip details with regard to distance travelled, speed, battery voltage usage etc. The Hazard feature alerts the rider and others on the road when the bike is undergoing some distress. All four indicators start blinking continuously. Parking record shows the route map from current location to where the bike is parked thereby directing the user to the bike in a cramped parking lot using GPS.

Yamaha FZ-FI and FZS-FI are powered by a 149cc air cooled engine which produces 12.4 hp power at 7,250rpm and 13.6 Nm peak torque at 5,500rpm. This is around 0.8 hp and 0.8 Nm lower than their BS4 counterparts while transmission is via a 5 speed manual gearbox. Both the bikes receive disc brakes at the front and rear with single channel ABS while suspension is via telescopic fork in the front and swingarm monoshock at the rear.