Yamaha Motor India has announced its sales performance for the month of July 2020. After a considerable gap, the Japanese two-wheeler manufacturer has reported positive sales figures. The Indian automotive industry is still recovering or adapting to COVID-19 pandemic that had let to a near two-month nationwide lockdown earlier in the year.

If we take the entire Indian automotive market, major OEMs have started witnessing positive market performance or minimal losses. It is worth mentioning that automotive sales in India had hit virtually zero units in April 2020, the peak of India’s COVID-19 lockdown protocols.

It may be seen from the attached table that the Ray, FZ, MT15 and R15 models showed positive sales while others were in the red. Sales of the Fascino dipped by almost 11 per cent to 11,584 units in the past month; down from 12,984 units sold in July 2019. Sales of the Yamaha Ray increased by nearly 30 per cent to 12,032 units in July 2020. This is up from 9,272 units sold in the same month of the previous year. Yamaha Motor India’s new online sales platform has played an import role in this. 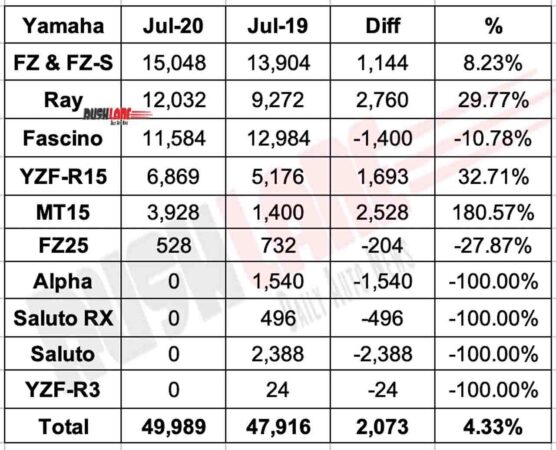 Earlier this month, Yamaha increased prices of the Fascino 125 and Ray ZR 125. Though no reasons were revealed, this move was most likely due to rising input costs and adverse market conditions. Following the price revision, Yamaha Fascino 125 has become costlier by Rs 1,500 while the Ray ZR 125 went up by Rs 2,000. The new pricing now puts the Yamaha Facino 125 at Rs 68,730 for the base ‘drum brake’ variant as against its earlier pricing of Rs 67,230.

Yamaha has discontinued several two-wheelers in view of the upgrade to BS6 emission standards. The brand no longer finds it feasible to continue selling the Alpha, Saluto RX, Saluto 125 and SZ-RR V2.0 along with the YZF-R3.