Much awaited naked street motorcycle, Yamaha MT15 is all set to be launched in India. Fans have waited for a long time for this motorcycle. Launched a couple of years ago in the international market, the bike was an instant hit in many countries where it is on sale. So why this delay in India launch?

Due to price constraints, it was not being launched in India. Cause this 150cc segment motorcycle retails for about Rs 1.7 lakhs, as per today’s currency conversion rate in Thailand. In India, not many will be paying that kind of money to a 150 cc single cylinder naked street bike. Which is why Yamaha India has stripped the MT15 of its many features, to make it feasible for the Indian market.

Over the last few months, engineers at Yamaha India were busy figuring out a way to bring the price down of MT15 in India. And the leaked photos of India-spec MT15 confirm that they have successfully managed to do that. The three major differences found in India-spec MT15 – it is devoid of USD forks in the front, alloys are different, fuel tank is less contoured.

With launch scheduled for 15th March, many authorized dealers of Yamaha India have shared ads of ‘Bookings open’ on social media. One such dealer ad is listed below. Most of them are using photo of international spec MT15, as the India-spec MT15 is not yet revealed. 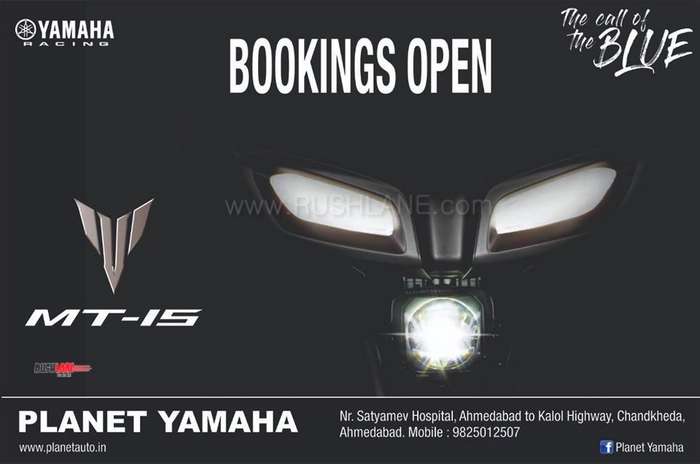 A few dealers we spoke to, confirmed that bookings are being accepted at a varied pricing. Some dealers are charging Rs 1k, some are charging 2k, some are taking 5k, while some are not taking any amount, just noting down the name and contact number of the person.